The Park Slope of Colin Quinn’s ’70s youth was not dotted with Corcoran offices and mostly white faces. By his account, it was possibly the most integrated neighborhood in the history of the world. “It was a special place to grow up. Everyone felt it—except the murder victims,” Mr. Quinn writes in The Coloring Book: A Comedian Solves Race Relations in America. The book and a new Off-Broadway show inspired by it are a nostalgia-fueled ethnography of the city and an exhortation for everyone to be less mealy-mouthed when talking about race. We caught up with Mr. Quinn at the Cherry Lane Theater, where Colin Quinn: The New York Story (directed by Jerry Seinfeld) runs through August 16. When he’s not on stage, Mr. Quinn is filming Cop Show, a web series born of his bitterness over never having been offered a decent part on Law & Order.

On Jimmy Fallon, you seemed genuinely touched that Amy Schumer texted you a picture of a dog pooping on your new book.
She had to get the book, bring it to her sister’s house, get the dog and go to the trouble of timing it so the dog could poop on it. It was a nice thing.
If she had said, “Hey, congratulations on your book,” I would have been like, “Oh, she’s not my friend.”

What have other reactions to the book been?
Look under the thesaurus under apathy, and that’s been the general reaction.

In the book, addressing the black community as a white person, you write, “There’s no way 100 percent of the evil is on us. How about we take 80 percent … and 20 percent of your problems you take for yourselves?” White people just can’t talk like this. How do you get
away with it?
Who knows if I do? No one’s reading it. All the black people I know, they know it’s true. Even if you disagree a thousand percent with what I just wrote there, racial discussions aren’t where we all say what we agree with, it’s where we say what we disagree with and chop it out and get a little bloody. But it’s always like, Shut it down quick. Until there’s a TV show where everybody discusses this out in the open, this is just talk.

Why don’t you do that show?
I would love to. But I wouldn’t be allowed to do it in today’s culture. A show about race hosted by a white man? Everyone would be horrified so it’s not going to happen. People will say “I’m a little troubled that a white guy is trying to use his unconscious privilege…”

A few years ago in May 2012, you tweeted “I’m not a racist who believes in white privilege but I do believe very strongly in white power.” People went crazy and said Colin Quinn is a racist. What were you doing there?
Just being funny. Trying to be amusing. People went crazy. People came down on me. They take it seriously on Twitter. You can’t really show sarcasm on Twitter. I just thought it was obvious. I just thought it was funny but apparently not.

You never had to issue an apology, did you?
I don’t like to apologize. I know where I’m coming from. I have nothing to apologize for. It would be stupid.

So what happened to Trevor Noah? After he was announced as Jon Stewart’s replacement, someone dug up tweets that people found anti-Semitic. How come he didn’t get away with it? It blew up in his face.
Because he’s following Jon Stewart. Everyone is subconsciously pissed that Jon Stewart is leaving. And it’s that whole European, South African anti-Israel school that they all think is intelligent. He was a kid in his 20s trying to be deep. I guess he was just parroting that, and he found that in America, we don’t like that. There are still plenty of people who feel they are being intellectual when they are blaming Israel for all the problems in the Middle East.

But it didn’t blow up in his face. He still has a job. I know Trevor Noah. Funny guy. He’ll be great. But like I said, if that’s his opinion, he should be able to say that opinion.

Who are your fans?
I don’t have a demographic. I have random people who get into me sometimes. When I go on the road, I’m not selling out 1,200 seats or even 800-seaters. I’m respectable. I’m consistent but I’m not a big name.

Is that a comfortable spot for you?
No, I want fucking more.

How do you get it?
You’re asking the one guy who really doesn’t know. I know a lot of things. I know how to keep my name out there and write and do a lot of different things, but I’m the fucking worst. I’m the most famous broke person in the history of this goddamn business. It’s ridiculous.

Would you compare your annual salary to a fireman, a teacher, an entry-level analyst, a banker?
Less than a banker. More than a fireman.

How about your friend Jerry? He’s doing all right.
Oh yeah, he fucking does it right. [Quinn bites his hand for effect.] What am I supposed to do, say give me some money?

In your show, you riff on every group but the rich. How come?
They’re too boring. When I read Bonfire of the Vanities, every time I got to the rich section I was bored and I had to force myself to read it. Park Avenue is boring to me; their lives are boring to me. I know they’re a big part of New York but I can’t get interested in them.

Will you ever move back to Brooklyn?
No. I love it, but I love it for what it was. When I go to Bushwick or Prospect Heights, it looks like what the Park Slope of the ’60s and ’70s: very racial, intermixed, old and new, ghetto and trendy. But everyone I knew is gone. They’re spread out all over the world now. There’s no point to going back. 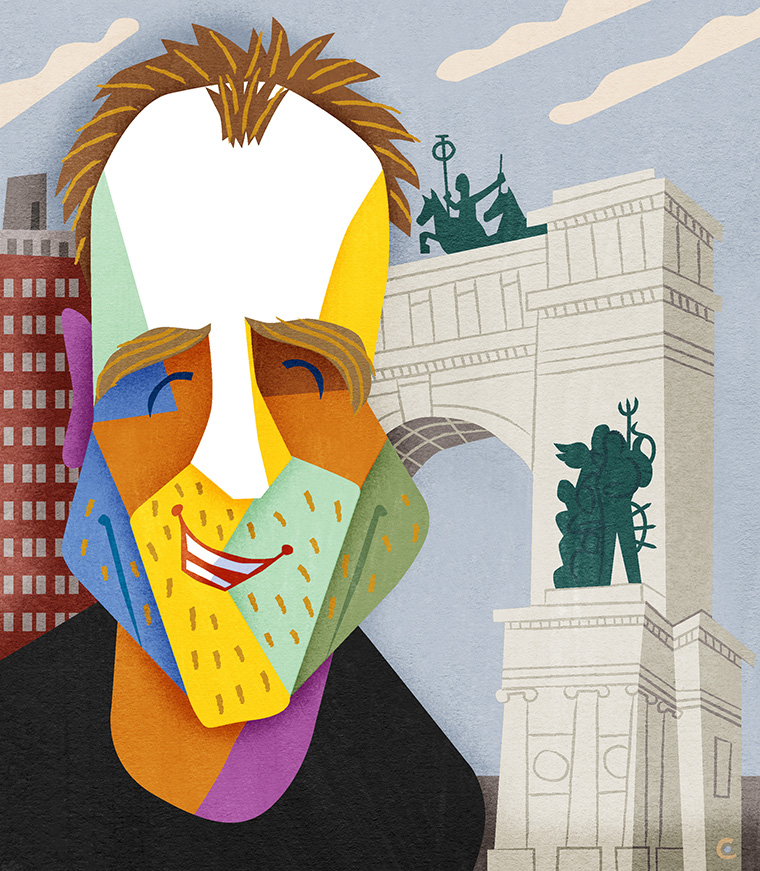