At least two candidates are vying to replace ex-State Senator John Sampson of Brooklyn—who was forced to resign the seat on Friday after being found guilty of corruption charges—insiders told the Observer.

Sources say former Bloomberg administration official Samuel Pierre and small business owner Mercedes Narcisse have placed their names in contention for the presumptive special election to replace the disgraced representative, which Gov. Andrew Cuomo is expected to call for November. In such a special election, a panel of elected party insiders called the county committee picks the candidate—and in the deep-blue district covering parts of central and southern Brooklyn, the Democratic nominee is all but certain to win the seat.

Mr. Pierre served as a member of ex-Mayor Michael Bloomberg’s Community Affairs Unit, and prior to that worked as a staffer for former Congressman Ed Towns and to then-Assemblyman Alan Maisel. Sources told the Observer that he is a 14-year member of the Thomas Jefferson Democratic Club, the organization of Brooklyn Democratic Party boss Frank Seddio.

Mr. Pierre is also the head of the Haitian-American Caucus, a service nonprofit, and is cousins with Brooklyn Assemblywoman Rodneyse Bichotte. He filed to run against Mr. Sampson last year, but ultimately did not pursue the seat.

Ms. Narcisse, a registered nurse and civic leader, may have angered the Kings County County organization by unsuccessfully running against Mr. Maisel—an establishment favorite—for City Council in 2013. Sources tell the Observer she has since tried to make amends with Mr. Seddio, who had been a longtime friend and godfather to her daughter.

Neither Mr. Pierre or Ms. Narcisse responded to requests for comment.

Dell Smitherman, a political director with the powerful 1199 SEIU healthcare workers union, challenged Mr. Sampson unsuccessfully in the Democratic primary last year and told the Observer afterward that he was “committed” to seeking the seat again, even if it meant campaigning on the Working Families Party Line.  Today, however, Mr. Smitherman said he was undecided on whether he would run.

Sources tell the Observer Mr. Seddio is on vacation, but will return tomorrow, and will meet with district leaders—unpaid party representatives who help elect the county committee—whose turfs overlap with the the seat on Wednesday.

The county organization controls the majority of county committee seats in the district, according to insiders, but allies of Assemblyman Charles Barron and his wife, Councilwoman Inez Barron, also hold a substantial number. The Barrons, known for their radical politics and battles with fellow Democrats, did not respond to repeated calls for comment.

Mr. Sampson was convicted of lying to federal agents and witness tampering. 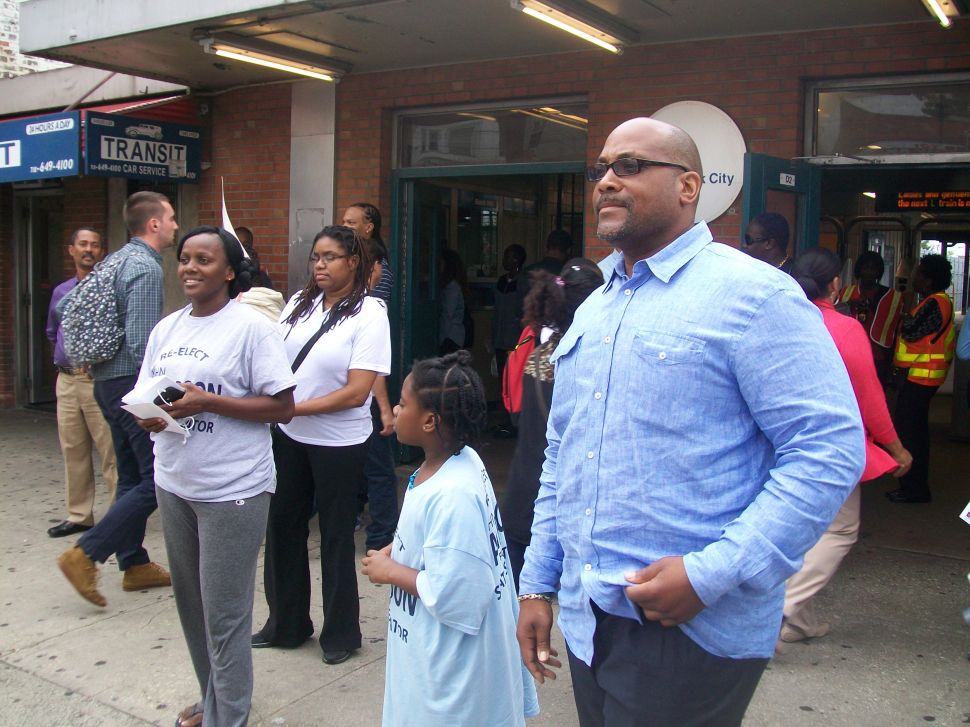