The flourishing summer up at the Williamstown Theatre Festival is moving right along. Mandy Greenfield, the new artistic director, has a keener interest in discovering new and unproven plays than most of this theater’s previous creative forces. Except for Eugene O’Neill’s Moon for the Misbegotten, opening August 8 with Audra McDonald in a role made famous by the late Colleen Dewhurst, the 2015 season is devoted entirely to American world premieres. Fresh on the heels of Willam Inge’s lost, unproduced play Off the Main Road with Kyra Sedgwick and Estelle Parsons, we now have Kinship, with two more superb ladies in leading roles—Cynthia Nixon and Penny Fuller. It’s another blunted attempt to shine some light on the plight of a liberated woman headed for a collision with the parameters of sexual and psychological social mores (a subject with which Ms. Greenfield has an obvious obsession). The play is a trifle, a whiff of smoke that heads for a brick wall, but the acting is of such a high caliber that it’s worth seeing.

The unacceptable social taboo this time is the seduction of a young man by a powerful older woman. The estimable, versatile and extremely watchable Cynthia Nixon, who has won almost every award imaginable, is perfectly cast as a powerful newspaper editor with what looks, to an outsider, like a fulfilled life of accomplishment as wife, mother and career girl. Into her employ comes a brilliant young reporter who has just returned to his hometown after a failed attempt at a writing career in Hollywood. His work catches her attention immediately. She becomes infatuated, first with his talent, then with his sex appeal.

When a news story pops up about protestors outside a power plant, she decides to cover it with her young protégé. They develop what she calls a “kinship”—an overwhelming passion that dominates their lives but halts just short of consummation. But although she never reaches the climax of sexual fulfillment, she becomes so besotted that she collects artifacts of his daily routine—a champagne flute, a Darjeeling cup he sips from, a battered sweater with frayed sleeves inherited from his dead father. Penny Fuller plays the friend she confides in, a retired actress who listens and encourages the extramarital affair, never suspecting the boy who is the sexual object of affection, arousal and deception is her own son. When she recognizes the sweater, every emotion changes. Friendship and understanding turn to fury, resentment and judgmental hypocrisy. After she gives her lust and trust over to the boy unconditionally, he feels smothered and leaves her, abandoned and devastated. Three lives will never be the same.

It’s a tale well rehearsed in today’s tabloids about older teachers who seduce their young students of both genders. The director is Jo Bonney. The playwright is Carey Perloff, who has run the American Conservatory Theater in San Francisco since 1992. She brings out insights in both women, but the writing is dry to the point of dehydration. Cynthia Nixon is chilling as a brilliant, tough and conflicted woman who, rejected in her need for sex, loses her sophisticated sense of reason and retaliates from her pain with a revenge that hurts others. Penny Fuller is marvelous as a woman whose perfect facade conceals a sinful past of her own, turning on a dime from shocked mother hen to viperish and unforgiving carrion bird.

The wedge between their duplicity is Chris Lowell, a real trooper with a considerable power to draw attention and hold his own as part of a dynamic stage threesome, as well as play a character with a power that is imperceptible even to himself. He does more than seems possible with a role that is plagued by dialogue so feverish it’s almost unspeakable. On the verge of a bedroom tryst, he says to the woman old enough to be his mother: “You’re my addiction, my daylight, I explode just looking at you. I want to devour you. I want to drink you up. I want to shoot you into my bloodstream.” Ms. Nixon looks stricken. I don’t blame her. I couldn’t say a line a line like that with a straight face. Could you? 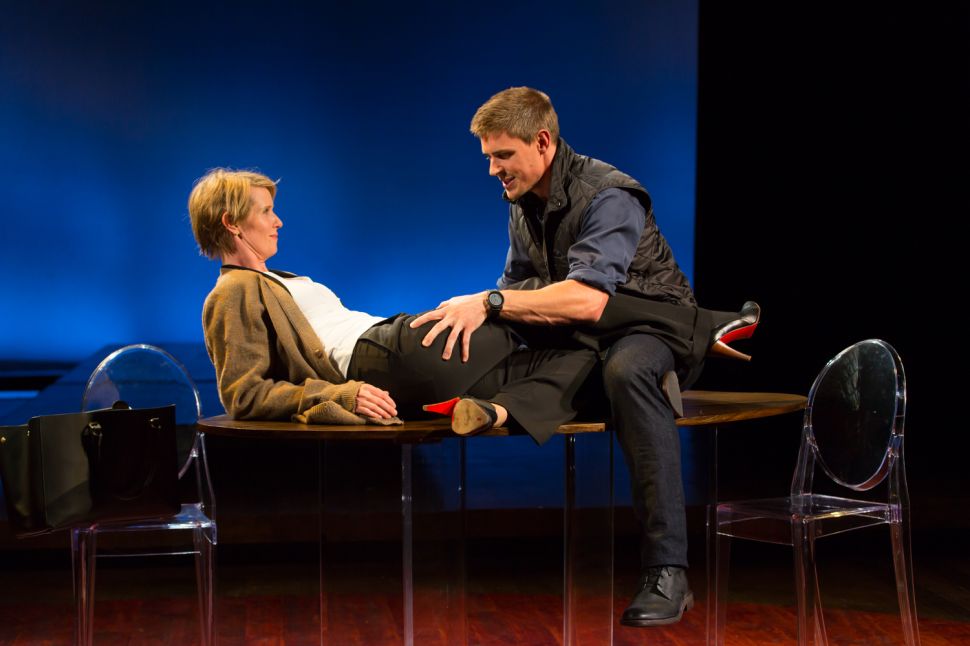