Just before my first guided Meditation, I sit in the back of an un-air conditioned taxi crawling through traffic on East 46th Street. Flop sweat drips and my heart rate speeds up. I am agitated, as we pause behind not one, but two garbage trucks. I don’t want to be late. Breathe.

Master of mindfulness Deepak Chopra will lead the crash course, which is akin to taking your first guitar lesson with Eric Clapton.

Mr. Chopra headlines today’s session of the Nexus Global Youth Summit, a four-day annual conference at the United Nations that attracts many scions of wealthy families and philanthropic professionals who want to help them spend their money wisely.  This year’s agenda focuses on topics including impact investing, human trafficking and documentary storytelling, along with plenty of donor schmoozing and boozy parties.

In a deep, reassuring voice—Mr. Chopra sounds like an Indian Henry Kissinger—he directs his students to plant our feet on the floor, straighten our posture and shut our eyes.

Outside the U.N., I meet Meaghan Kennedy Townsend, the granddaughter of Robert Kennedy. A stunning, leggy woman in a pristine navy linen dress and tan leather high heels, I ask Ms. Kennedy Townsend, who teaches yoga and plans to launch an altruistic activewear line, for a few meditation tips. She describes meditation as a mind stroll and advises me to allow emerging thoughts “walk alongside you.” She steps toward me, places her hands above my ribs, then guides my hands to the sides of her flat stomach. Breathe indeed.

After passing through tight security, attendees eventually settle into a high-ceilinged U.N. conference room dominated by long crescent-shaped desks sprouting flexible black microphones. Soon after guests sit in cushy black leather chairs, an alarm wails, Wooooooooo, Wooooooooo, Wooooooo. A white strobe light flashes. “That’s not good. Oh dear,” says the fellow next to me, Doug Balfour, a philanthropy consultant and author of Doing Good Great: An Insider’s Guide to Getting the Most out of Your Philanthropic Journey.

The group meditation, the boat rides, the gourmet Indian lunches, the inspiring stories from colleagues, serve as preventative medicine.

Focusing on the moment rather than my notepad proves challenging. But I recall Ms. Kennedy Townsend’s advice and take a walk with my thoughts, which include: is it right for foundations to underwrite a big splashy conference rather than, say, bettering grim Syrian refugee camps? After what feels like a cross between a short nap and a long daydream, my neighbor, Mr. Balfour, a former aid worker, details one benefit of such confabs. Many social entrepreneurs and advocates he encounters—“Type A people,” he notes—continually push themselves and then suddenly collapse; “Sinkhole Syndrome,” he calls it. The group meditation, the boat rides, the gourmet Indian lunches, the inspiring stories from colleagues, serve as preventative medicine.

His explanation resonates during Mr. Chopra’s informative, yet sometimes troubling, post-meditation talk. A neuroendocrinologist by training, Mr. Chopra explains how our dominant “reptilian brain” is responsible for the fight-or-flight response. Basically, fight-or-flight helps us survive a house fire but proves more destructive when humans can create a nuclear arsenal with more evolutionary advanced parts of the brain. “When you combine primitive behaviors with modern capacities,” he says soberly, “that spells extinction. Nature might be saying, the universe might be saying, the human species was an interesting experiment but we don’t work.”

And that thought merits meditation. 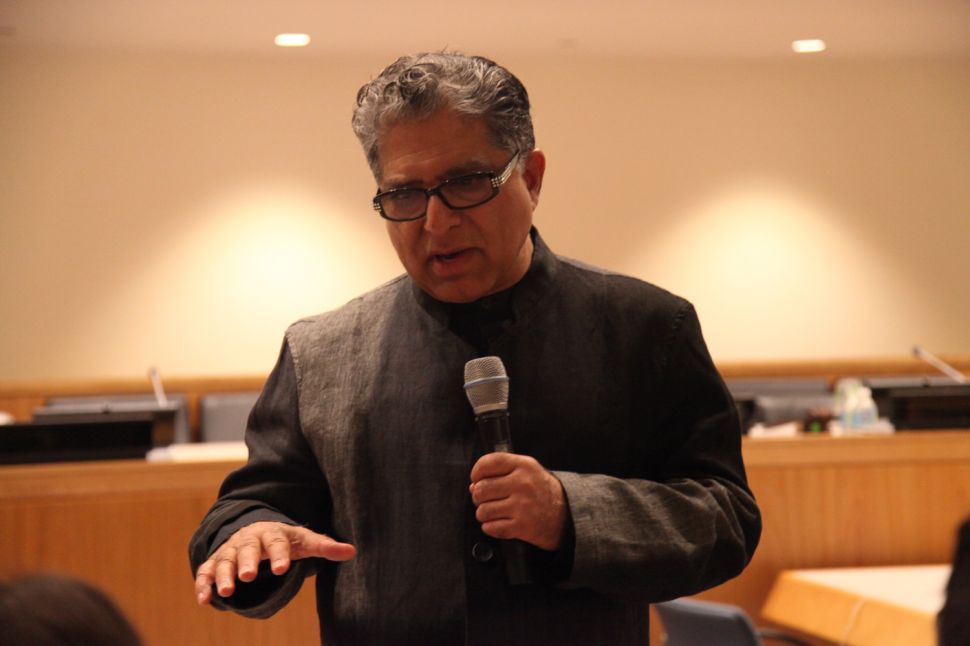