Keeping in line with an upcoming July 4 weekend — as well as their targeting of the freshman Republican ahead of a likely 2016 challenge — the Democratic Congressional Campaign Committee launched another round of digital ads today calling on U.S. Rep. Tom MacArthur (R-3) to “Declare his Independence” from his record as a former insurance executive

It’s the third time organization has gone after the freshman congressman since his win over Burlington County Freeholder Aimee Belgard in the district last November. In April, the DCCC accused the Republican of contributing to his party’s “utter failure in governing effectively,” and in May, the group tried to tie a procedural vote he cast in Congress to that month’s deadly Amtrak crash.

But it’s MacArthur’s background as CEO of York Risk Services, an insurance services firm, in particular that has served as the main target of attack for the group.

“We know that Congressman MacArthur shortchanged his own employees for years, and New Jersey voters are quickly finding out that MacArthur is shortchanging them in Washington,” said Jeb Fain, representing the DCCC. “New Jersey voters deserve far better than a politician who thinks the rules just don’t apply to him.”

Earlier this year, a California judge ordered York Services to pay more than $8 million in back overtime and interest to 122 employees who sued the company. (It’s important to note, however, that the firm has since appealed the decision. MacArthur left the firm in 2010).

The DCCC’s ad campaigns are an early indication that national Democrats have their sights again set early on CD3, a swing district with a history of supporting both parties in congressional elections.

“The DCCC repeatedly lied and had multiple ads taken off the air last year while throwing the kitchen sink at Tom – and then got crushed on Election Day,” countered MacArthur campaign strategist Chris Russell. “They’ve picked up right where they left off this year by outrageously suggesting Tom was responsible for the Amtrak tragedy and then attacking him for votes he never even took.  While they continue the tawdry attacks, Congressman MacArthur will continue working across party lines to protect Joint Base McGuire-Dix-Lakehurst and help victims of Sandy get back in their homes and on their feet.” 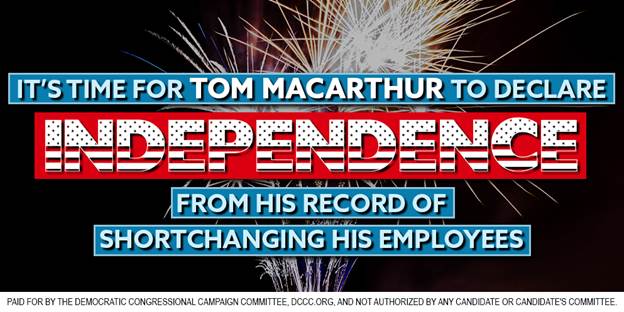