The amount of money New York City is collecting in fines from small business owners has been cut in half, with violations issued cut by a third, Mayor Bill de Blasio announced today.

Mr. de Blasio’s administration touted the reduced revenue as a fulfilled campaign promise to reduce fines and fees on small business owners—who had complained about aggressive enforcement under former Mayor Michael Bloomberg that they argued made it hard to stay in business. Outer-borough business owners in particular argued they had been singled out and fined for minor violations that did not impact health or safety.

“A thriving city of diverse neighborhoods depends on small businesses to create jobs, serve their communities, and enrich the City economy. Small businesses need support and resources—not onerous fines for violations that don’t pose any risk to consumers,” Mr. de Blasio said in a statement. “Reducing these fines is a bedrock of our effort to make it easier to open and operate a small business in New York City, and I’m proud to see our fair reforms translate in the numbers.”

In fiscal year 2015, which ended June 30, the city collected $15.7 million in fines from small businesses; that’s about half of the $32.5 million collected in fiscal year 2014. The number of violations issued to businesses by the Department of Consumer Affairs dropped by a more than one-third, from 19,409 to 11,923.

“The reforms we implemented have translated into more than $5 million going directly back into the pockets of small business owners allowing them to reinvest their hard-earned money,” DCA Commissioner Julie Menin said.

The administration said it was able to reduce the fines and violation by increasing education for business owners, including offering services in foreign languages, simplifying city rules, and by issuing warnings for violations that do not harm consumers. The department also has begun giving business owners a chance to fix a violation before being fined—handing out 3,632 “curable violations” in 2014, which allows businesses to correct a first-time mistake for the signage violations that had drawn the ire of many business owners.

In a press release, the mayor included plaudits from a slew of lawmakers and business groups, from Borough President Eric Adams to Partnership for New York City President Kathryn Wylde.

“Employers are far more likely to invest in business growth and job creation when city government shows that it is working to reduce unnecessary costs and create a more hospitable business climate,” Ms. Wylde said.

Some of the most vocal complaints about fines had come from Staten Island, and Republican Borough President James Oddo struck a note of cautious optimism.

“I am encouraged that the Mayor is making efforts to improve the business climate for our struggling small business owners,” Mr. Oddo said in a statement to the Observer. “There remains a lot of work to do to make us a truly business friendly city.” 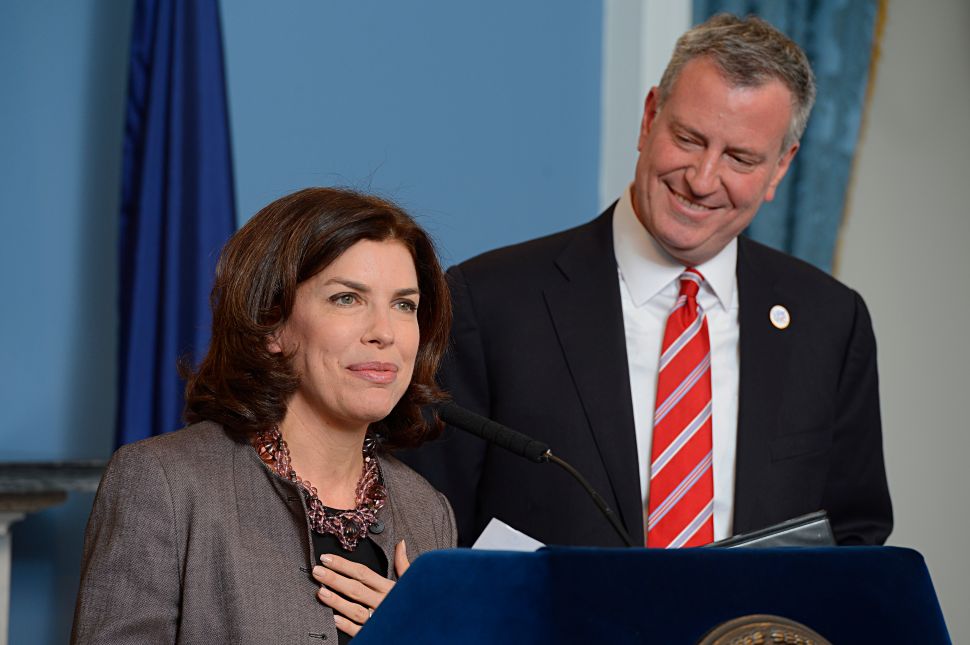