Before Barrett Design put ten state of the art condos on the market at 4 Downing Street in the Clinton Hill neighborhood of Brooklyn, there was Broken Angel House. A beloved legend of New York’s urban-artistic bend, the building was perhaps best known for its role in Dave Chappelle’s Block Party, used as the backdrop for the film in 2006.

Arthur Wood, who with his wife bought the former Brooklyn Trolley Building in 1979 for $2000, built a unique, towering structure that rose 109 feet above the street, continuously working on the building over the thirty odd years he and his family resided there. But when the structure caught fire in 2006, the Department of Buildings threatened to raze the building if Mr. Wood could not get it up to code, and he soon entered into a partnership with local developer Shahn Andersen to build condos in the spirit of Broken Angel. Perhaps unsurprisingly, this later fizzled and when the building’s loan was called in and foreclosed Mr. Wood was evicted in 2013. Back in May the New York Times reported on the site’s impending transformation into condos.

Now Broken Angel is set to feature in a documentary made by Michael Galinsky, a Clinton Hill resident for sixteen years and an independent filmmaker convinced that the former Broken Angel site serves as the epitome of gentrification at the cost of character.

What attracted you to this project?

I had seen the building for many years since I moved to Clinton Hill in 1999 and it just blew my mind. I’d seen Arthur around but I never had the chance to speak with him. My neighbor was a friend of his so I kept saying, “Can you introduce me to him? Because I really want to figure out a way to make a film about it.” I’ve been saying that for years.

Then when it caught on fire, I knew I had to do it. I had already been working on Battle for Brooklyn for years, so it was a way to do something that was going to have a much more clear and positive outcome than Battle for Brooklyn. It seemed like when they were going to try and save the building, they were going to do it in a way that would respect the building and respect Arthur’s work. So it seemed like, “Oh, ok, this will be a hedge against the negativity of my other movie.”

How has the culture of Clinton Hill changed since you moved there 16 years ago?

It’s changed significantly I think. When we moved in, beyond diners, there weren’t many restaurants in Clinton Hill. It gentrified very rapidly at a certain point. I did not get to tour the finished apartments, but I’d like to do some of that to end the movie.

You mean the Barrett Design apartments?

Exactly. The sad thing is, Arthur never got to see any of that money because it was foreclosed and he lost everything.

Arthur once said, “that the whole point of the structure is to teach people that the difference between good and evil is a very subtle change.” Did BAH accomplish that?

I think it definitely taught people about the power of wild, creative energy. I think very few people could walk by that building and not be knocked out of their daily slumber. You just see it and it was really, pretty amazing. That’s one of the reasons I wanted to make the film. I didn’t think it was going to end badly, I thought he would win. Arthur is very good at lawsuits.

To quote Arthur again, “Broken Angel is a lifestyle.” Do you embody it?

No I don’t, I couldn’t! I couldn’t live in a freezing building in the winter! I think of myself as an artist, for sure, but not to the heights of Arthur Wood. Arthur Wood is a national treasure. The building itself was so amazing and so important. It was Brooklyn’s Watts Tower. In terms of art, I guess I’m more interested in making art than commerce; so in that way I would say yes, I feel that I do embody the spirit of the Broken Angel, but not to the degree that Arthur does.

Do you think the city is pushing artists out?

Well, yes. It’s a side effect of the kind of growth and tax-based policy. Having lived in the city since 1987, when I arrived for college, I’ve seen this slow change over a long period of time. When Bloomberg came in, it just started galloping forward. There were benefits to some degree, when things started to get a bit safer and there was more order but then it passes a certain point and it’s really hard and difficult to think about being an artist in the city anymore; or being a young person and hoping to find your way without some external means of support. It’s really hard. 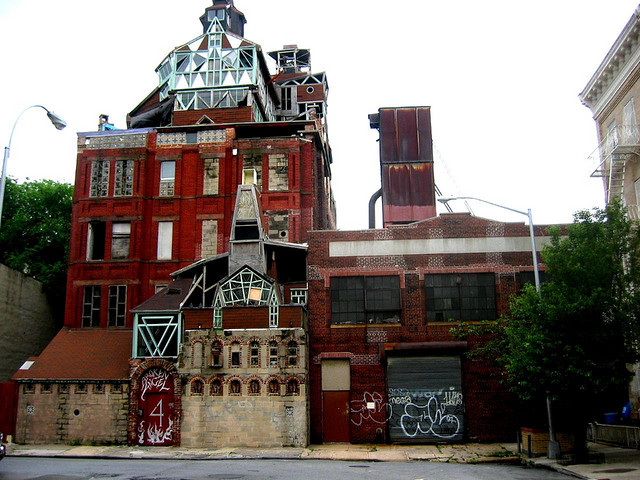