An opera in French, written by an Italian composer, sung by an international cast before an audience of Westchester music lovers: that’s about as cosmopolitan a summer evening as one can conceive. And when the opera in question is Donizetti’s sumptuous La Favorite, performed last Saturday to the reliably high standards of Bel Canto at Caramoor, it’s hard to imagine a more pleasant way to while away a balmy summer evening.

The international flavor of this 1840 work is in part due to the curious cultural exodus of Italian composers of the time from their native theaters in Milan, Naples and Rome to the Académie Royale de Musique, or, as we call it today, the Paris Opera.

With the restoration of the French monarchy in the early part of the 19th century, Paris became the de facto capital of Europe, with enough discretionary wealth to produce opera to a level of brilliance undreamed of anywhere else in the world. Among the first to seek fame and fortune in Paris was the doyen of opera seria, Gioachino Rossini, who essentially invented the genre of grand opera with his 1829 epic Guillaume Tell.

This work can be understood as a template for French opera of the succeeding decades, including La Favorite: lengthy, serious in tone, orchestrated for virtuoso players, and, not least, dealing with subject matter and themes conservative Italian censors would never allow on stage.

Now, Favorite is not nearly so ambitious a work as Tell, but it still is something of a stretch for Donizetti, a veteran of the fast-paced but dramatically shallow milieu of Bel Canto. In this work, the composer demonstrates a mastery of longer, subtler musical forms, climaxing in a final act of radiantly chaste beauty.

The story of the opera turns on two themes mostly taboo in Italian theaters of the time: sex and religion. The “favorite” in the title is the historical character Léonor de Guzman, mistress of Alphonse XI, king of Castille. Their real-life affair was rather sedate, so librettists Alphonse Royer and Gustave Vaëz invented a back street lover for Léonor, Fernand, and a monk who has not yet taken his final vows.

At first Léonor resists Fernand, encouraging him to seek glory as a leader in Castille’s war against the Moors. When he returns as a hero, the King grants him Léonor’s hand in marriage, which he accepts, ignorant of the lady’s past. When he discovers that he has taken on the King’s leftovers, Fernand retreats to the monastery, where Léonor follows him, only to die in his arms moments after he takes his vows.

It’s a sign of Donizetti’s genius that he can elevate the dramatically absurd final scene—Léonor isn’t ill, she hasn’t taken poison, she’s just succumbing to plot necessity—with two of the most gorgeous moments of the score, the shimmering tenor aria “Ange si pur” for the heartbroken Fernand and a richly melodic “farewell” duet for the star-crossed lovers. The composer also dares to end the opera not with the traditional chorus, but with a declamatory solo line for Fernand, a device looking forward to some of Verdi’s finest curtain moments a decade later.

The part of Léonor was created for the contralto Rosine Stoltz, who ironically was the mistress of the director of the Paris Opera.  It provides a rare prima donna role for a star mezzo-soprano. Caramoor’s leading lady, Clémentine Margaine, boasted a big, vibrant voice with sinfully dark low tones, but her performance felt stodgy. The great lyric aria “O mon Fernand” sounded uneasy, with the vocal registers diverging instead of blending. The following cabaletta “Mon châtiment descend du ciel,” a blisteringly fiery piece, felt tentative, with the singer hesitating  when the music wanted to plunge forward.

Fortunately, the men in the performance were uniformly excellent. Argentinian tenor Santiago Ballerini spun out an unconventionally “narrow” voice into seemingly endless phrases, just right for the dreamy character of Fernand. He also wielded high notes in pianissimo and fortissimo and all dynamics in between, singing the ones Donizetti actually wrote so well one forgave him for adding more of his own devising.

Caramoor stalwart Daniel Mobbs finessed his light bass-baritone expertly in rolling out the thundering phrases of Fernand’s spiritual mentor Balthazar, but best of all was baritone Stephen Powell as the King. This artist is blessed with the combination of absolute technical security and a questing musical intelligence, so that his performance in the great aria “Léonor! Viens” expressed urgency from a place of confident repose. When a king sings, this is what he should sound like.

I would quibble with one or two of conductor Will Crutchfield’s musical choices: some of the ornamentation sounded a little flashy. But he understands the architecture of this music, how one number builds into the next, and he expresses that wisdom through sensitive leadership of the Orchestra of St. Luke’s.

The night before offered an opportunity to hear another of Donizetti’s French operas, La Fille du Régiment, at the Kaye Playhouse at Hunter College. This was one of the “end of term” presentations of the Martina Arroyo Prelude to Performance program designed to ease singers  in  the transition from student to professional.

Of the singers involved in this light comedy about an orphan girl adopted by a regiment of French soldiers, not everyone seemed quite poised for a career, but even the vocally uncertain artists were musically and dramatically well-prepared. Though the juvenile leads in this comedy need a touch more polish, two of the character performers sounded eminently ready for prime time.

As the busybody aunt of the orphan, Karolina Pilou revealed a booming contralto and a larger-than-life campy sense of the absurd. She has the natural comedian’s gift of being able to take a gag almost over the top without ever wearing out her welcome with the audience. This is a major personality who will go far. Matching her shtick for shtick was bass-baritone Jacopo Buora as the irascible Sergeant Sulpice. His voice is not large, but every 16th note and every syllable of patter lands precisely. What’s more, he (like Ms. Pilou) boasted suave French diction both in song and in spoken dialogue.

I’ve enjoyed these Prelude to Performance shows for several summers now, but this Fille, it seems, caught the group a little below its usual high standards. Conductor Imre Palló’s tempos dragged, and the staging by Laura Alley was unimaginatively cutesy. Even a cameo appearance by legendary 91-year-old soprano Lucine Amara as a snobbish countess felt like a missed opportunity: if you blinked, you would have missed her. 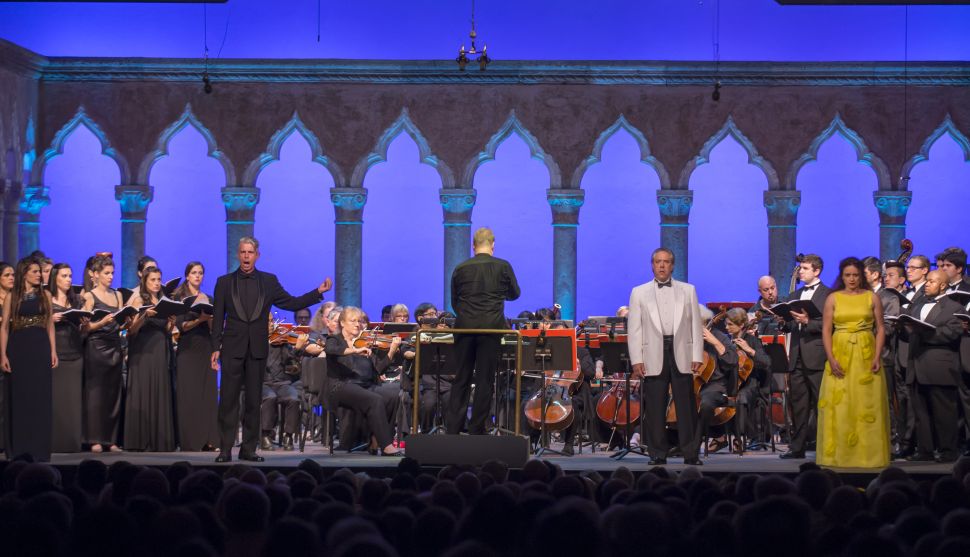