“He, of all people, knew better,” Judge Pamela Chen said when handing down the sentence to Mr. Grimm, a U.S. Marine and former FBI special agent who investigated white-collar crime.

Mr. Grimm, whose attorneys had asked Judge Chen for a sentence with no jail time and only probation, pleaded guilty in December to paying workers off-the-books and cheating the federal, state and local governments out of tax dollars while running a restaurant called Healthalicious. He stepped down in January.

He left court today without speaking to reporters, and will have to surrender to federal custody in September.

Mr. Grimm says he sold his share in the restaurant before running for Congress, though exactly when Mr. Grimm stepped away from the business was in dispute today during a sentencing hearing before Judge Chen that went on for more than two hours.

He said he took responsibility for his crimes, even as his attorneys sought to show the system of paying workers off-the-books, and thus not meeting minimum wage requirements or paying taxes, was in place before his time at the restaurant.

The former congressman argued he had not cheated on his taxes out of greed. He said a restaurant in Manhattan with delivery boys simply cannot stay open without paying them in cash.

“The truth is, I should’ve closed,” Mr. Grimm said. “I accept full responsibility for not have the bravery you would expect me to have to fail.”

But Ms. Chen was not buying that argument, saying it was not acceptable to break the law and cheat the government and the public because he feared failing.

“Quite frankly, what it tells me is your moral compass, Mr. Grimm, needs re-orientation,” Ms. Chen said.

In asking for a non-custodial sentence, Mr. Grimm’s attorneys argued no other restauranteurs in Manhattan had been given jail time for the same crime. In his own statement, his voice emotional, Mr. Grimm said that was a “tough pill for me to swallow.”

“Just treat me like every other restaurant owner,” he said, saying he didn’t seek leniency for his military or government service. “Please consider, your honor, the good works I can still do.”

Mr. Grimm also argued he had been punished already—saying he lost his job, his pension, would lose his law license, and would be a felon. He said he was so sorry for his crimes that he’d stepped down from his job because it was the “right thing” to do—but did not mention the fact that, immediately after pleading guilty, he refused to resign, and only did so after days of pressure. In a room packed full of reporters eager to cover his sentencing, Mr. Grimm—who once threatened to throw a reporter off a balcony and break him “like a boy“—and his attorneys also argued he’d been shamed by the media.

But Judge Chen said those things were not punishments for his crime but “collateral consequences” for his actions.

And while others do not often get jail time for the crime, Judge Chen said she believed the crime was not an “insignificant or trivial” one. If anything, she went on, perhaps the commonality of the crime is a good reason to be punished with prison—to deter others from doing it.

After rebutting Mr. Grimm’s arguments one by one—with the exception of agreeing his military service did earn him some leniency—Judge Chen went on to read a scathing letter from a constituent who noted Mr. Grimm had run for re-election while under indictment, even though he knew he was guilty, only to leave Staten Island voters with no representation for months and the expense of a special election after he eventually stepped down. (Mr. Grimm was eventually replaced in that special election by a fellow Republican, and the borough’s former district attorney, Congressman Daniel Donovan.)

Mr. Grimm had long proclaimed his innocence, deeming the prosecution a political witch hunt, before changing his tune and admitting his guilt after crushing his Democratic opponent in his 2014 re-election bid. While Mr. Grimm has since told the court he takes responsibility, his supporters continue to cite politics as the reason the former congressman is heading to prison.

“I don’t think he should’ve gotten any time at all, for all the service and what’s he done,” Staten Island Republican Party Chairman John Antoniello said outside the courthouse. When the Observer asked why he thought Mr. Grimm did get prison time, Mr. Antoniello said, “Political, for the most part. They had to give him something. They couldn’t spend all this time and money and not come away with something.”

Whether Mr. Grimm was the ringleader of the tax scheme was a matter of debate during the hearing—the government had sought to tack on a sentencing enhancement alleging that Mr. Grimm had recruited or led others in the scheme.

As he argued that he wasn’t in charge, Mr. Grimm also hastened to tell the judge he accepted responsibility—something that knocks time off of a sentence.

“I did it. I was wrong. I was absolutely wrong to pay them off the books,” Mr. Grimm said at one point, as he tried to explain that he worked alongside another employee of the restaurant, Manuel Perez, as an equal. “I was trained by Manuel. I didn’t supervise him.”

Much of the hearing was spent trying to clarify the work structure at the restaurant, and the roles of Mr. Grimm, Mr. Perez, and Mr. Grimm’s business partner, Bennett Ofarly. Also at issue was just when Mr. Grimm stopped working with the restaurant or sold his share; Mr. Grimm maintains that was in April 2009, but the paperwork wasn’t signed by Mr. Ofarly until December 2009, much closer to the start of Mr. Grimm’s campaign. Mr. Grimm said he sold his interest to Mr. Ofarly in April—”we shook hands”—but because Mr. Ofarly was busy “and is an interesting character, let’s just say,” he didn’t sign the paperwork for months.

But in January 2010, Mr. Grimm emailed Mr. Perez, offering him 10 percent of a share in the restaurant—which the government argued showed he was recruiting others to the scheme, and which Judge Chen pointed out made it seem he was still involved with the business. Mr. Grimm argued he sent the email on behalf of Mr. Ofarly, and that he had no share in the restaurant to offer.

In addition to eight months of incarceration, Mr. Grimm was sentenced to one year of supervised release, ordered not to have firearms, and to complete 200 hours of community service upon his release. He will also be ordered to make restitution. 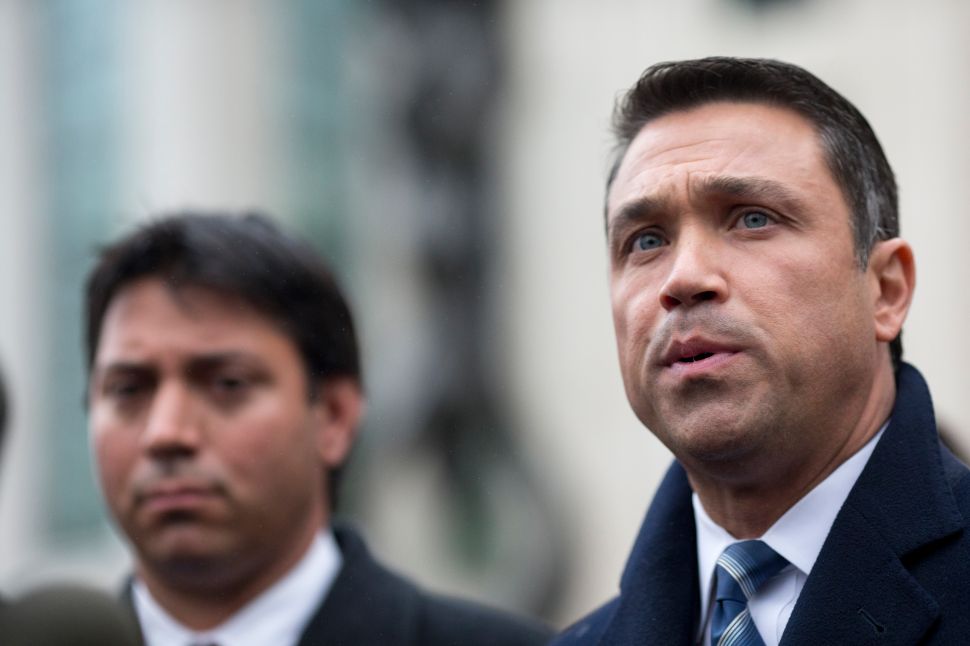