I made an interesting discovery last night. HGTV offers most of their television shows online, and seeing that I am wildly sunburnt and interested in finding a matching duvet for my red–tinted skin, I decided to dive into the world of refurbished wood and accent colors.

Friends, readers, New Yorkers, don’t watch HGTV. Don’t do it. Why, you might ask? I’ll tell you why. Nay, I’ll show you why, using one particular episode of Fixer Upper.

The show follows a couple—contractor Chip and designer Joanna—who help their fellow Waco, Texas residents buy and redo homes. This particular episode, entitled “High School Friend Seeks Fixer,” (which sounds oddly like a Single White Female ad, but I digress), follows a couple through the purchase of a run–down home and its redecoration.

This brings me to the first reason you shouldn’t watch HGTV. The couple bought their home for $149,000. An entire house, with a roof and walls and everything, for $149,000. Please, show me where an entire house (including a tire swing!) can be purchased for that sum. Try just finding a parking space for that little money. Seriously, I’ll wait. Oh, you can’t, and you just got a $150,000 ticket for blocking an intersection while looking for said parking spot. Great job.

It’s just so sickeningly, charmingly quaint. Joanna and Chip go shopping for furniture in a town where the population is 90. 90 individuals. Don’t you dare tell me Brooklyn is just as quaint, because it is not.

I implore you, do not watch happy Texan couples buy mansions that cost roughly the same amount as your rent for one month. Rent, might I add, that barely covers a single room that is covered with dust and spider webs and the tears of past and current residents.

And if you insist on watching Fixer Upper, do not watch it alone. “Why’s that?” you might wonder. It’ll make you feel lonely, that’s why. Where’s your design partner, huh? Maybe if you didn’t fight so much with your ex about curtains you wouldn’t be single. HGTV strikes again.

It’s more than that though. You can’t hate–watch HGTV. It’s impossible. This channel will destroy the cynic in you. You cannot watch a grinning family of four—all of whom are riding in on their ponies because this is Waco, Texas—trot through the brand new freshly varnished horse entrance of the house without sobbing. Don’t even pretend to hate–watch this. You will fail.

Also, the drama is almost unbearable. Like the time there was a single spot of damage and Chip immediately assumed fetal position.

Or when handyman Clint was so clearly in love with Joanna, and it was almost hard to watch. This one time I swear he went in for a high five and she didn’t even see it. He also hauls around large pieces of wood and other bulky items to impress her. That’s the wooing process in Waco, I guess. I for one would like to see Chip hop on his excavator and fight Clint. 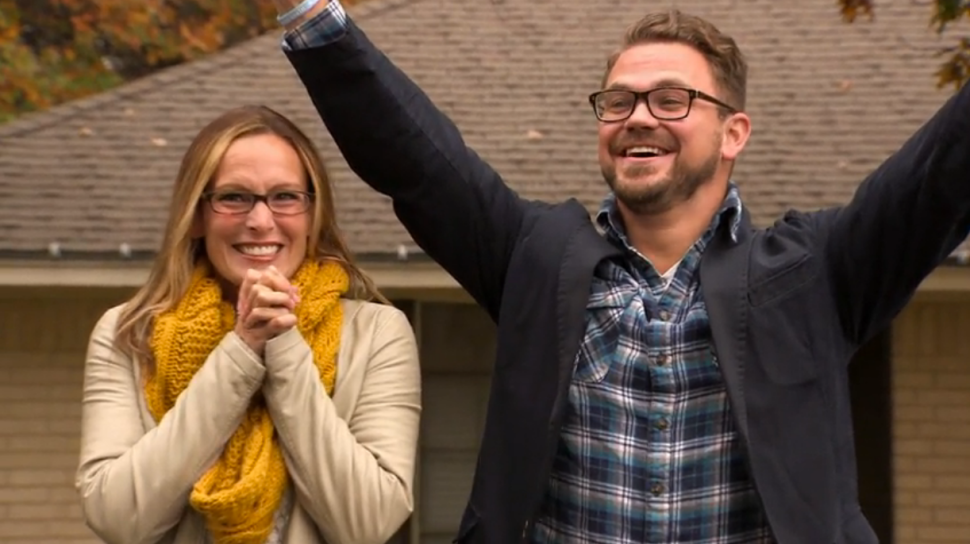