Twenty years ago, when Jacqueline Schneider, a luxury goods and jewelry consultant, moved back to New York from Dallas, Texas, the apartment tower at 167 East 61st Street seemed to her a beacon of privilege and prestige. The co-op boasted a broad stone courtyard planted with greenery and was set back from the curb at a gracious remove. Its lobby was sleek, mirrored and bright, with double-height ceilings, walls of windows and spiffy doormen standing post. Constructed in 1983, the building was scarcely more than 10 years old, a flashy new kid on the block with a name to match: Trump Plaza.

Much enamored, Ms. Schneider bought a small stake in the building—a 1,000-square-foot one-bedroom on the 20th floor, with a wraparound balcony off the living room, and over the years, she has loved to stand outside and watch the sky change colors at dusk. When the city lights come on, she said not long ago, “You begin to sparkle.”

But until recently, Trump Plaza had some features that were less advantageous, and when Ms. Schneider decided to sell her home, she found that she had some slightly esoteric matters to explain to potential buyers.

‘I felt that buyers could align themselves with a seller who tells her story, and who gives the reasons behind it.’—broker Reba Miller.

The trouble was that until a few months ago, the occupants of 167 East 61st Street did not own the land beneath their foundations, and as such, apartments there had long traded for less than units in what might otherwise have been considered comparable buildings. That the co-op leased the land also meant elevated monthly charges, which amounted for owners to something akin to docking fees. But last November, the co-op board endeavored to rectify the situation, paying roughly $185 million for the parcel, and divvying up the cost among owners.

Ms. Schneider’s share reached well into six-figure territory, and she hopes to recoup the investment in selling her place, which she recently put on the market for $1.745 million. At one time, that figure would have been naïvely optimistic, but prices in the building have jumped. A one-bedroom on a lower floor, assessed at $750,000 some months back, just sold for around $1.5 million, and Ms. Schneider’s maintenance costs have fallen by 18 percent. Still, she felt that a creative approach was called for, and enlisted the services of Reba Miller, and her eponymous firm, to that end.

In a marked departure from Residential Brokerage 101, Ms. Miller sought, in the case of Ms. Schneider’s co-op, to dissolve the barriers between buyer and seller that agents usually strive to preserve. “I wanted to allow brokers and other people in the industry and buyers to hear the story of this building, and of this particular woman,” Ms. Miller said. “I felt that buyers could align themselves with a seller who tells her story, and who gives the reasons behind it.”

In the name of transparency, Ms. Miller commissioned a short video production in which she plays Barbara Walters to Ms. Schneider’s newsmaker. Responding to Ms. Miller’s questions as jazz tinkles in the background, Ms. Schneider, a blue-eyed, practical-seeming woman of upper middle age, outlines the neighborhood’s benefits—Bloomingdale’s, Barneys, proximity to musea—and runs through the nitty gritty of the land transaction with evident fluency. Rather than as an anonymous seller, shielded by an agent peddling what might otherwise seem to be overpriced merchandise, Ms. Schneider emerges as a straight shooter with a viable, well-loved product that simply requires a little explanation.

While it’s true that any broker worth her salt will tell you that residential real estate revolves above all around interpersonal dynamics, for many in the business, the notion of uniting buyer and seller directly would be sheer anathema. Successful transactions, as it turns out, actually tend to depend more on keeping people apart than on bringing them together.

“Quite often, [buying a home] is among the most emotionally significant transactions a person will make in their life,” said Town Residential president of sales Wendy Maitland. “It’s a decision that’s deeply associated with the identities of the people involved,” and one consequently apt to produce behavior that is not altogether rational.</p

‘You never want to let it get to a point where [buyer and seller] are discussing money. that would be very, very bad—like a defendant and a plaintiff discussing the case. Any attempt to renegotiate a contract could see a deal blow up.’—Douglas Elliman broker Tom Postilio.

“There’s often tension on both ends,” concurred Tom Postilio, a broker with Douglas Elliman. “So basically, you’re fusing them together into a potentially explosive situation. You have to determine ahead of time whether they’re going to play nicely in the sandbox together.”

Nonetheless, the Hail Mary has its place in every playbook. And among the choreographies of 11th-hour stratagems, those that bring together buyers and sellers of real estate are among the most delicately orchestrated. Mr. Postilio and Mr. Conlon described to the Observer a negotiation currently under way for a three-bedroom duplex on East 19th Street priced at $2.595 million, in which they represent the seller. The apartment occupies the top two floors of a brownstone that was turned some years ago into a co-op comprised of only a handful of units, and residents there have elected to forgo the formal financial and managerial arrangements standard in larger, more traditional buildings—a decision that has given pause to the leading candidate for the duplex.

“There’s been a long journey of questions and suspicions,” Mr. Conlon said. “The buyer thinks that everything is a big deal—that everything is suspicious.” But as the Elliman brokers acknowledged, his concerns are understandable. He has wondered, for example, about why the building does not have audited financials, about why his requests for information have not been more swiftly answered and about why the co-op’s operating budget is not more substantial. “We’ve been trying to explain it to him as like a family living in a townhouse together,” Mr. Conlon continued. “It’s not a big place run like clockwork machinery. But there’s no deficit. No one is trying to hide anything.”

Sensing that relays between brokers were not advancing proceedings, Messrs. Postilio and Conlon arranged a conference call between the parties. “[The seller] has lived there for eight years, and he’s been very happy there,” Mr. Postilio said of his client, who is relocating to Vermont. “He’s very mild-mannered and rational and articulate, and he can probably do more to defuse the tension at this point than we can.” But on the eve of the call, a property inspection report arrived, and Mr. Postilio and Mr. Conlon cancelled the tête-à-tête pending review of the details, lest the conversation list toward treacherous territory.

“When you bring in an inspector, in other markets, it’s often a springboard to start renegotiating pricing,” said Mr. Postilio. That’s not true in New York, at least not at the moment, mostly due to high demand. Still, “You never want to let it get to a point where [buyer and seller] are discussing money. That would be very, very bad—like a defendant and a plaintiff hanging around outside the courtroom discussing the case. Any attempt to renegotiate a contract could see a deal blow up.”

Several others in the industry echoed that lawyerly analogy, and to be sure, it is one that flatters the broker’s role, but that doesn’t mean it’s without merit. Jana Angelakis, a Citi Habitats broker, recently shepherded into contract a co-op in Gramercy belonging to friends who are, as it happens, also moving to Vermont. The buyers, friends, too, of Ms. Angelakis’, had been renting the apartment for three years, and grew close over that period with their landlords, eventually approaching them directly about the possibility of making their stay permanent. But when the time came to discuss the deal’s parameters, Ms. Angelakis was summoned once more to act as a buffer, not least in the interest of protecting the friendship.

To lose a friendship in pursuit of a home, of course, is less than ideal. But a more common problem arises when house hunters lose homes as they flee from sellers with whom they don’t wish to make friends in the first place. Ms. Maitland, of Town, recalled representing a seller in what she described as an “uber-luxury” Soho building, who felt so deeply attached to his apartment that he insisted on attending second and third showings. His behavior often seemed designed to repel his visitors. “He would tell them that he really didn’t need to sell,” Ms. Maitland said. “He would tell them that his watch cost more than the apartment. People would run from those showings.” She ultimately sold the place to a foreign buyer, who, to the relief of all concerned, was unavailable to meet Ms. Maitland’s client in person.

But buyers, even those with garish tastes, can be put off by reserve as much as outright rudeness. One broker told the Observer of assembling a deal some 18 months ago at One57, the soaring, glass-plated tower on West 57th Street, whose $100.4 million duplex penthouse holds the record for the highest price ever paid for a single residence in New York. Her client, also a foreigner, had negotiated a contract for a full floor of the building, an arrangement that would enable him to combine three separate units, with construction and design plans subject to the approval of the developer, Extell Development.

“The buyer was ready to sign the contract,” the broker recalled. “And he said, ‘We’ll have the signing as soon as we have a sit-down, face-to-face meeting with the developer,’ ” meaning Gary Barnett, Extell’s president. “He said, ‘This is a guy I’m going to be working with. It’s a big renovation. It’s not a fast renovation. I want to shake hands with him and look him in the
eye.’ ” But even after multiple requests, the broker said, Mr. Barnett refused to meet with her client, and as a matter of both principle and prudence, the client backed out of the deal. “When it wasn’t sold six months later,” the broker remembered, “the developer’s agent was calling me, saying, ‘He’s available now! He’s available now!’ By then it was too late. It was a power play. But [Mr. Barnett] overestimated the leverage that he had.” (Extell did not reply to the Observer’s request for comment.)

Ultimately, the tricky thing about bringing together buyers and sellers of real estate is the same one that afflicts most every human endeavor, which is, of course, that it’s awfully difficult to prevent people from being themselves. 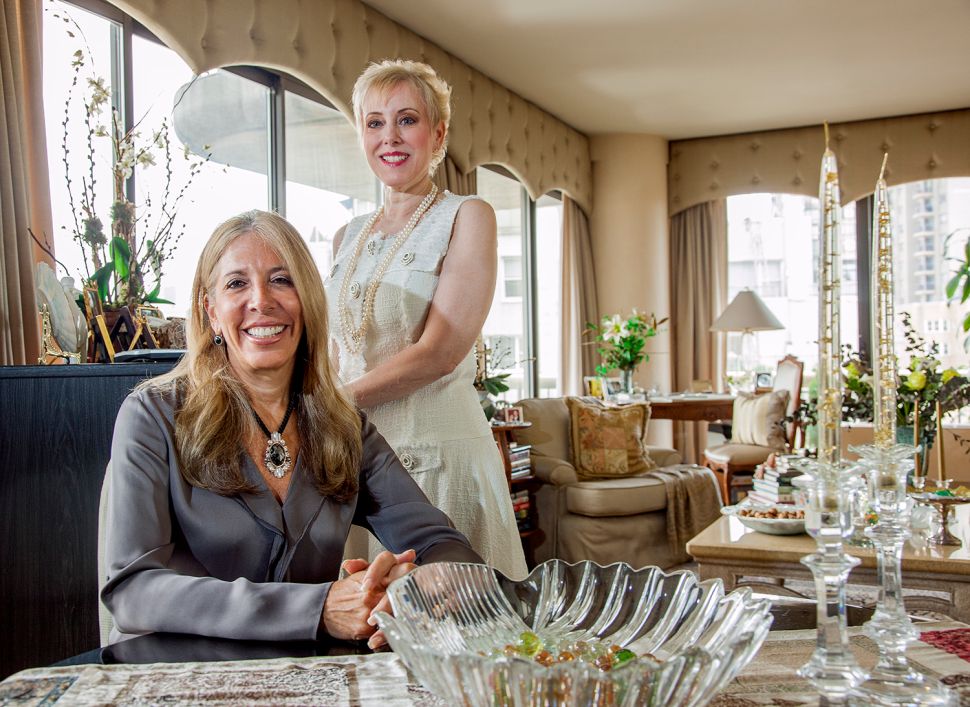