NEWARK – Mayor Ras Baraka’s most ardent followers demanded nothing less than Che Guevara in combat boots and campaign hat, hardly believing their champion could find himself in suit and tie and hard hat alongside a similarly sleeves-rolled up Acting Republican Governor Kim Guadagno.

But that’s what went down today, as Baraka – newly prized by Essex County Executive Joe DiVincenzo as Newark’s indispensable man – found himself hand over hand with DiVincenzo and in the inevitable public proximity of the front office, this time embodied not in the presence of the New Hampshire and Iowa barnstorming Gov. Chris Christie, but by the state’s LG and acting governor Guadagno.

It was a great, cutting edge cause, by thunderous public acknowledgement.

The occasion was the city and state christening of the world’s largest indoor vertical farm, situated in the Ironbound amid sagging silos and Velvet Underground spent speaker system generators on apparent factories or former factories of dubious origin and intention.

AeroFarms, in partnership with the City of Newark, Goldman Sachs, United Fund Advisors, Prudential, Dudley Ventures, and EDA, will build its 69,000-square foot state-of-the-art world headquarters at 212 Rome Street, the home of a projected 78 new jobs and 2 million pounds of leafy greens annually. The project rose out of work done by the Booker Administration.

Guadagano and Baraka did the helmet and shovel honors.

When someone mangled her name at the microphone, Guadagno reminded Newarkers that she is, after all, an honorary Newarker, who worked in the city at the U.S. Attorney’s Office and went to law school here.  “I get it,” she cracked. “Guadagno is really hard to say – except in the Ironbound. Really!”

DiVincenzo sat in the front row of a makeshift tent throughout the ceremony, an imaginary halo of recognition intensifying every time someone said the words “public private partnership.” He and Baraka test drove mutual poses of admiration as shutters snapped.

“I’m just so excited,” said the mayor, who praised the ingenuity and dedication of AeroFarms CEO David Rosenberg and RBH Group CEO Ron Beit. “Ron inspires m to go back and become more excited about the city.”

Baraka noted a “synergy” of people excited about the city: everyone from local partners to the county to the governor’s office.

Now in 2017 guv mode as Christie grapples with a 2016 Republican Prez Primary field, Guadagno took pains to elongate the optics of Newark to include all of New Jersey.  She went beyond that even.

“This will feed people not only in Newark but the people of the world,” said the acting governor. “The solution is right here on the property you’re standing on. Of course, it had to be in the Garden State.”

Some time ago, Baraka’s backers might have thrown cold on the notion of a Baraka-Guadagno partnership.

Now they actually do, with the effect of improbably creating a vertical vegetable emporium in the Ironbound. 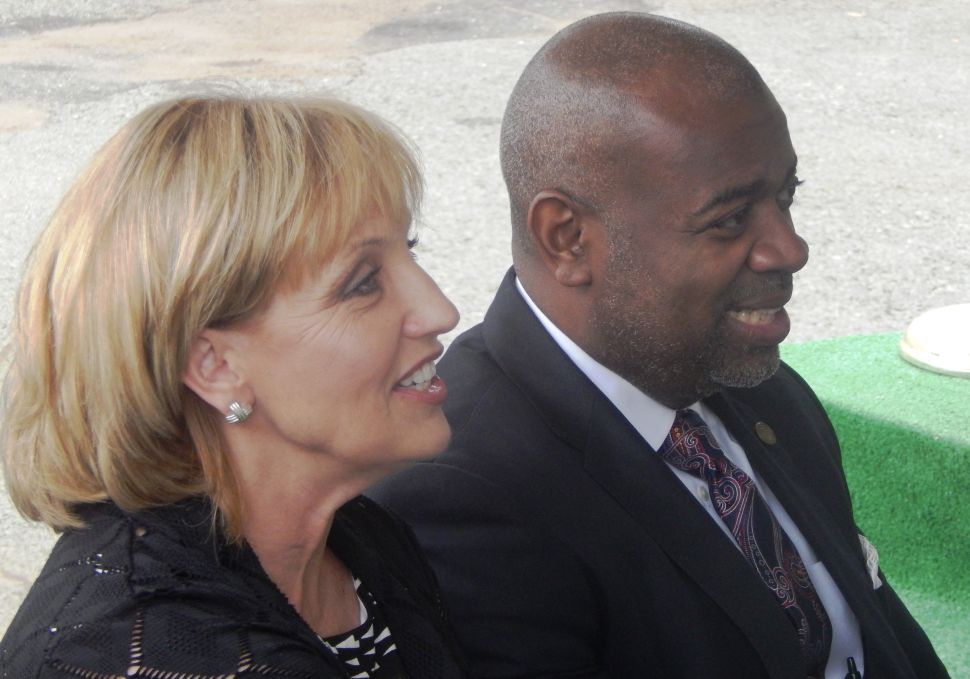