A special, in some ways very intimate, exhibition of public art by New York-based conceptual artist Hank Willis Thomas will be hitting the streets of Brooklyn August 4.

The Public Art Fund and Barclays Center developer Forest City Ratner will present the solo show of three brand new works by the artist, plus pop-up appearances of his interactive, traveling project In Search of the Truth (The Truth Booth), a collaboration with artists Ryan Alexiev and Jim Ricks of The Cause Collective.

Poised to be the highlight of the ten-month-long show, the Truth Booth first kicked off a world tour at the Galway Arts Festival in Ireland in 2011. The 16-foot-tall by 23-foot-wide video booth is shaped like a giant speech bubble, and prominently features the word “TRUTH” written above its entrance. Upon entering, visitors are prompted with the phrase “The truth is…” and given the opportunity to record their thoughts with a two-minute video response.

In December, the Observer encountered the Truth Booth during its run at Art Basel Miami Beach, in Miami’s Collins Park. (There were long lines to get in.) The artist told us: “People have talked about failed relationships, about love, and family. They’ve talked about the notion of the truth, about dishonesty, about what’s happening to them right now, politics. The truth is ageless and timeless.”

The Truth Booth has recorded nearly 5,000 visitors’ responses to date. It will launch at the opening of “The Truth Is I See You” at MetroTech Commons and make pop-up appearances at two other Downtown Brooklyn locations, including Target Center Plaza on Atlantic Avenue, before the show closes next June.

“As a site that’s changed so drastically over the past 20 years, MetroTech seemed like the perfect place to do a project that at its core encourages cross-cultural understanding. Fittingly, Hank’s project really speaks to the changing diversity in Brooklyn today,” Public Art Fund curator Andria Hickey told the Observer.

Mr. Thomas’ artwork has often utilized the form of the speech bubble, commonly used in cartoons and comics, to display sentiments related to his ongoing exploration of the theme of truth.

Of the show’s brand new works, one will feature 22 speech bubble-shaped signs to be hung on light posts at MetroTech’s Myrtle Promenade, and include phrases from a poem he cowrote with Mr. Alexiev written in languages spoken across the borough. Statements like “The truth is I love you” and “The truth is I respect you” will be written on one side of the signs in languages ranging from Spanish to Arabic, and on the other side the messages will be translated into English.

Two benches, seven-feet-tall and nine-feet-wide, shaped like hallow speech bubbles with the interior space open for seating will also be displayed. A third work at MetroTech will be a large-scale tree sculpture with small speech bubbles dotting its branches like leaves.

“This newly commissioned body of work, his most significant public installation to date, extends both his artistic practice and its engagement with the richly layered Brooklyn community,” Nicholas Baume, Public Art Fund Director and Chief Curator said via email.

“Hank Willis Thomas: The Truth Is I See You,” will be on view until June of next year. 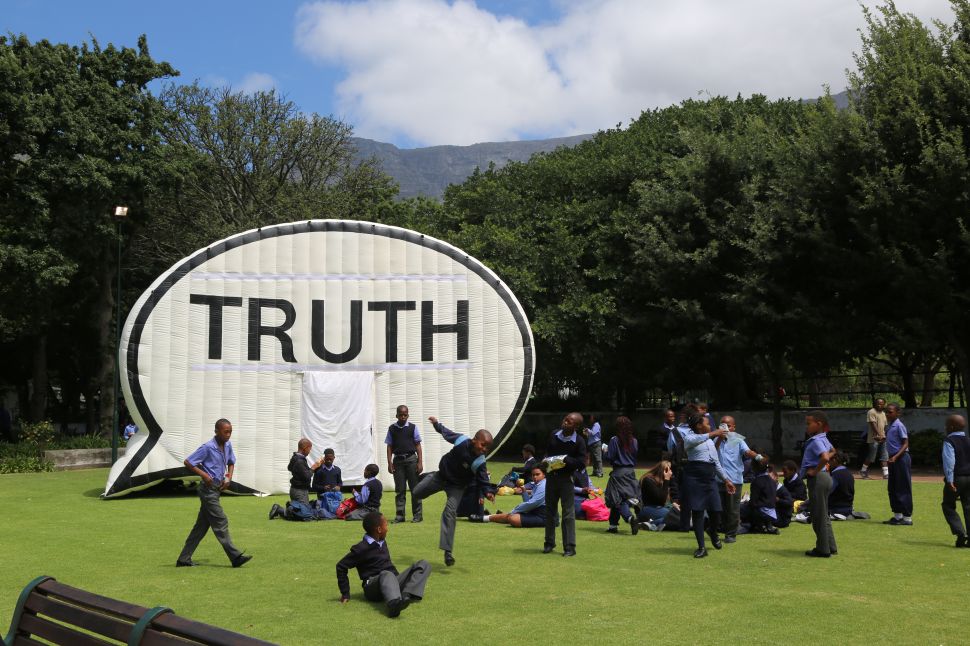