Thursday was certainly a big day for nefarious Mads Mikkelsen characters getting their bloody comeuppance. The day began with with some implied dismemberment via Rihanna’s “Bitch Better Have My Money” video and ended with him getting dragged across the floor via a hook through his calf in “Hannibal.” Of course, in the latter scenario, the cannibal manages to live another day by shimmying down the disemboweled body of Inspector Pazzi. The Accountant “AKA The Bitch” didn’t fare so well.

RIP, Rinaldo Pazzi. We hardly knew you. I mean, we knew you were going to die the minute you met Will in the season premiere and we definitely knew you were going to bite it in this particular when we saw you embrace your lovely, (and much younger) wife. It was pretty much written in stone when Mason Verger sent you to collect a fingerprint in order to claim a $100,000 advance on the bounty he placed on Hannibal’s head. Alana Bloom and her severe red lipstick didn’t really need to turn that subtext into text, but we appreciate it all the same. The fact that Hannibal turned Pazzi’s death into a tribute to a disgraced member of his clan from centuries ago was just the tragic cherry on the whole doomed sundae.

Here’s the actual line from the script, courtesy of comedian and actor Aaron Abrams, who plays the sadly absent lab tech Brian Zeller:

THIS LINE AIRING ON NETWORK TELEVISION IS AS AMAZACRAZY AS ANY CORPSE OR MURDER. #Hannibal pic.twitter.com/wpOHRrJe2d

In addition to following Bryan Fuller, Abrams’ tweets are a great companion to the show, mainly because the mood gets lightened with gems like these:

And then this one when Alana fielded a call from Hannibal from Pazzi’s phone:

Ugh it’s like just when you start to forget about them and you’ve moved on with your life of slaughtering, your ex calls. Amirite? #Hannibal

About that phone call, as with the reveal that Hannibal is feeding Bedelia seasonings that will improve her taste, Hannibal has a way of making already fair women go spontaneously pale.

As for Jack, he reached a turning point after ridding himself of the psychic baggage that comes along with still wearing his wedding ring and carrying Bella’s ashes. That turning point involves fucking Hannibal up. To call the rematch of last year’s kitchen battle a fight would be too generous. No, this is an entirely one-sided exchange which involves Hannibal’s face being tossed through plate glass, his arm getting mangled in one of his myriad torture relics, and finally dragged across the floor after having an iron hook plunged through his leg.

“How will you feel when I’m gone?” Hannibal asks, amid the carnage.

However, as alive as he would feel with Hannibal put down, he lets the doctor scurry off into the night like a wounded animal. He’s leaving the pleasure of finally snuffing Hannibal out to someone else.

That someone else is riding a train with Chiyoh, talking about snails and being suggestively shot as if to appear next to her while shirtless in bed, only for us to learn that they’ve been sleeping in separate train car bunks. Chiyoh became an infinitely more interesting character once her motivations and allegiances became murky upon the reveal that she’s been witholding Hannibal’s location from Will. Plus, at this point, we probably all wanted to toss Will Graham off of a moving object, if it means we get some actual movement on his storyline. Prior to the toss, Chiyoh surmised that Will was plotting on killing Hannibal in order to become him, which is a nice way to revert the whole “If you kill your enemy, you become just as bad” line of reasoning running through most fictional adversarial relationships.

“There are means of influence other than violence,” Chiyoh reminds Will, with a kiss. ”But violence is what you understand.”

And as he is disarmed by the kiss, Will Graham is tossed off into the night and onto the tracks. He’s not down for long as the black stag nudges him towards Florence and hopefully nudges his stagnant character into some goddamn action. 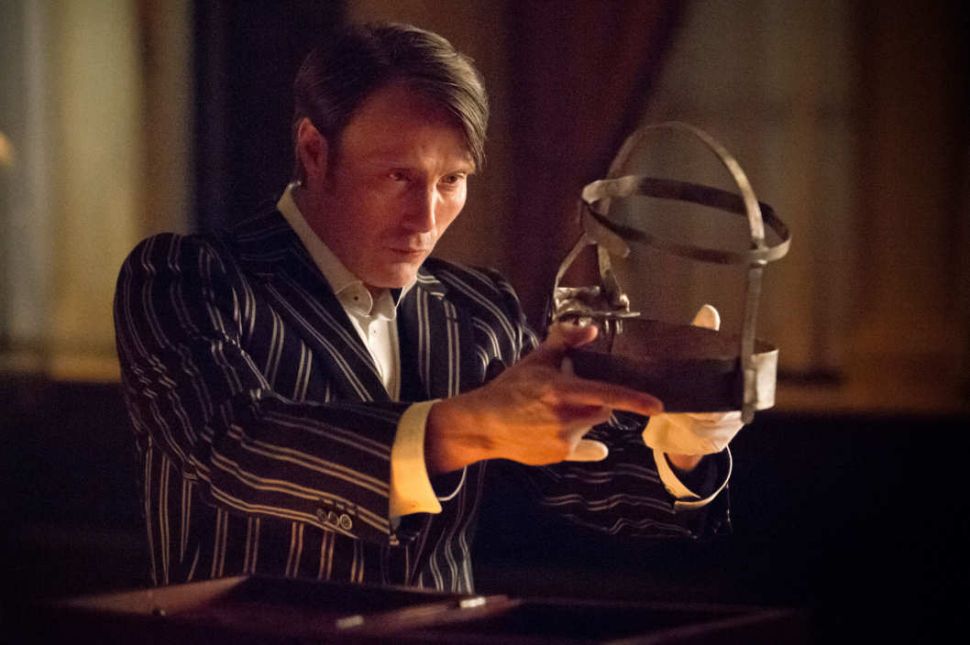