I’ve often considered Hannibal the most homoerotic show on TV, or at the very least, the most homoerotic show on network TV, what with Will and Hannibal often talking about their intense bond and how they’d like to run away together and care for Abigail on some imaginary farm or whatever. Then there’s the constant talk on Hannibal’s influence on Will’s psyche and how his influence is “entering” Will and diminishing his own agency, not to mention that Hannibal once left Will a public Valentine of a human being mangled into an exposed heart. That’s especially true of Hannibal and Will’s meeting at the Uffizzi gallery where Hannibal is lovingly sketching Will (and Bedelia) in front of a Botticelli and given to saying things like “If I saw you every day forever, Will, I would remember this time.” I mean, we can all agree that’s some pretty gay stuff right there.

So, it was a little surprising that Bryan Fuller made the homoerotism more overt and less coded with women instead of men, hence the kaleidoscopic tryst between Margo Verger and Alana Bloom. As trippy as the effects were, I can help but think that the psychedelics were a way to circumvent the fact that you can’t throw a full-on girl on girl Skinemex scene on NBC at 10pm on a Thursday, despite how beautifully Fuller would have shot it. It’s kind of a great tactic. When you can’t show something head-on, just make it look like the background to a Jefferson Airplane performance.

Still, the alliance of Alana and Margo is one we all saw coming as a way for the two to overthrow Margo’s deranged brother Mason. Oh, and Margo’s version of pillow talk involves cajoling Alana is stealing her brother’s sperm, and presumably carrying the Verger seed since Mason rendered Margo sterile, so it should be interesting to see how that plays out. That’s a fun family with which Alana will never regret getting involved.

As for the hetero-eroticism, Bedelia extricates herself from Hannibal’s grasp simply by walking out the front door. She does give him a sexy send off with all the double entendres about being eaten and consumed. Given that Hannibal looks like a wounded animal rendered uncharacteristically vulnerable with the cops and bounty hunters closing in, he’s not in much of a position to argue. She does bathe him and stitch him up in a scene parallel to Hannibal stringing up the corpse of Inspector Pazzi. Anyway, sultry exits asides, Bedelia’s got drugs to shoot up and the moment she announces herself to Chiyoh as Hannibal’s psychiatrist with her arm tied off is a great bit of comic relief. It’s up there with the moment Hannibal gives an appreciative “atta girl” after learning she shot Will in the shoulder.

There’s method to Bedelia’s drug use. If she can inject herself with the same cocktail fed to Miriam Lass, maybe she can avoid prosecution by passing herself off as a captive observer in a drug-induced to Hannibal’s bloody European tour rather than a willful observer. One sleazy Italian detective already seems amenable to this plan, despite the fact that he clearly won’t buy the ruse that she actually believes she is Norman Fell’s wife. Gotta hand it to Bedelia for committing to that longshot, though.

At the moment, it looks like she’s going to come out this Italian excursion in much better shape than Will and Jack. They’re getting a do over from the bloody dinner party from last season, but they’re ultimately supposed to end up as the main course. This is made abundantly clear when Hannibal starts serving an incapacitated Will a subpar soup that is intended to season Will rather than nourish him. Plus, Jack’s previous episode’s victory is short lived, as he has tendon in his ankle split after a doped up and strapped down Will manages to utter the scariest words in the English language “He’s under the table, Jack.”

The last thing the sedated Jack gets to see is Hannibal taking a goddamn circular saw to Will’s skull. Naturally, the blood splatter is shot in glorious detail thanks to director Vincenzo Natali . Clearly, Jack has to be regretting not finishing off Hannibal when he had the chance.

That’s the last we see of Jack as Hannibal and Will are next seen strung up along Mason Verger’s dead pigs. Verger has already enjoyed an explicit fantasy, aka cooking sequence, of how he would like to consume Hannibal and his man servant is all too happy to put that plan into motion. Naturally, Glenn Fleschler has some experience playing creeps and psychopaths who relish their sick hobbies, what with his turn in True Detective, so he’s good to go as the ominously soft spoken Dr. Cordell. Plus, between Cordell, Verger, Hannibal, and the various monster of the week-style serial killers who have come through town,  is Baltimore just a Hellmouth, but for psychopaths?

Although Hannibal and Will are strung up by Verger, the question remains as to who delivered them. It could have been the dirty cop getting handsy with Bedelia, but he seems like an unworthy adversary, especially when Hannibal has already outsmarted and maneuvered far more memorable and gifted rivals. Was it Chiyoh, who rode the elevator up to Hannibal’s hideout with Jack, but didn’t enter the room with him? Sure, she’s always been protective of Hannibal, but Mason Verger is offering up Brewster’s Millions piles of money. She could easily buy ten decrepit villas in Lithuania with that kind of bank. 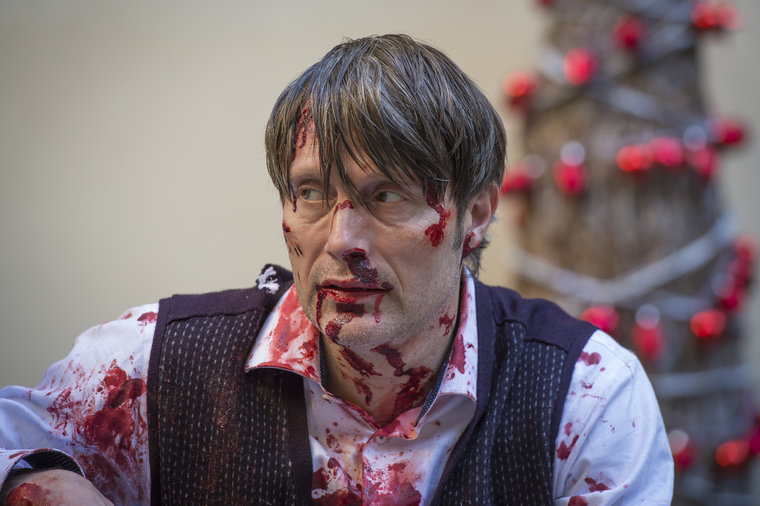