If there are two things we learned from “Digestivo” it’s that:

First, the polizia. What a bummer that it was the sleazy cop who was last seen feeling up the drugged Bedelia that ended up capturing Hannibal. Damn, if that flesheating psychopath didn’t deserve to go out to a more worthy adversary. Still, the dirty cop does his best villainous mustache twirling as he instructs his corrupt officer brigade to cut Jack open with the bone saw and make it look like he’s Hannibal’s last victim. Given how he’s chewing the scenery, it’s kind of surprising that Sleaze Cop didn’t just opt to have Jack tied to some train tracks.

Unfortunately, corrupt Italian cops are also bad at being corrupt. Two get shot down with Chiyoh’s surgical shotgun precision before they have a chance to hack through Jack’s skull. The no name cops join Inspector Pazzi in the mass grave of Italian law enforcement looking for the quick easy payout on a cannibal’s bounty. You might as well call her Chiyoh Ex Machina at this point. Anyway, once Jack gives up Hannibal’s location at Verger’s muskrat farm , she frees him from his chemical prison and even gives him one of the dead cops’ handguns to boot. Then, she’s off to cross international borders with a rifle the size of a middle school boy in the middle of a growth spurt attached to her.

Things don’t look so lucky for Hannibal and Will back at Muskrat farm. During a dinner where Hannibal and Will are dressed up in their tailored fined and chained to the dinner table, Mason Verger goes on and on about how he can’t wait to eat Hannibal’s severed dick after it is meticulously prepared. Between this and the “spitters are quitters” remark he made at Alana Bloom the other week, it’s safe to say that Verger is fixated with having Dr. Lecter’s schlong in his mouth. Of course, the twist is that Verger wants to consume Hannibal’s while wearing a mask made out of Will’s face. That should add an exciting new dimension to the volumes of slash fiction written about the Will/Hannibal sexual tension.

Of course, given Verger’s penile obsession, it’s only right that he meets his end with a very phallic eel forcing its way down his throat, at the hands of Alana and Margo. If Verger had to die, at least he got to do it with something long and hard in his mouth.

Plus, it’s not like the death wasn’t satisfying for Margo given the false hope Verger about hiring a surrogate to carry a Verger heir. When he snatched her reproductive organs from her during last season, it appears that he managed to salvage the embryo created during the Will and Margo tryst. However, instead of letting her eggs go all “Humpty Dumpty,” he implanted one into a surrogate without telling her. Of course, we should have known what was coming when Verger said that the surrogate was “on the farm.” However, most of us were as surprised and horrified as Alana to see the sonogram of the near full term, but still born baby inside the dead porcine surrogate. The pig baby mobile establishes Mason as far and away the most fucked up person on the show, which is saying a lot. Hannibal was right, in the end, Mason was going to deny Margo the very thing he promised.

By comparison, Hannibal is the far more honorable psychopath, albeit, a psychopath that looks bemused and bored while bound up in pig restraints, listening to creepy manservant Cordell talk about the great detail with which he will slice and cook Hannibal’s tongue. He seems far more joyful while bound to the table, listening to Mason’s plans to dismember and eat him. As a self-styled artist when it comes to carving and cooking the flesh, Hannibal can’t help but appreciate good work. He also beams like a father watching his infant son take his first steps while watching Will bite a chunk off of Cordell’s face while he’s in the midst of applying moisturizer to Mason’s future dinner mask. Have you ever seen a man crack so many smiles while he’s in what is ostensibly his last days?

Still. what makes him the more honorable of the flesh eaters is that he keeps his word to Alanna about rescuing Will, carrying the passed out profiler across the snow like a husband carrying his bride over the threshold, while a guerilla Chiyoh picked off his pursuers with sniper precision. It had to have hurt Alanna to cut the former lover who almost killed her out of his restraints. However, the fact that she got to rip a handful of his hair out of his head in order to plant forensic evidence linking him to the murder of Mason Verger must have eased the sting somewhat.

She was right about one thing, though, if you play with your food long enough, it does bite back. Cordell found that out after Hannibal cut himself out of the Fifty Shades contraption in the pig stye and managed to surgically remove the man’s face like a butcher cutting a thin slice of prosciutto. Hannibal must have also procured the vial full of baby batter with the cattle prod on Verger’s prostate when he was under general anesthesia awaiting his Will Graham face transplant. That part was left off camera, but it’s not like it wouldn’t have been amazing to see Bryan Fuller try to get that one past NBC’. All the kaleidoscope effects in the world couldn’t have made stealing jizz palatable for the prime time audience, but damn if this show is anything but daring and audacious.

Hannibal’s heroics are all leading up to the inevitable breakup from Will, who is no longer intrigued by being “identically different” to the cannibal. In what looks like a therapy session in Will’s now dogless little shack, Hannibal brings up the teacup metaphor giving Will the opportunity to drop the equivalent of  an “I love you, I’m just not in love with you.” The dude has just had one too many near death experiences as it is. The thrill is gone. Plus, the real litmus test was when Will glanced mournfully over at an empty dog bed and realized that he missed Winston and company more than the man who was partially successful in cutting open his skull with a bone saw. Epiphany!

Yeah, Will, we miss your dogs too. Where are you dogs? At the shelter? The kennel? With the world’s most reasonably priced dog-sitter?

As for me, I’m going to miss Hannibal in his gloriously patterned suits showing off his boss culinary moves in his spacious kitchen given that he willfully surrendered to Jack Crawford in an attempt to always be close to the love of his life, Will Graham. Someone should drop a copy of He’s Just Not That Into You, into Hannibal’s glass cage at the hospital for the criminally insane. But hey, to paraphrase Morrissey, the more Will ignores him, the closer Hannibal gets. 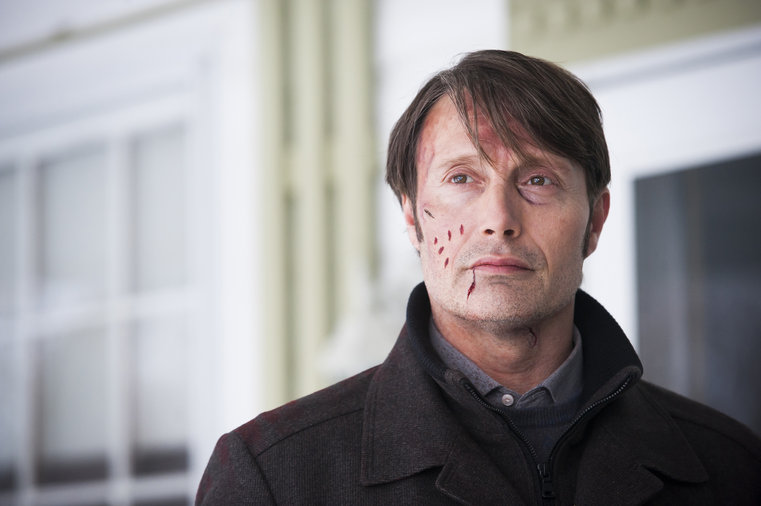