The story of Francis Dolarhyde was first told in Thomas Harris in the 1981 novel Red Dragon, before being rendered onscreen by Tom Noonan in 1986 and then Ralph Fiennes in 2002 before Richard Armitage picked up the role in 2015. The story of the serial killer known as “The Tooth Fairy” is reaching almost Batman origin story-levels of repeat depictions. In fact, it poses the question as to whether Red Dragon is a story that needs to be told again. For starters. both Michael Mann and Tom Noonan set a pretty high bar for Dolarhyde in the wildly underappreciated Manhunter. However, the fact that the last dalliance the public had with Dolarhyde was in Brett Ratner’s wildly forgettable Red Dragon, that’s as firm an argument for retelling the novel as any.

As one would expect, Bryan Fuller makes the source material all his own. In Manhunter, Dennis Farina’s Jack Crawford makes the trip down to Florida to find Bill Petersen’s overly masculine Will Graham fixing boats for a living and showing off his bronzed legs in purple short shorts. Fuller’s post-FBI Graham is still slight and squirrelly, with Laurence Fishburne’s Crawford reconnecting amid a gentle snowfall at Will’s rustic cabin. Graham seems stable and centered, what with a wife, Molly, a young stepson and a cadre of dogs to look after. However, the set of well-paced antlers rising behind Jack’s head as they all sit around the dinner table indicates that he’s there to fuck that stability up. Of course, the fact that the so-called Tooth Fairy Killer is murdering families that appear to have achieved the same domestic bliss Will enjoys is as good a motivation as any to pull him back into the profiling game that nearly drove him to madness. In the source material, Hannibal got so deep into his psyche that it drove him to spend time in a mental hospital. The show broke with tradition by having Will’s finally straw be a near face amputation at the hands of Mason Verger’s creepy manservant. The show also broke with tradition when it had Will’s wife Molly, played by Nina Ariande, persuade him to get back into a game, rather than act as the voice of dissent. Man, is she ever going to regret encouraging Will to get back in touch with a psychopath that is essentially the emotional equivalent of an ex-lover.

As for the psychopath in question, he’s in a spacious cell in the Maryland Hospital for the Criminally Insane. Alana Bloom took over Chilton’ reign of the glorified prison and she exposits that Hannibal is avoided the federal death penalty by pleading insanity. Of course, we know that Hannibal is acutely aware of right from wrong and just DNGAF, which is vastly different from being insane, despite what his tendency to eat people would suggest.  Still, although it must be satisfying to have her ex-lover under lock and key, Hannibal alludes that he’ll still make good on a promise to kill her. Just because he’s a remorseless predator doesn’t mean that he doesn’t operate under a certain code, and as we learned, that code includes keeping his promises. His cell is barebones and utilitarian, but through the filter of his memory palace, Hannibal converts into an amalgamation of his dining room and study, complete with roaring fire. He even retreats into his memory palaces death by converting a media circus complete with a bunch of sensationalist Freddie Lounds’ Tattler headlines by converting the whole media circus into a performance by a young castatro in a remarkably less ornate church than the ones he staked out in Italy. Is the singing eunuch a nod to how emasculated Hannibal must feel now that he’s caged behind a wall of bulletproof glass? Perhaps.  a Still, it’s a little sad to see the usually impeccably dressed Hannibal clad in his washed out grey jail jumps and his meticulously styled hair cut all nondescript and boyish. Out of all the incarnations of Hannibal, this is probably the one that audience could come the closest to rooting for, especially after last week’s grandiose heel to face turn where Hannibal carried his beloved Will across the snow and surrendered himself to Jack so that he could always be close to his darling broken bird Will.

As if being caged behind glass isn’t an indignity enough, Hannibal now has to endure Chilton bragging about his new book subject, The Tooth Fairy Killer, stealing the public fascination that Hannibal previously enjoyed. Well, there’s that and the fact that Hannibal is now reduced to eating blood and chocolate pudding in shackles and with an undignified plastic spoon. And there’s not a harpsichord in sight. Oh, the humanity.

“You, with your fancy illusions and fussy aesthetics; you’ll always have niche appeal,” Chilton says of Hannibal’s lack of Dolarhyde’s mass appeal, and thus making a meta-observation and subtle fuck you to NBC as to why the show got the axe.

As for Will, part of putting him back in the field means the show resets itself to its partial procedural format it relied on in the first season and part of the second season. That return to form is solidified by the welcome reintroduction of lab techs Jimmy Price and Brian Zeller. Way to get the band back together again!

When Will enters the Leeds house, he revives the “this is my design” pendulum swoop that has come to define his unusual methodology. In the crime scene, Bryan Fuller invokes one of the most memorable and arresting shots of Manhunter when he depicts the mirror shards placed in Mrs. Leeds’ eyes and mouth. However, this is more than mere homage as we see Will clearly reflected in each orifice. Well, there’s that and the fact that the red blood spatter threads behind Will seem to evoke the dragon wings from the William Blake painting The Great Red Dragon and the Woman Clothed in Sun, the same painting that Dolarhyde had tattooed on his back in the beginning of the episode.

For Will, old habits die hard when he’s discussing the fate of the Leeds family’s dog and Jack tells him not to worry about the dog. Don’t worry about the dog? Jack, have you ever met Will Graham. Aside from the dog, the ticking clock posed by the lunar cycle already has Will on edge and he proposes that he meet with Hannibal in order to get some insight into the killer. Any excuse to see an ex, right?

As for Dolarhyde, he’s introduced as a tormented specimen, meticulously sculpting his body and prosthetic teeth  in preparation for whenever he succumbs to the voice that is wreaking havoc in his head. In the meantime, Will is preparing himself for the havoc that Hannibal will wreak once he gains entrance into Will’s own psyche.

It’s likely that these are the last few episodes will effectively play out as the series’ swan song. The series has always thrived on filling in the blanks of Hannibal and Will’s story not fleshed out in the Harris novels or films. However, by reimagining well worn territory, Fuller is going out on a highly ambitious note and it seems like he has the chutzpah and craftsmanship to pull it off. 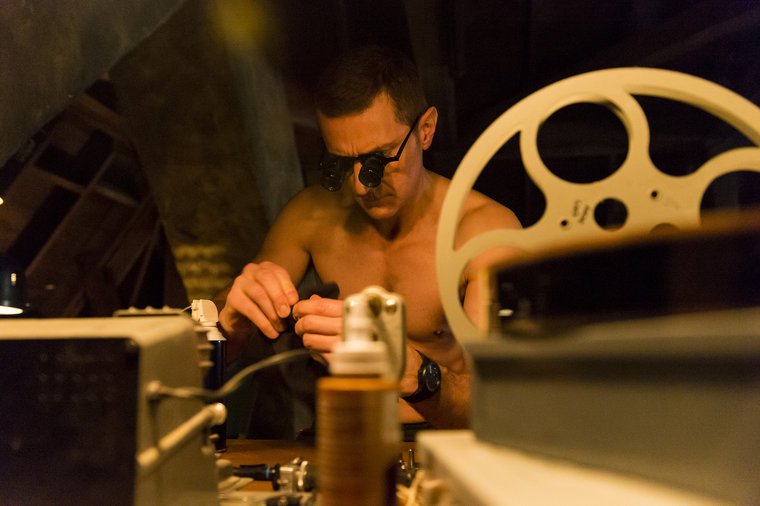