Spend enough time in an Apple store and you’ll realize it’s a lot like Vegas—the crowds of people walking aimlessly, the ability to lose a month’s salary in minutes, the lack of clocks on the wall. Spend more time still and realize that even the lyrics to the music playing on the speakers are part of the company’s marketing strategy.

When you feel young and empowered after U2 or Coldplay comes on the speakers at an Apple store, it isn’t a coincidence.

In the classic Smiths song “Please Please Please Let Me Get What I Want,” Morrissey’s plea is a lonely and desperate lament, the Moz reaching out to some unknown force in search of love, happiness and a stable life. But in the context of an Apple store, what does Morrissey actually want? An iPod.

Ditto “Under My Thumb” by The Rolling Stones, one of the strongest tunes off 1966’s seminal Aftermath, which finds Jagger singing about being the dominant and controlling force in a relationship. The song has a sordid history—it was playing when the Hell’s Angels stabbed Meredith Hunter to death during the infamous Stones show at Altamont.

In Apple stores, though, “Under My Thumb” is a clever nod to iOS devices like iPhones and iPads, which involve you touching the glass screen located, you guessed it, under your thumb.

“If you’re smart enough to hear it and it’s not done overtly, [the lyrics] in a lot of ways remind you how smart Apple is,” said Joel Beckerman, owner of sonic branding company Man Made Music and author of The Sonic Boom.

“It’s very sort of what you expect from Apple, a little moment of surprise, a little rush when you hear what they’re doing.”

Smart though Apple may be, the company is not exempt from consumer speculation as to what sort of tricks they play to encourage spending. So when you feel young and empowered after U2 or Coldplay comes on the speakers at an Apple store, Mr. Beckerman reminds us that it isn’t a coincidence.

“Apple’s had this maniacal obsession with picking perfect music—they almost have their own genre,” he said. “And in some ways it’s genre-less music, vaguely optimistic, vaguely cool, it’s got a zeitgeist to it that reminds you of approachable hipsters.”

And this sonic branding goes deeper than just the artists or lyrics Apple promotes. In his book, Mr. Beckerman lays out a chart that lists the instruments and sounds making a song in relation to the emotions they evoke within a listener. Strings bring on feelings of warmth, scale or scope. They are passionate and uplifting. The synthesizer comes across as modern, forward thinking and evolutionary, while the piano comes off as heartfelt, emotive and personal. Electric guitar evokes power, youthful energy and rebellion. Add these ingredients together to make a Coldplay song, and with it, all the brand values Apple’s culture holds dear.

Deeper still is the scientific research proving the correlation between how fast the music is in a retail store and how much money the customers are spending.

“The overhead music in the store, warm and inviting, brings you in to this technological Shangri-La—[it] definitely puts people in the mood to be open to things,” said Mr. Beckerman. “You can put them in the mood to slow down. This is actually one of the primary research points I can point to. With the right tempo music, you get people to slow down in a retail store.”

If you ask Martin Lindstrom, chairman of marketing and neuroscience company Buyology, Inc., the research about song tempos and spending has to do with how fast a customer’s heart is beating.

‘We’ve seen a lot of tests conducted over the past year showing that if you play 10 pieces of music for me, I’m able to predict in turn what type of news and what type of stories you’d like to hear more about.’

“We know there is a correlation between [how much] time people spend in a store and, of course, the amount of money they’re spending.”

Such sonic branding decisions seem deliberate on Apple’s part because they are part of a much larger ecosystem. With the launch of Apple Music and the upcoming Apple News service, the information Apple collects by analyzing your music tastes can have broader applications.

“You have to remember that they’re the largest aggregator of credit cards in the world, and they’re also the ones who’ve had the most interaction with any person on planet Earth, in terms of data and what they know about music profiles,” said Mr. Lindstrom.

“We’ve seen a lot of tests conducted over the past year showing that if you play 10 pieces of music for me, I’m able to predict in turn what type of news and what type of stories you’d like to hear more about.”

If it seems an odd shift for Apple to try to break into the news market soon after a major leap into streaming music, looking deeper reveals a clear correlation between the two.

“If you analyze young people’s news consumption patterns you notice that around 30 percent of the news they read about is music related,” said Mr. Lindstrom. “So they already have a credibility among the younger audiences, because people by nature feel that Apple is closer to the artist than almost any other type of news outlet out there.”

“If you have a base of 30 percent, that’s a pretty good starting point, and on top of that [Apple] is also appealing to our senses.”

Sound is certainly an important sense for Apple to control. Sight, too, is something they demonstrate an understanding of with streamlined, close-up product images in advertising and the divine symmetry of such products’ presentation, both in stores and online.

“What they’re doing is literally activating every one of your senses,” said Mr. Beckerman. “ Except smell. Maybe they need to do smell next.” 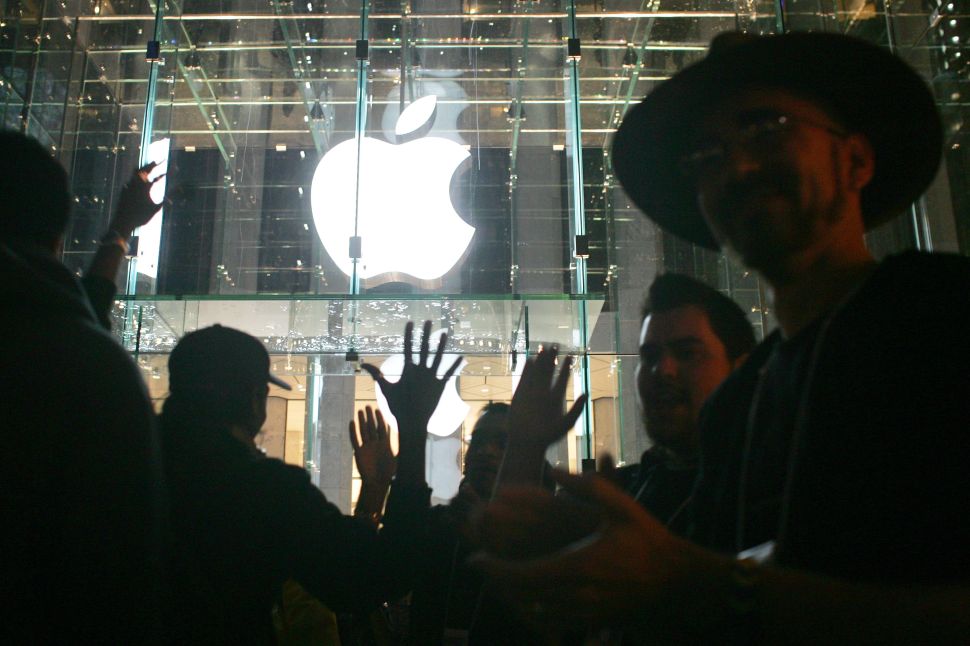