The Sharknado movies—the premise of which I really don’t think I need to spell out at this point—are supposed to be bad. I get it. That’s the whole point, isn’t it? That’s why the first one was such a success in the first place—it towed the line perfectly of being just the right amount of bad to still make it fun to watch and, so much more importantly, deride online. The second one, subtitled, um, The Second One, was more of the same times 100. It was a movie designed from the ground up to be made fun of on the internet, which is a system that in theory sounds bonkers but it works. People can’t stop talking about Sharknado.

But how long can this system hold out? Well, enter Sharknado 3: Hell No, which is almost impossible to review. How do you get across the point that a movie is really, really bad when it’s supposed to be bad? At no point was watching Oh Hell No fun (definitely not as fun as UNIVERSAL STUDIOS ORLANDO). I didn’t even want to add my comments to the Twitter-verse, because what was I going to say about Sharknado 3 that I hadn’t said about Sharknado 2 or 1? “OH DAMN, that vaguely recognizable person just got…eaten by a shark!” Or, “Tara Reid, am I right?”

Basically, if I had to describe Sharknado 3: We all saw Jurassic World, right? Who am I kidding, everyone saw Jurassic World. If not, there’s this extended scene where a woman gets torn apart by Pterodactyls, and it’s pretty tonally out of place and uncomfortable, and the whole thing just goes on for much longer than it should. The whole time, you’re thinking “Wow, this character really didn’t deserve this gruesome of a death.” Sharknado 3 was that scene, but stretched out over two hours. At around the hour mark, I was checking the clock frequently and despairing for how I spend my time. Unlike the first two movies, it didn’t feel like I was participating in a Sharknado night. It felt like I was subjecting myself to it.

That’s the thing about the Sharknado (shudder) franchise. It’s the only vehicle where in order to maintain the Twitter impressions, the buzz, the viewership and dare I say the brand, Syfy and The Asylum need to ensure that every subsequent Sharknado movie is worse than the one that came before it. For Sharknado 3, the formula seemed to be “get more D-List cameos, then have a shark, I don’t know, fall out of the sky on to them?” I’m as mad at anyone that George RR Martin is taking so long to write Winds of Winter, but that doesn’t mean I need to see him introduced, killed, and beheaded in a Sharknado movie all in the span of ten seconds.

(I refuse to say the franchise jumped the shark, I refuse!) Sigh. So the franchise sort of jumped the shark last night. (Spoilers, for those out there who really care about the ending to a Sharknado movie) Last night, Sharknado cut to black with Tara Reid’s April Wexler in mortal peril, and you get to decide whether she lives or dies. And if you think a hashtag isn’t involved, you really haven’t been paying attention.

There’s so much to be upset over in that Tweet, not the least of which is the shortening of Sharknado to ‘Nado. Or the assumption that anyone in this universe or any other universe would vote to keep Tara Reid in anything, ever. Or the very fact that there’s going to be a Sharknado 4 at all. But most of all, it’s just one more gimmick to add on to a movie that itself is already a gimmick. It doesn’t feel like audience participation is a step up. It just feels like a resigned “this is just going to keep getting more annoying, isn’t it?”

So what’s next? What could even be next? They already sent the damn sharks into space, and they already got king of the unwanted cameo David Hasselhoff. Maybe time-travel in Sharknado 4: Shark to the Future? Perhaps zombies in Sharknado 5: The Wading Dead? The gritty reboot in Sharknado 6: The Shark Knight Rises? Then of course topped off in Sharknado World, which is set in a distant future where Sharknadoes have been controlled and contained for the public’s amusement, but the young generation has become bored and jaded and would rather look at their iPhones than the whirling cloud of sharks right in front of them, so of course the park has to genetically create a bigger Sharknado, a badder Sharknado, but they soon learn that humans should never play God and it’s up to Chris Pratt and his shark friends to…..this is just Jurassic World again, isn’t it? Apologies.

In the end, if I’ve learned anything from Sharknado 3 last night, it’s two things. 1) I don’t know how much longer I can keep beating a dead shark. If the Sharknado franchise’s plan is to keep lowering the quality to make it easier for me to make fun of it on Twitter, is it even fun anymore? 2) Seriously, I don’t know why but I need to plan a vacation to UNIVERSAL STUDIOS ORLANDO immediately. 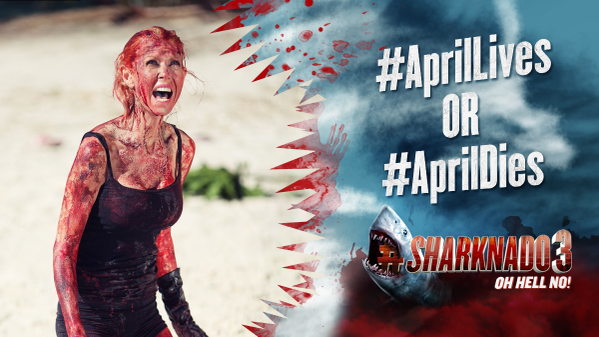