Last night, CBS debuted Zoo, an adaptation of a James Patterson novel of the same name that asks the question “what happens when animals stop being polite, and start getting real?” It stars James Wolk as zoologist Jackson Oz, Kristen Connelly as journalist Jamie Campbell, and Billy Burke as a pathologist Mitch Morgan all trying to solve the mystery of why the lions, tigers and bears of the world have up and decided they enjoy eating people now.

And there’s a large, shady corporation involved, and Jackson’s father was kind of insane and predicted this was all going to happen, and there’s many scenes where lions growl menacingly in underbrush before eating multiple people’s heads. It’s all a little ridiculous. And it’s a mystery show. We’re supposed to ask why? Why is this happening?

And I’m just sitting over like okay…but how much better would this all be from the animals’ perspective?

Right? Zoo is nothing we haven’t seen before. Oh, you mean there’s a kid watching an end times documentary right before that exact end times event occurs? Oh, wait, you mean there was a scientist that predicted this end times event would happen, and everyone called him insane until it was too late? Are you telling me the journalist called out the semi-evil corporation that was probably behind all this, and was fired for it? Heavens, don’t tell me she’ll have to solve this one off the grid.

Instead of all that, think of what we’d have if this show was told from the animals’ perspective. We’d get scenes of zoo animals plotting after all the zookeeper leave for the night. Oh man, they’d have meetings and everything. We would see Nick and Eddie, the two sibling zoo lions from the first episode, organizing their escape. Like, drawing maps with their paws and working out signals and stuff. I don’t know, I’m just riffing. How great are Nick and Eddie as names for a buddy-heist TV show, by the way? Oh man, CBS. You messed up.

Also, another benefit of focusing on the animals over the humans? No dialogue. Just subtitles. Subtitles I can do. You know what I can’t do? Zoo‘s dialogue. The dialogue is, to borrow a phrase from the show itself, worth about “two heaping tablespoons of baboon dung.” Here’s an example, said with utmost sincerity: “Free will is what separates us from the animals. Free will and this truck.” Nope. Stop. Kristen’s anti-corporation blog she runs under a pseudonym is discovered by her editor due to Kristen’s constant use of the word pettifoggery. Pettifoggery. Raise your hand if you know someone who has used the word pettifoggery even once. Put your hand down, you one liar.

Oh, that’s another thing. Yeah, we only see the shenanigans of some lions in the first episode, but you have to expect we go into some other species. This opens up the opportunity for some solid gold. Instead of that ridiculous scene where that dude doesn’t notice a fully grown lion, an animal that can roar louder than humans can even tolerate, is sneaking up while he takes a piss outside a bar, we could have a scene of say, gorillas having secret underground meetings. Like, tearing pictures of humans out of magazines. Using them as dart boards.

Instead of that equally ridiculous scene where a French woman sincerely asks “How does one get eaten to death??,”  we could have a scene where, I don’t know, a bunch of sharks work together to outsmart a bunch of dumb fishermen. Wait, do sharks count as animals? I guess they’re fish, so would they be involved in the animal revolt? Doesn’t matter! Because CBS and James Patterson made the decision to focus on the humans.

At the conclusion of the first episode, Kristen and Mitch solve the second mystery of the show: what’s up with all the missing house cats? Turns out, they’re all hanging out in the same tree. 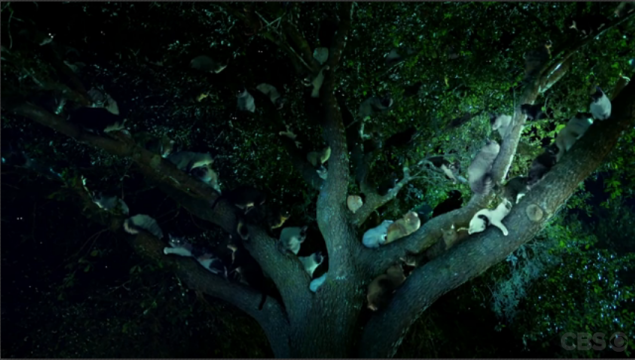 HAHA. What do you think they’re talking about up there? We could have found out. We could have known if CBS did this the right way. I bet not one of those cats uses the word pettifoggery. Not one. 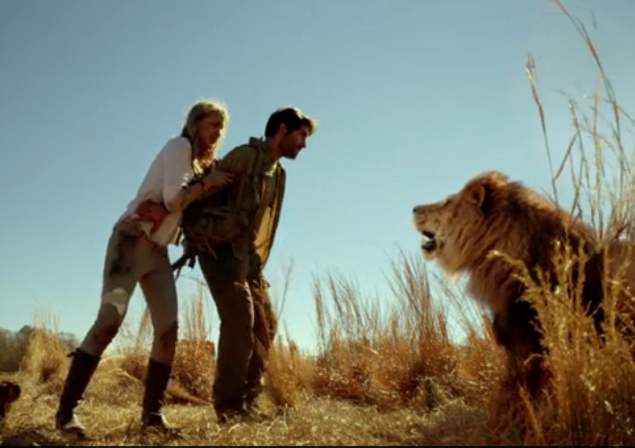