The intrigue of sneaker culture lies in the fact that it is both an equalizer and a mark of exclusivity – both egalitarian and elitist. With everyone from rappers and hedge fund managers to athletes and middle schoolers alike finding ways to sport sneakers regularly, the trend has entirely pervaded the fashion world for both utilitarian and aesthetic reasons. But beyond the fashion world, the sports shoe culture has taken on an iconic significance of its own.

The basketball sneaker, in particular – from the basic 1917 Chuck Taylor All Stars, to Nike’s full selection of Air Jordans and the Run DMC endorsed Adidas shoe – represents a long tradition in brilliant endorsement, in racial transition, in the emerging Hip-Hop scene and in the commercialization of athletics.

In fact, sneaker culture is so intricately nuanced that curator Elizabeth Semmelhack has devoted an entire show to it. “The Rise of Sneaker Culture,”  her carefully assembled exhibit, is dedicated to the complex social history of the footwear, spanning all the way from the development of rubber-soled shoes in the 1830’s to models released only in the past year from Nike, Adidas and Reebok. The gallery, featuring around 150 sneakers, departed this summer from its birthplace at the Bata Shoe Museum in Toronto to show at the Brooklyn Museum of Art from July 10th through October 4th, and will continue on to the Toledo Museum of Art on December 3rd. The show comes along with a fully illustrated catalogue published by the American Federation of Arts in collaboration with the Bata museum and Rizzoli publishers. It comes packed with essays, interviews and an enormous collection of images all examining the social and cultural politics of sneakers.

The Brooklyn Museum installment of the show features glass cases sheltering each of the individual sneakers like the precious works of art that their captions suggest they are, punctuated by in-depth explanations of their make and why it matters. Telephone wires hang across the ceilings with sneakers flung across them in true Brooklyn fashion, and a number of other various multimedia pieces alluding to the shoes’ personal and public weight adorn the gallery’s walls. It includes everything from the original Chuck Taylors and the 1920’s canvas Keds through recent runway designed kicks by Christian Louboutin and Raf Simmons. The exhibit shifts back and forth between well-researched scholarship and popular appeal, offering few questions unanswered with regard to both.

In light of men’s fashion week, Ms. Semmelhack and her colleagues have hit on something important: the fact that sneaker culture not only represents a major force to be reckoned with in the world of fashion, but also, as Bobbito Garcia writes in the text’s introduction, “sneakers have become agents of social change”. Popularized by their utility in the sports world, they became iconic, larger-than-life, with the emergence of the Hip-Hop scene, with particular fervor in New York. While nearly every sneaker made cool in the 1970’s was worn first on the basketball court, the Hip-Hop scene pushed the industry’s boundaries in terms of material, color, even cut. It made the more adventurous sneaker that much more wearable for the general public. “In the 1970s, New Yorkers in the basketball and hip-hop community changed the perception of sneakers from sports equipment to tools for cultural expression” Mr. Garcia writes.

Looking at the racial politics of sneakers, Ms. Semmelhack writes, “young African-American men weren’t so much being advertised to as they were being advertised through.” Sneakers claimed their significance on the feet of African-American men and that became a status symbol of great importance.  By 1980,  approximately 75 percent of NBA players were African American, according to Ms. Semmelhack’s text, and these high-achieving athletes were selling sneakers hard and fast to inner city kids, and thus the “sneaker-head” culture was born.

In terms of fashion, the sneaker has become a crucial element of masculine expression: in a world that insists on jeans, slacks and button downs as the male uniform, sneakers are an avenue for color, expression, and personal style.  “Sneakers have allowed more diverse images of male success to be imagined in men’s fashion,” Ms. Semmelhack explains. “When you think about the tech genius or the athlete or the rapper, none of them look like a Wall Street banker. They’re expressing new models of masculine success. The sneaker is central to that.” Sneakers, according to Ms. Semmelhack, allow men to take a much greater risk in their wardrobe, without being chastised for it. In fact, at present, sneakers are available as a viable, appropriate clothing option for a wider demographic of men than ever before, worn with everything from suits to sweatpants.

“Lately we have seen a blurring of the dress codes” explained Dan Rockwood, the U.S. editor for Mr. Porter, in the gallery’s affiliated text, “The rigid formality of tailoring has softened up with the introduction of deconstructed jackets…and at the same time, sneakers have smartened up their act.”

A look at the U.K significance of sneakers in the 70’s reveals that the punk scene, too, had an emerging reliance on the classic high-top Chuck Taylor, in addition to low-topped skippies, both of which could be found on a number of the members of the Ramones as well as on the feet of Sid Vicious himself. They then trickled into the British athletic scene with trainers that came affiliated with footballers – Puma, Adidas, Diadora and other Italian brands of athletic shoe  became status symbols of great importance. Eventually, trainers dispersed themselves throughout musical groups like The Happy Mondays, as well as throughout the club and rave scene, in London in particular. The U.K, too, found a way to embrace sneakers in an aesthetic that was anything but athletic, contributing to the continual off-court popularity of the sneaker in its many forms. The trainer movement, as it grew out of the punk era in the U.K, severed to further democratize the sneakers as one the most eclectic of fashion statements.

Ultimately, the sneaker has come to rest as an emblem of both the inclusivity of the fashion world and the social change that has accompanied that shift on an international level. It’s difficult to ignore the force with which this pervades the everyday, appearing everywhere from runways to conference rooms to Brooklyn sidewalks.  Ms. Semmelhack’s exhibit is a reminder of the immense power and intricate history that comes along with the sneaker, and for that matter, the democratization of fashion as a whole. 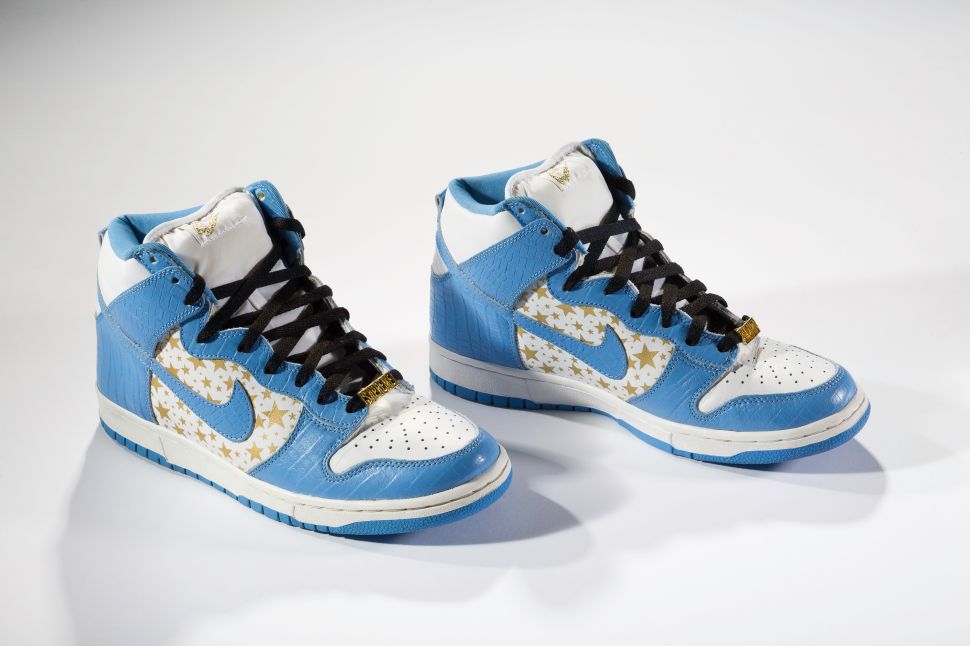