Bob Andrzejczak (D-1), a decorated serviceman, continues to intensify. With the ailing economy of LD1 looming large over an area dense with veterans, it’s unclear who will find the greater foothold with voters.

While Andrzejczak will still be running under the auspices of Senator Jeff Van Drew (D-1), it will be his first time defending his seat in a general election and headlining the ticket. In 2013, Van Drew tapped Andrzejczak to replace retiring Assemblyman Matthew Milam (D-1). Though Van Drew has been vocal in his support of Andrzejczak’s nomination, the senator will not be on the ticket himself in 2015.

For Fiocchi, who narrowly defeated Nelson Albano (D-1) in 2013 and yielded Republicans their only additional seat during that election cycle, this will be his second time out of the gate.

With the candidates evenly matched in on-the-job if not election year experience, the LD1 race may hinge on the crossover appeal of Fiocchi’s and Andrzejczak’s respective running mates, and whether either side can draw in voters from across party lines.

Andrzejczak’s running mate Bruce Land is a Vietnam War veteran who has received the same anointment from Van Drew that Andrzejczak received in 2013. Together, they could draw a significant number of voters primarily concerned with veterans’ affairs away from the Republican ticket.

Van Drew described the two as “amazing candidates that have amazing qualifications and credentials.” When asked about the candidates’ war records, he added “I think people react to that because if they can make decisions under fire in wild and dangerous situations, certainly they can make decisions while under political fire or bureaucratic fire or public policy fire.”

Cumberland County Freeholder Jim Sauro, Fiocchi’s running mate, could have distinct advantages of his own. As a long-time member of the Board of Freeholders, he has the edge over Land for experience in local politics. Republican strategist Chris Russell argues that he will also have business savvy on his side the eyes of voters.

“While Sam and Jim both deeply respect and admire the men and women who serve or have served in our armed forces – and that includes their opponents – the key question for voters in this campaign is going to be determining who is most qualified to fix South Jersey’s economy and help to revitalize the local job market,” said Russell.  “In that case, we win hands down.”

Russell also had harsh words for what he characterized as Andrzejczak’s meek response to the issue of new construction of casinos in North Jersey, a change that opponents fear would further gut gaming revenues in Atlantic City and affect many of those who commute from LD1 into Atlantic County.

Referring to the fact that Andrzejczak did not sign Assemblyman Chris Brown’s (R-2) draft resolution opposing the new casinos, Russell said that “Assemblyman Andrezjczak had a chance to defy his own party bosses and sign his name on the dotted line opposing North Jersey casinos, and he failed.”

Assembly Minority Leader Jon Bramnick (R-21) agreed that the Republican ticket’s strong suit could prove to be Fiocchi and Sauro’s shared background in the private sector. 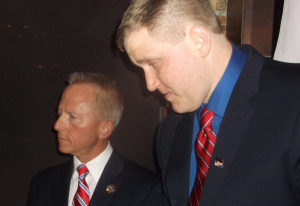