Since the New York Post reported Tompkins Square Park is experiencing a supposed surge in its homeless population (and made one of its reporters pretend to be homeless), the park has seen both Mayor Bill de Blasio and Police Commissioner Bill Bratton pay surprise visits, and an increased police presence. On Tuesday, an NYPD watchtower appeared.

But is homelessness in the park actually getting worse? Speaking to park workers and local businesses in the area, many seem to be in disagreement about the state of the park.

A Tompkins Square Park worker, who asked not to be identified, said he “can’t help but see an increase in the number of homeless people who choose to camp out in the park over the past month.” But Mohamed, an employee at Kasadoro Deli—a grocery store that faces the park—told the Observer that, to him, it seems that the number of people he sees sleeping on the grass appears to be the same as always.

The alleged increased police presence has not been received well by some locals. Penny Rand, who lives nearby the park, started a petition to remove the tower. Since Tuesday, a parody Twitter account has been set up for the police tower, mocking its purpose in the park.

Dennis Lynch, a park employee who works at the public pool in Tompkins Square Park said that, if anything, he’s seen a sudden decrease in the number of people sleeping in the park. “Since last week, everything has changed,” Mr. Lynch said, referring to the higher number of police officers regulating park.

And while nearby homeless shelters, such as The Bowery Mission, work hard to house the city’s homeless, they can only house limited numbers. Sometimes, residents are evicted if they don’t comply with rules implemented by the Department of Homeless Services.

According to the New York City Department of Parks & Recreation, it is working with the Department of Homeless Services to help engage with the city’s homeless. “Tompkins Square Park is closed every night by NYPD, who also patrol the area during off-hours,” a Parks Spokesperson said in a statement to the Observer. “Sleeping during the day in a park is legal—just as sunning oneself on a beach or lying down on a picnic blanket is—and homelessness is not a crime, it is a symptom of larger inequality issues that this administration is addressing every day, at all levels.”

The statement added that “the City’s street homeless operation has expanded significantly under Mayor de Blasio.”

Over 60 people have joined a Facebook event calling for a weekend long “Tompkins Square Park Campout” spanning August 7—9, to protest the NYPD watchtower. The creators of the page describe the tower as “a clear and blatant violation to first and fourth amendments rights to public assembly, free speech and privacy.” 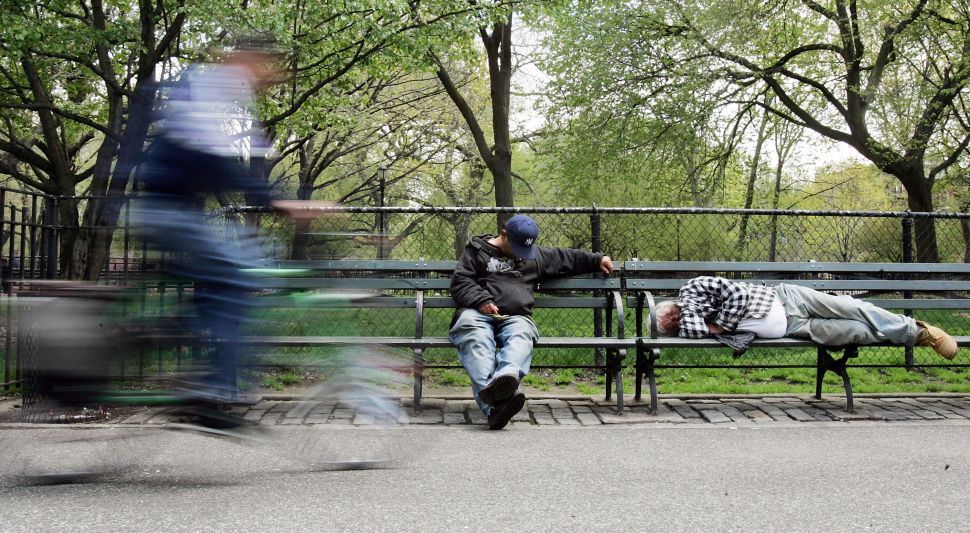