I’m going to describe a plot to you, and I want you to close your eyes and tell me if it sounds familiar. Well, don’t “literally” close your eyes, because you still need to read the words on this page and tell me that I’m right in my latest FAN THEORY about our favorite show about truth detecting, True Detective. Ready?

From the Wikipedia of the show’s premise (emphasis ours):

The show revolves around a mouse named Mouse Fitzgerald, nicknamed “Fitz”, who is fond of beer and caught in a world of espionage, love and the delights of odd jobs. The show employs a serial format, and its ongoing storyline developed from absurdist comedy to include mystery and thriller elements. Fitz begins to recover suppressed memories that he once had a wife and a child who have now vanished. This leads him to seek answers about his past and the shadowy forces that seem to be manipulating his world.

Fitz suspects there is a sinister conspiracy which appears to revolve around fields of “asprind [sic]” pills beneath the city, and Shark, Clock, and Rectangular Businessman’s attempts to control the nature of time and reality. Fitz and Skillet receive help from Liquor, Roostre (Scott Luallen), Stoned Peanut Cop (Nick Weidenfeld) and others as they engage in gun battles, blow things up, and try to understand cryptic hints. The show also sometimes contains surreal “subliminal” images that flash across the screen during key plot moments, including skulls, mustached snake beasts and people screaming.

(NEXT PART CONTAINS SPOILERS, KIND OF?)

The series concludes the revelation that Fitz has been kidnapped and placed into a simulation by the Shadowy Figure. He is about to be killed by Shark and the Rectangular Businessman, in their true forms outside the simulation, when he is rescued by the true form of Peanut Cop and a nurse who works in the simulation chamber. They kill Shark and Rectangle Businessman, but it is unknown if they are truly dead because the simulation in which most of the show takes place is probably taking place in another simulation. One of the purposes of the simulation seen in most of the show was to extract information from Fitz. The conclusion to episode 20 is ambiguous as to whether or not it is actually the end of the series, as some aspects of the plot remain unresolved – Golden Joe says “I thought this was done,” to which Fitz replies, “I thought so too. I guess we’re not.“

This show was aired in “installments” instead of seasons, much like True Detective‘s genre-defying eight episode anthology. And they were SUCH trolls about it.

An Adult Swim bumper shown with the sixth installment claimed that twenty additional episodes were being produced and taunted viewers who had complained they couldn’t understand the absurdist presentation.

But it’s not just that the premise and the marketing of these two shows that lead me to believe Nic Pizzolatto is just copy-mousing this great program. It’s that, despite it being a little less visually stunning than True Detective, the dialogue in Mouse is eerily similar; trafficking in the same kind of trippy, non-sequiturs and paranoid twitchiness. Vaguely menacing authority figures make nonsense proclamations, while Mouse himself stands somewhat outside the reality of his own world, speaking to the violence and terror of it in a removed fashion.

You could basically listen to this 12 Oz Mouse scene and imagine it as a fan fiction mash-up of Rust Cohle and Ani Bezzerides’ first date:

And then there was just Mouse, who speaks for all the truest detectives.

The shadowy figures of this show were also perfect. Shark is Vince Vaughn and Rectangle Businessman is like…I don’t know. Marty? Voiced by someone who sounds like Archer’s H. Jon Benjamin?
[youtube https://www.youtube.com/watch?v=9seRlGtECl4]

Who’s THE GREAT RED ONE? Is it perhaps the Yellow King in disguise?

The opening of 12 Oz Mouse, however, might be the clincher. Like True Detective‘s second season, it favors visuals over a discordant music track, though they’ve gone with heavy metal instead of Leonard Cohen.
[youtube https://www.youtube.com/watch?v=nuugMVFUjAI]

“You don’t understand, you don’t give a damn?” That’s the most True Detective sentiment ever.
Guys, you know I’m right. Spread the word. I’ve figured this whole thing out. And I’m feeling a little apoplectic* myself.

By the way, you can watch all the 12 Oz Mouse episodes over at AdultSwim.com. Enjoy your new yellow king. His name is Skillet.

*Still haven’t Googled that word yet. 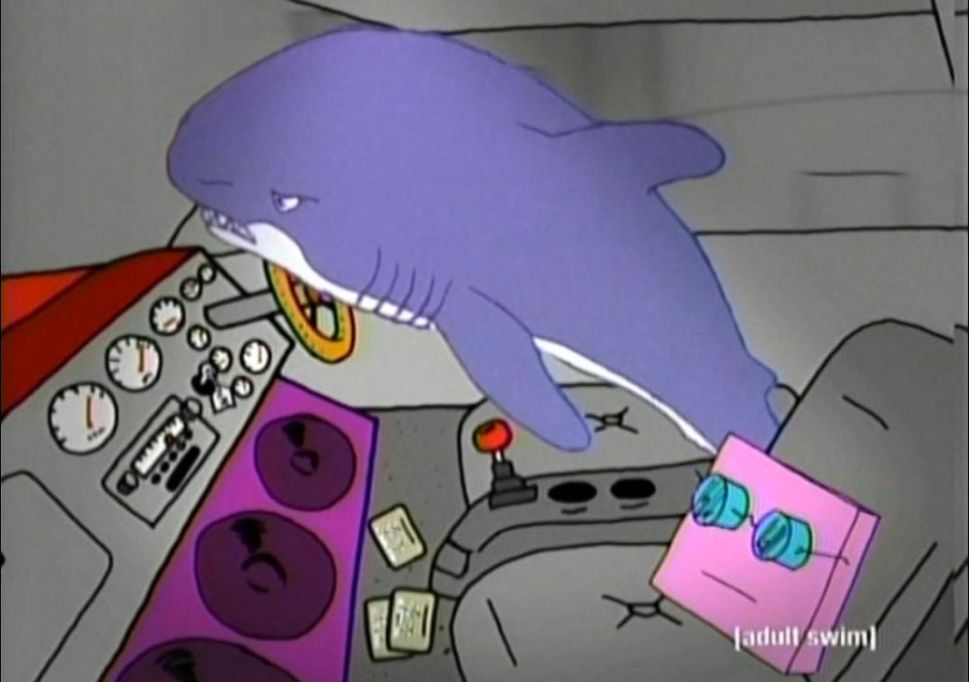