This week, the Bea Arthur Residence—an 18-bed homeless shelter for LGBT youth—announced that renovations would be completed in 2016, the most recent item of good news for the LGBT community, which has finally been getting the recognition and real estate it deserves of late.

Most notably, last month the Stonewall Inn was designated a New York City landmark in a unanimous vote by the Landmarks Preservation Commission, the first in the city to be recognized because of its importance in LGBT history. (And in non-real estate related matters there was, of course, the milestone Supreme Court decision that legalized gay marriage throughout the United States.)

As for the Bea Arthur Residence, it was named in honor of the actress who gave immense support to the LGBT community. Carl Siciliano, the executive director of the Ali Forney Center, wrote in the Huffington Post that the mostly city-funded $3.3 million project would not have been possible without her help. (Ms. Arthur performed at fundraisers, spoke publicly about the center in interviews, and left $300,000 to the organization in her will.)

Located at 222 East 13th Street, the city turned the building over to the Ali Forney Center, a nonprofit aimed at helping homeless LGBT youth, and also supplied most of the funds for its renovation alongside Housing Preservation non-profit Cooper Square Community. Abandoned for nearly twenty years, the building required a total gut renovation (being undertaken by Builders-R-Us Construction Corp), which is projected to be finished in time for the residence to open next year.

The Bea Arthur’s pending debut follows on the heels of the re-opening of the extensively revamped LGBT Community Center, which has been at 208 West 13th Street since 1983. Starting in 2013, it underwent a $9.2 million renovation, focused on bringing a more open, light atmosphere to the space, that was made possible through a combination of city, state, and private funding. The LGBT Center includes arts and culture programs, recovery and wellness initiatives, and is also home to a bookstore, event space, new lending library and an archive of nearly nearly 5,000 volumes and 190 manuscripts. The renovation also helped highlight the Center’s art collection, which includes Keith Haring’s “Once Upon a Time” and Kenny Scharf’s “Love Life.”

Meanwhile a handful of LGBT bars, which often function as de-facto community centers, also had a reasonably good year, marked most prominently by the recognition of the Stonewall Inn as a city landmark. And while skyrocketing rents forced iconic gay bar Boots and Saddle to vacate the Christopher Street space it had occupied for four decades, The Real Deal recently reported that the western-themed drag bar signed a ten-year lease for a new space, also in the West Village, at 100 Seventh Avenue South. And the new location is 2,600 square feet—over triple the size of the Christopher Street space.

While the destruction of a Soho rowhouse several years ago divided LGBT activists over to whether the community should focus their efforts on preservation of historic properties or investing in new spaces to meet the needs of the community, this year’s victories highlight that, at least sometimes, you can have it both ways. 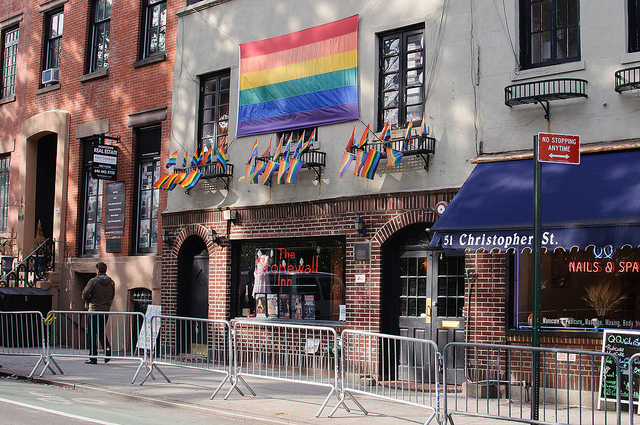