At a time in American history when the last two presidents representing both political parties have suffered from high disapproval, and disapproval of Congress has reached an almost unimaginable high of nearly three-quarters of the nation according to Real Clear Politics, John F. Kennedy remains widely admired and approved by the American people.

In late 2013 Gallup conducted a landmark survey of presidential popularity. While it is often said that presidential popularity rises after presidents leave office, Gallup analyzed polling for the 1,000 days that Kennedy was president and found that during that time, while he remained in office, the average number of Americans who believed that Kennedy was an outstanding or above average president—while he served and before he was assassinated—was a towering 74 percent. Gallup also found that Kennedy’s lowest approval rating while he was president was 58 percent, a figure that would be the envy of any president today.

Politicians today might ask themselves: What accounts for the magic of Kennedy’s popularity while he was office, which continues to this day?

Almost all presidential polling during the last decade has found that Kennedy was and remains the most popular president since Franklin Roosevelt with his highest popularity ratings from young people, who were not even alive while Kennedy was president.

Politicians today might ask themselves: What accounts for the magic of Kennedy’s popularity while he was office, which continues to this day?

Here is the answer I propose:

When I was a young man who came to Washington during the 1970’s and worked as a junior political assistant on the staff of Democratic Senator Birch Bayh, several of my bosses were former aides to John and Robert Kennedy. Late every Friday afternoon they would take me to the old Mayflower hotel where Kenny O’Donnell, the close friend and top aide to Jack and Bobby, would hold court and tell stories about the Kennedy years.

I lived for those Friday afternoons, sipping bourbon I was too young to drink and smoking cigars I was too young to smoke and listening to Kenny tell us about the hope and dreams he shared with Jack and Bobby when they stood together at the center of power in the White House. As someone who still calls himself a “Kennedy Democrat” today I remember vividly many of the things Kenny told us.

I was the youngest guy in the room by far, and one afternoon I asked Kenny what advice he would offer to someone just starting out in politics. He thought for a few moments and finally said:

“Son, there were mornings when we would get to work early and Jack and Bobby and I would sit in the Oval Office and talk about how we could change the world that day.”

And this is the core of the answer to the question about why the magic of the Kennedy appeal has endured so powerfully for so long:

Most Americans believed while Kennedy was president, and continue to believe today, that JFK embodied a politics of idealism and aspiration where both those who lead and those who follow should work to make politics a nobler profession and make the world a better place. Kennedy first made his reputation as a war hero in the service of America and as a leader he offered what he called a set of challenges and not merely a set of promises, and after he asked Americans what we could do for our country he offered a Peace Corps and an Alliance for Progress and other proposals that paid little money to give Americans a chance to do something positive for their country and world.

In the most important ways what was called Camelot was real. He inspired the post-war generation that returned from the Second World War to enter politics as means to improve America. He inspired young people to help the poor at home by working to lift them in the poverty-ridden regions of the nation, and inspired them to better the world by serving in the Peace Corps, and inspired them to be part of a cause greater than themselves by defending our security in the military or dreaming of soaring into space as astronauts with the American flag on the shoulders of their space suits.

The magic of Kennedy was not what he promised us, but what he asked from us. A whole generation of Americans of Americans of all ages was inspired to careers in public service carrying with them—-as some still do today—-his credo of patriotism through service.

This was Camelot—and this was real—unlike so much of politics today which is about image and maneuvering and self-interest and public relations.

Don’t get me wrong. From the days of my Friday afternoons with Kenny O’Donnell until the news in this mornings papers, I have known and worked with many of those whose names you know. They are all real people, imperfect in the eyes of God, and flawed in many ways. When they sit on the toilet they pull down their pants—or pantsuits—the same way we do. They make mistakes, occasionally do things that are wrong, and sometimes screw up which is the way of great men—and great women—just like the rest of us.

John Kennedy was no different. He was not a saint; he was human.

But in the ways that make great men great, JFK was indescribably different by standards of American politics. What Kenny told me was true: JFK did wake up in the morning thinking of ways he could change the world. And often he did.

Kenny once told us about how he, Jack and Bobby debated how far to go on civil rights. People often forget that during the 1950’s Martin Luther King was a Republican. Many of the states that were needed to give any Democrat a majority of electoral votes in presidential campaigns were segregated Southern states that had elected racist Democratic governors while blacks were being beaten, whipped and murdered.

Kennedy was not the earliest champion of civil rights. As a rich white Irish guy who knew the political risks of civil rights he adopted the cause slowly. But as he grew into the presidency and saw blacks being murdered in churches and denied entry into schools by racist Democratic governors who blocked the schoolhouse doors, Kennedy came to share the outrage of King.

Jack, Bobby and Kenny knew well that a president who became aggressive about civil rights could lose those Southern states and be denied re-election in 1964. They fully knew the risk, and took it, and when Kennedy became the first president to go on national television and say that racism and segregation were moral wrongs that had to be righted they set loose forces that changed the world.

How many politicians today would meet with consultants and take public polls and conclude that the risk of action was too great? Kennedy acted—and this notion of Camelot was real.

During those days in October 1962 when the Soviets tried to sneak nuclear missiles into Cuba at first all of his advisors favored a military attack against Cuba that historians later learned would have triggered a nuclear, because many of the missiles already in Cuba were more advanced than Kennedy was told by his military and CIA aides.

Anyone who wants to be president should read the book The Kennedy Tapes, which includes a transcript of Kennedy meeting with his advisors during the Cuban missile crisis. At first Kennedy was literally the only person in the room who opposed the military attack that would probably have brought a nuclear war. One by one his advisors moved to his position which led to the safe and happy ending that historians now effusively praise.

This, too, was notion of Camelot that was real.

Kennedy was different—for him the space program was an idea, a mission, a call to action with a great goal which is the heart of the matter of the mindset that is called Camelot.

Kenny O’Donnell told us how Jack, Bobby and Kenny wanted their wives and kids to be whisked out of Washington to bomb shelters in undisclosed locations. But the wives said no. They would not go. If nuclear war came they wanted their families to be together at the end!

Having faced the real time prospect of nuclear war and the question of whether their families should die separately or together if such a war came, JFK dedicated himself to nuclear arms control with a vengeance and passion which led to his famous speech at American University in June 1963 telling the world that we all breathe the same air and drink the same . This led to the Nuclear Test Ban Treaty and the history of arms control that followed and formed another part of the notion of Camelot that was indeed real.

Before Kennedy assumed office the Russians had successively launched Sputnik and were winning the race to space which could have given them decisive power over the free world in military affairs.

When Kennedy first pointed his finger to the moon and promised America would set foot there within a decade the world was astonished, the media was skeptical, and the employees of NASA were stunned by the boldness of the mission—and the rest is history!

When we read the magnificent book by Tom Wolfe The Right Stuff those events actually happened, those heroic astronauts were real, those triumphs lifted the nation to heights of excellence and adventure that brought scientific research and products that lifted the economy to new prosperity and new jobs. The very phrase “right stuff” became emblematic of a generation that made a difference and a president who called them to action.

Today our politicians debate the space program as a budget item, and America is dependent on the goodwill of Vladimir Putin to fly our astronauts to the space station on Russian rockets. But Kennedy was different—for him the space program was an idea, a mission, a call to action with a great goal which is the heart of the matter of the mindset that is called Camelot.

On healthcare Kennedy offered powerful reform that became Medicare after he died. At the Berlin Wall he said we are all Berliners and part of the free world’s answer to communism. The imperfections of Kennedy were far surpassed by his calls to greatness, his challenges as well as his promises, his vision of transforming his own war heroism into a daring and imagination and courage that he sought to inspire all American to show in their own individual ways.

This notion of politics towers above what Americans are offered by politicians today, with a long list of results and achievements that have lasting impact today. This is the heart and soul of the thing we call Camelot. It was real and accounts for the reason that John Fitzgerald Kennedy remains so popular today. 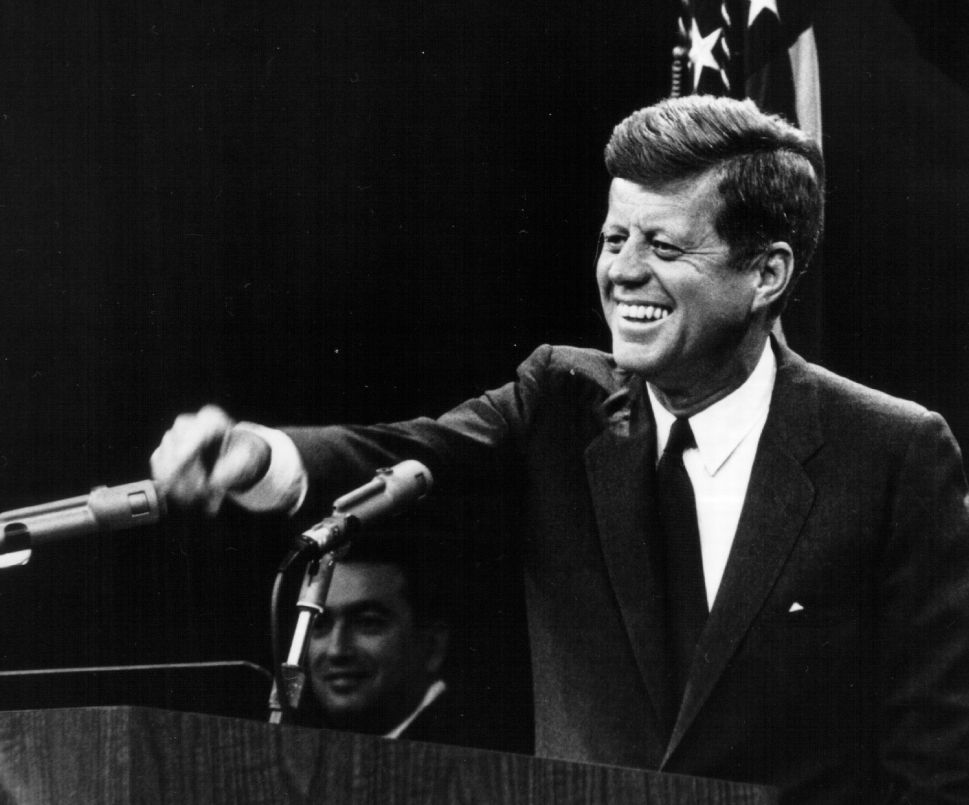