When we look back on the day the Middle East was born—and I mean the next Middle East, not the Arab-Israeli ex-colonial patchwork we have now—we will remember July 12, 2015, the day the Iranian nuclear agreement was signed. Perhaps in ten or twenty years, if we’re reconciled enough with the Islamic State, our Ambassador in Raqqa can deliver a cheery note on the anniversary. If not, perhaps the Saudis could do it for us. But in any case, the region is about to change.

The great danger of the nuclear deal was never that Iran would retain the ability to build a nuclear weapon. It would, and we’ve tacitly known that for years. The great danger was that the deal would remove the U.S. from the Sunni side of the regional balance of power and strengthen Iran without reconciling the Iranians to the Sunni-led order. The Sunnis, led by Saudi Arabia, are much weaker than the combined strength of Iran, Iraq, Syria, and Hezbollah, and rely on U.S. support to maintain the current status quo. Without it, Saudis will be forced to find other allies, and there’s not that many candidates around.

Much as the Obama Administration denies it, the nuclear deal significantly weakens America’s leverage in the Sunni-Shia conflict. In addition to the $100 billion Iran will receive, which it can spend on troops and Hezbollah, the deal creates a major disincentive for the U.S. to contest Iranian power regionally. If Iranian interests are threatened in places like Yemen or Syria, Tehran easily can create problems with the nuclear inspectors, and there’s not much we can do about it. The sanctions will be off, the money in hand. And having celebrated the deal, Obama is hostage to its success. He doesn’t want to go back to ground zero. It is easier, much easier to give way on the nickels and dimes of Iran’s regional complaints than to admit a massive failure and go through the diplomatic grunt-work of reestablishing the sanctions regime. And the Saudis know it.

At the very least, the Saudis and their Gulf partners are likely to tacitly withdraw from the war against ISIS, since Iranian money spent fighting the Islamic State is money that’s not going to Yemen.

Prince Bandar bin Sultan, the Kingdom’s quintessential Washington Man, made precisely this point in an article last week for Lebanon’s Daily Star and the Arabic-language website Elaph in London. He compared the nuclear negotiations with Iran to those with North Korea, pointing out that removing sanctions is irreversible while nuclear cooperation is wholly reversible. The North Koreans got the money, cheated on the deal, and got the bomb anyway.

All true, of course. But there was something else a little unsettling about Bandar’s article, in his conclusion: “People in my region now are relying on God’s will, and consolidating their local capabilities and analysis with everybody else except our oldest and most powerful ally.” Mmm. There’s that word, “local.” As in “local capabilities.” That’s not a good word. In the ideology-no-object realpolitik Disneyland that is the Middle East, “local capabilities” can mean all sorts of things.

In effect, Bandar is saying that the Iran deal does indeed pull the U.S. out of the regional balance of power. Without great power support for the first time since World War Two, the Kingdom will have to resist the Iran-Iraq-Syria-Russia axis with its local allies, like the Gulf countries, Egypt, Israel, and…well, all necessary means, really. Means that were previously denied to it by the likes and dislikes of the United States—including, perhaps, a certain enthusiastically Sunni state in Raqqa that’s currently taking on the entire Iranian coalition by itself.

At the very least, the Saudis and their Gulf partners are likely to tacitly withdraw from the war against ISIS, since Iranian money spent fighting the Islamic State is money that’s not going to Yemen. The great irony for the United States is that our joint interest in fighting the Islamic State with Iran is at least part of the impetus for reconciliation. But any battlefield gains from a cool détente with Iran might well be wiped out (or worse) by decreased cooperation with Saudi Arabia. It’s a pretty zero sum world over there.

Moreover, a Saudi-ISIS rapprochement is only one part of the problem. The strategic threat to America’s fight against terrorism has always been that Saudi Arabia or other rich Gulf States might eventually find it necessary to use those terrorists for their own ends, and thus the Sunni jihadis get an ally. The Kingdom’s citizens and foundations have spent the last thirty-five years funding radical mosques and madrassas in every corner of the world, influencing every Sunni radical movement from the Taliban to the Chechens to the U.S. prison population. They did so largely for domestic reasons, to bolster their internal religious legitimacy.

The Kingdom hasn’t tried to use Sunni radicalism as part of its foreign policy since the Afghan jihadis took down the USSR in Afghanistan. Bin Laden and his ilk have hated the Sauds since they turned down his offer of assistance against Saddam in 1990. But they’re still there, and a potent weapon, and certainly do hate Iran and the Shia. You can’t get much more local than that. And if you’re sitting in Riyadh, you’d certainly have to think about it. 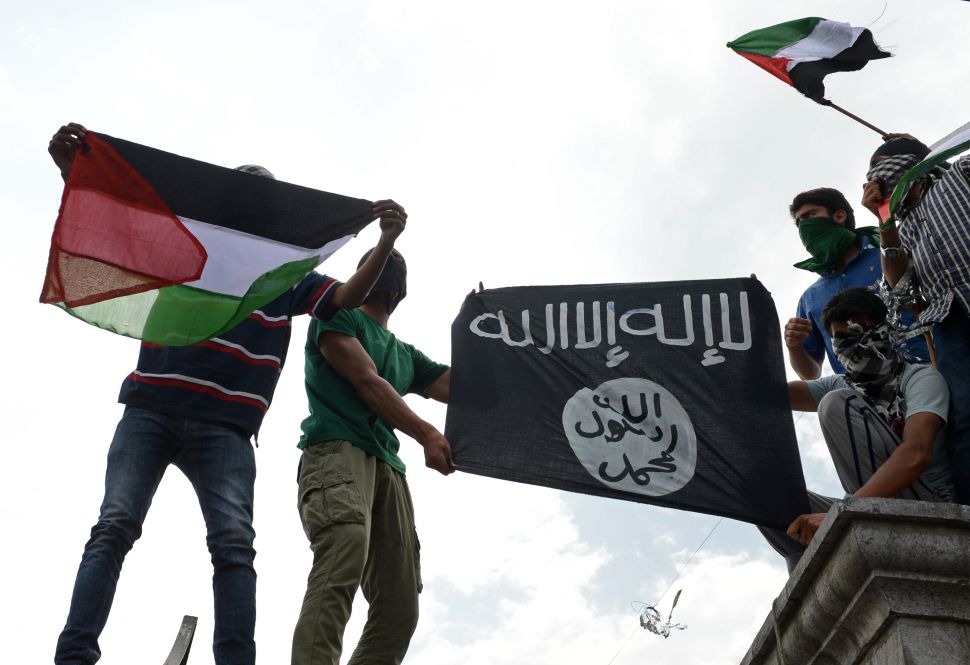