KC Green ran the super popular webcomic Gunshow for six years. It went from a tiny little enterprise to one of the most influential webcomics online. It made his career as an artist. Like a lot of comics, it filled a comfortable place in many people’s lives (including mine). In 2011, The Boston Globe included him in a roundup of the new webcomic entrepreneurs, people making a living (even a really good one) by posting comics for free online. At the end of last year, he pulled the plug on the title that made his name.

Now, he’s writing one other strip, BACK (drawn by Anthony Clark), and doing all the work on two others: Pinocchio (an interpretation of the original story) and He is a Good Boy (a story about an acorn kicked off its tree). He also does a strip about video games for US Gamer.

He’s also putting Gunshow to rest with its sixth, last and largest collected volume: a book which he’s currently seeking support for (in other words: preorders for $40 for the giant collected edition) on Kickstarter.

Ending a popular strip is something of a rite of passage for artists in this space. Box Brown also walked away from the strip that made his name, Bellen. Julia Wertz walked away from a popular but somewhat offputting title, Fart Party. Those are two examples, but successfully navigating that shift is a sign of success in webcomics. Meanwhile, in old fashioned newspaper comics, Jim Davis is pushing forty years of making Garfield.

Mr. Green, in many ways, credits the web for making his transition possible, especially new platforms like Kickstarter and Patreon, as he explains below.

This Gunshow strip is my all time favorite, but this one is the one that gets stolen the most often.

The interview below was conducted over email. It has been edited for length and clarity.

Why did you end Gunshow?

I wanted a change in my creative life and just felt done. Time to move on. Simple as that.

Pinocchio was sort of its own weird thing I started while still doing Gunshow. He is a Good Boy (before that title, it was called “Seed”) was permeating in my head more around the time I was getting tired of Gunshow. Or just wanted a change.

“It’s more scary when you just started it and it’s slowly or not at all gaining traction. Then you start to wonder if you made the right choice.”

Change is scary and, yeah, it takes people a while to get into a new thing after your old thing that’s been around longer, but when I was about to quit Gunshow, I felt nothing big towards it. I felt happy to be done with it. I was more happy to be possibly working on a new thing. Try and make the new thing work.

It’s more scary when you just started it, and it’s slowly or not at all gaining traction. Then you start to wonder if you made the right choice. But with Patreon, people put their faith in you, not just the one comic, which I made clear in my Patreon video.

Ultimately, I wanted to challenge myself, and I wasn’t going to do that sticking with Gunshow.

What made the difference for you to be able to move into the world of comics full time?

Getting paid better and more often than any day job I held. Also having the desire to move to being full time helps. I lost it for a while, then found it again.

You have backed a load of other Kickstarters. Not everyone who runs Kickstarters backs a lot of them. Why have you backed so many? What’s really stood out for your from projects you’ve backed?

Because I want to see the projects I backed become real things and I like/believe in the people behind them. Also, a lot of them are games I personally want to play too, so there’s a bigger desire to back a game Kickstarter. And yeah, there are plenty doing good out there.

A great Kickstarter was Kris Straub’s Broodhollow. I backed Book 1 but missed Book 2 (it still made it, and I want to get a copy). Knowing Kris for a while, I knew how into horror he was, and that he started Broodhollow was like “Dude, finally.”

He’s done great work before with his other Starslip and Chainsawsuit, but this is his Good Shit to me, as I am very into horror as well.

How would you describe the essential Gunshow joke or approach to humor?

I don’t know how to answer the essential Gunshow joke. That’s not for me to say, I guess. I’m too in it to look outside-in and “get it.” My approach to humor is weird. Finding the odd thing that connects us in the weird, small or unknown.

I’m not much of an outgoing boy, but I like to make people laugh, so I try to figure it out through my humor.

What do you mean by your weird approach to humor? Can you give us some of your philosophy of humor?

“My approach to humor is weird. Finding the odd thing that connects us in the weird, small or unknown.”

Timing always gets me with humor. There’s nothing philosophical about that. If a gag is timed well within its given medium, I might get light-headed laughing so bad at it. I think about that a lot.

I also take in a lot of jokes and stuff from Twitter, TV, comics, etc., so I seem over-stimulated, but I also notice when things get done to death. I am just more aware of the overused.

So I try to find a different way of looking at it that at least makes me smile or think “that’s good.” Or, on the flip side, I make it obvious that I am aware of the cliché and make fun of that.  That can get tiresome at times, if you  overstay the welcome.

I approach humor by being aware of what’s out there and being done. Always watching and thinking. It’s certainly not for everyone, and I don’t hold it against anyone who actually wants to live a life.

Webcomics are kind of adamantly all standalone sites. The revenue model doesn’t seem to have moved much in years. Why is that? Do you see any shifts happening there?

I don’t know much about what revenue models my peers use or their standalone stuff. I know a lot of people have success and failures with ads on the site and stores that sell merch that they operate themselves sometimes.

Kickstarter and Patreon have helped shift a lot in that we don’t have to rely so much on the old ways (ads and merch) and just focus on what it is our fans enjoy from us. Those are the two big shifts that have taken place and seem to be going strong.

Patreon lets creators focus on the stuff that matters to the creators rather than trying to pull other gigs to make ends meet. It’s basically donations, but in a monthly recurring way that people don’t always have to worry about.

It helps a lot! It gives people a salary of sorts. It basically pays my rent and utilities each month, which I am not complaining about. I am grateful that people are helping me out in this way. I’m sure everyone on it is too.

What are you going for with He Is A Good Boy and BACK?

“The story I want to tell is kind of dark, but ultimately goofy. Everyone is serious, it’s the end of the world, and there’s a clown following our heroes. There’s a character named Pee Boy.”

To tell the story I want to tell? BACK has a straightforward story that I’m trying to keep vaguely all-ages.

I don’t know if kids read it and I’m def. not marketing it towards kids, but I think kids could and parents wouldn’t mind. I think! I’m not thinking of the audience when I write, I’m thinking of the story.

The story I want to tell is kind of dark, but ultimately goofy. Everyone is serious, it’s the end of the world, and there’s a clown following our heroes. There’s a character named Pee Boy.

HiaGB has a story, but also at its core it’s a vehicle to tell darker, absurd stories within its overall narrative.

Kind of like Tim and Eric Awesome Show Great Job to Tim and Eric’s Bedtime Stories, if you have seen them and understand where I’m coming from.

I think one of the things I have always enjoyed about your comics is that a lot of times the undercurrent is “We are all alone and you can’t trust anyone but that’s funny right?”

I think the word you’re looking for is “depression,” and, yeah, a lot of readers respond to that feeling of laughing at your perceived hopelessness and just feeling like shit on any given day. It makes things interesting!

Depression and Giving Up are common tropes I visit, but there’s also moments of feeling good. So, sometimes I make a simple friendly comic that has no real big joke, I guess, and just is nice.

Has anything happened in web or comics technology that you think might be important for advancing the form and/or the business? Like new apps? New tools? etc.

Manga Studio is great for what I do. It’s a program that is geared towards making comics, and I use it almost exclusively for my work. I still enjoy some Adobe products and I know photoshop like the back of my hand, but Manga Studio is more in tune to comics work and I love it for that.

I did draw on paper before, but in the past three or four years, I’ve stuck with digital only. It’s quicker for me. 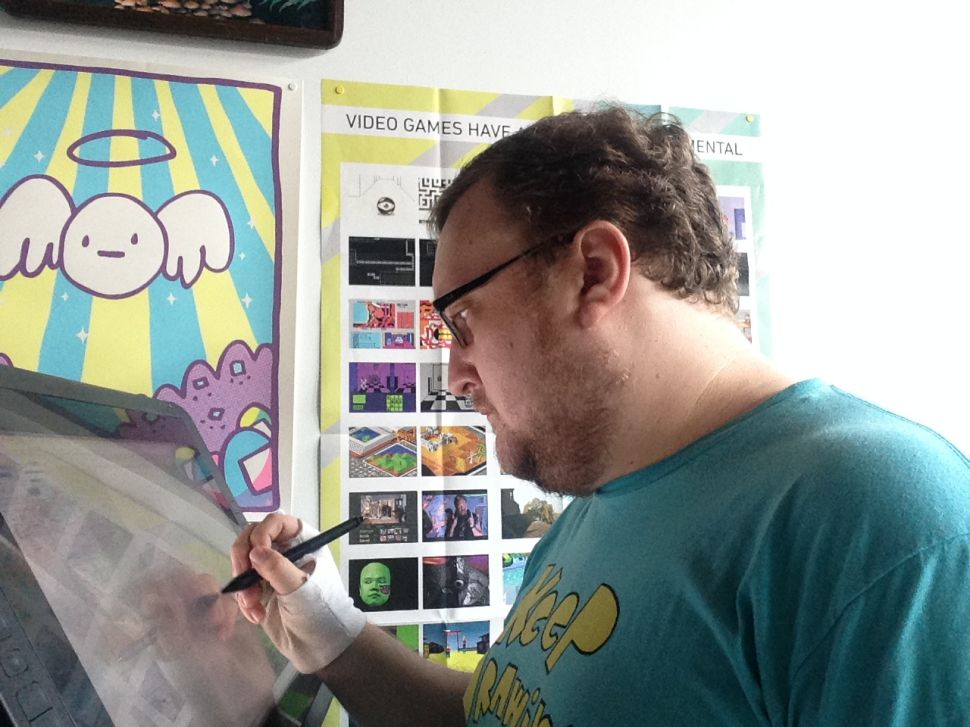