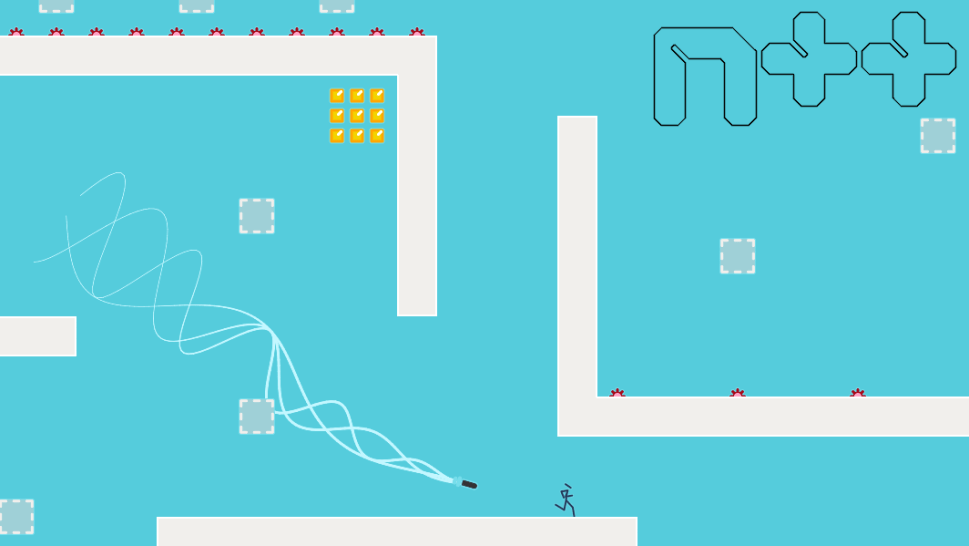 Rockets are one of the more banal threats in the new puzzle, adventure game, N++. (Image: Metanet)

The best part about playing N, for me, was always dying. What was great, see, was when your character would hit one of the mines and explode; it’s stick figure body parts would go shooting across the screen in every direction. If your arm, say, hit another mine, that mine would explode, too. Oftentimes, your body would hit a mine, explode into a half-dozen pieces that shot all over the screen setting off a brief cascade of explosions.

Dying should always be so fun.

I played the original N at IndieCade East in Queens back in 2014. The tiny team at Metanet, the company that brought us the games first two versions, N and N+, and has now released the most ambitious version to date, N++. With 2,360 stages, the company has given you a lot more ways to die.

Mare Sheppard and Raigan Burns, the Metanet cofounders, gave an AMA on Product Hunt Tuesday. They described dramatically increased power for the game’s graphics, so dying may be more satisfying than ever, here at the trilogy’s end.

Quickly: in all of the N games, you play as a ninja stick figure. Your goal is to move through a hostile space, avoiding a multitude of perils. It’s extremely simple in look and feel—highly abstracted. It’s more of a puzzle game but with a mechanic that feels a lot like an adventure game. Players can run, jump, decelerate, somewhat control themselves mid-fight and somewhat stick to vertical surfaces.

Here’s some of the standout points that the team made about the games last iteration in their AMA:

If you’ve been dissatisfied with your simulated deaths lately, N++ could teach you to love violent annhilation all over again.

UPDATED 8/3/15 10:55 a.m.: This story has been updated with additional comment from Mare Sheppard.