Retired New Jersey State Trooper David Jones wants to talk about the issues. If you sit down with him in a coffee shop in Middlesex County, he avidly discusses the pension system and property taxes and left to his own devices might comfortably stay on those subjects. But ask the 14th Legislative District Republican challenger about the contest in its most raw political terms and Jones also doesn’t mind – figuratively not literally – belting incumbent Assemblyman Dan Benson (D-14) in the mouth.

It’s the progressive Benson and not labor leader Assemblyman Wayne DeAngelo (D-14) that Jones seeks to pull into a street fight in this usually battleground district defined in Hamilton by a history of street by street, house by house retail politics.

“I am calling on Benson specifically,” Jones told PolitickerNJ yesterday afternoon. “As I go door to door, Benson comes up repeatedly as the one not doing enough for the citizens of the district. I am specifically going to be calling on Benson to come up with solutions of his own. Why is that Benson and the Democrats have not addressed the pension and property tax crisis?

“Dan Benson has done nothing of significance,” added Jones. “What has he done? I’ve knocked on 1,000 doors so far and no one can answer that question.”

The President of the Central Labor Council for the Building Trades and Assistant Business Manager of the IBEW, DeAngelo’s name never comes up. The district’s top legislative vote-getter from Hamilton appears headed for an election – if Jones is to be taken at his word and a super PAC somewhere doesn’t independently decide to make him the issue – where he gets nary a hair ruffled.

Both DeAngelo and Benson are not taking the cycle for granted despite the lack of attention and recent history.

“Wayne and I run as a team,” Benson told PolitickerNJ. “We work very hard and we will continue to be responsive to the people’s needs. We’re focused. Wayne and I have been going out to a lot of community events and we’re getting a very positive reception.”

Insiders insist that whether it’s Benson or DeAngelo, it won’t matter. A once competitive 14th no longer has the lustrous battleground quality it had pre-Christie when Republicans like Pete Inverso and Bill Baroni won with pro-labor support. All the insider talk heading toward the general election concerns LD1, 2 and 14.

But Jones, an unsuccessful 2014 GOP candidate for Mercer sheriff, says the insiders have that wrong.

There’s a local election in Hamilton, the largest town in the district, and popular Republican incumbent Mayor Kelly Yaede is on the ballot. But it’s a sophisticated split ticket voting town, has been for years, Democrats counter. Then there’s Monroe, another key municipality in the 14th, where Democratic Council President Gerald Tamburro is running to succeed retiring Mayor Richard Pucci. Democrats say Pucci built enough infrastructure to protect Tamburro’s bid. Jones, for his part, sees an opportunity to make inroads.

Retired two years ago as a major form the state police, in uniform for 13 years during his career and in detective street clothes for 14 years, the Republican challenger from Robbinsville notes that he is not anti-labor. He’s pro labor, he says, and pro-taxpayer. “I would never do anything to harm the current employees in the system,” Jones told PolitickerNJ.He just wants to fix the pension problem. He’s not surprised the pension overhaul struck by Gov. Chris Christie and Senate President Steve Sweeney (D-3) proved unsustainable.  He notes that he differs completely from Christie on a pension plan, which in his case would not include the creation of a hybrid of new and old public sector employees. He doesn’t want to alter the pension contributions of those already in the system. But he does want a constitutional amendment to cap new members at $100,000.

Jones says his command staff background at the state police gives him problem solving skills and the ability to tackle difficult issues like the pension crisis – a skill set he argues that Benson simply lacks. Targeting his property tax reform piece, he said he agrees 100% with state Senator Mike Doherty (R-23) on the issue of fair school funding reform, and agrees with Christie, whose administration this week released its position, on equipping law enforcement officials with body cameras to minimize the potential for police abuses. He is bullish on preventing the Supreme Court from legislating from the bench and opposes the Abbott Decision.

Jones had his first fundraiser in June in Hamilton and so far has raised over $30,000 toward his campaign bid. He wants to get to $100,000. “He’s working very hard,” said Assembly Minority Leader Jon Bramnick (R-21).

“The district is in play,” argued Jones, who has enlisted the aid of Middlesex County GOP operative Brian Hackett as his campaign consultant.

He’s on the GOP ballot with Phil Kauffman of Monroe. The two of them are not especially running a coordinated effort only because Jones says he has more time to devote to the trail and is approaching this contest to do nothing other than win, but he doesn’t describe his campaign as solitary by any measure. “I just need to get my message out there,” he said. 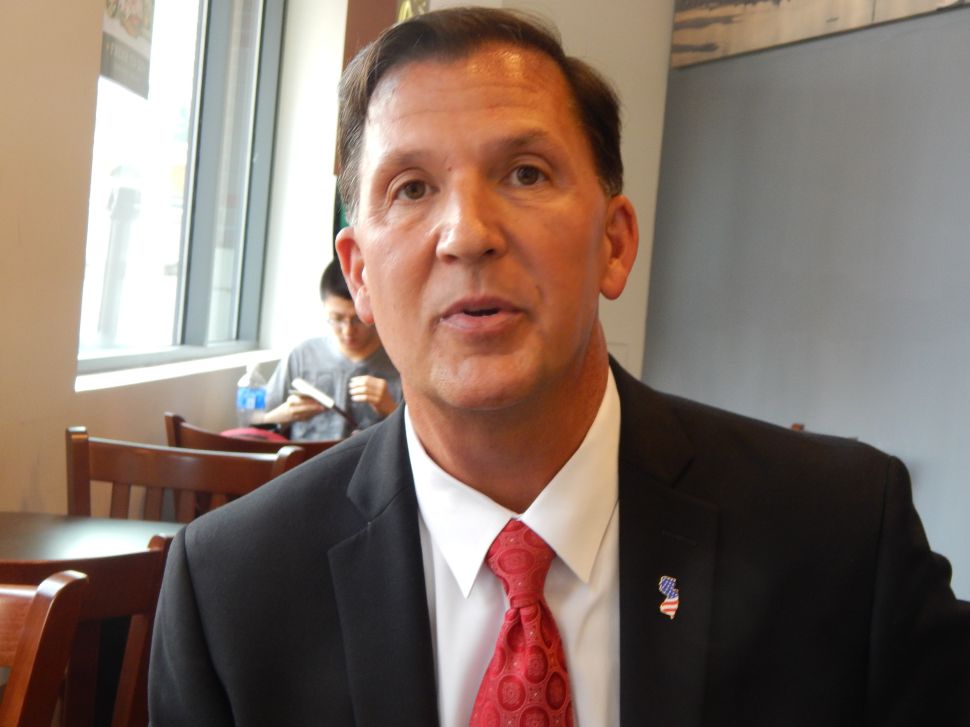