BRICK—There are four or five Democrats currently jockeying to replace Gov. Chris Christie when he leaves office. One of them, Senator Raymond Lesniak (D-20), recently threw a party at his Jersey shore-house to celebrate the Supreme Court’s decision to legalize gay marriage. The ruling, while not terribly surprising, is a watershed moment for New Jersey’s LGBT community, many of whom were on hand to toast the historic verdict with Lesniak, his partner Salena Carroll, friends and allies.
Turning Out Your Base
In a Democratic Primary, when identity politics becomes bloodsport, the LGBT community is a much-coveted prize in terms of endorsements, grassroots energy, and (especially) campaign cash. And partygoers weren’t about to let the assembled crowd forget which candidate has been with the gays the whole time.
“Raymond was with us all the way,” said Kim Otto of Garden State Equality. “Where better to celebrate than alongside our most reliable allies, Sen. Loretta Weinberg (also on hand) and Sen. Lesniak? Raymond was always on the right side of history with his consistent support of progressive issues. His advocacy was a catalyst for others in our legislature to evolve.”
This, presumably in contrast to fellow rumored gubernatorial wannabes, Sen. Steve Sweeney, Jersey City Mayor Steve Fulop, and Ambassador Phil Murphy. No disrespect to Lesniak’s’ would-be rivals, but on issues of LGBT equality, Lesniak’s record is peerless. They may be good, but Lesniak is better. And in a four-way, low-turnout Democratic primary, that’s a really big deal.
The campaign ad practically writes itself:

“One candidate stood with NJ’s LGBT community long before it was cool! Back when Mayor Fulop was in middle school, Lesniak was codifying LGBT equality into law. When Sen. Sweeney (twice!) declined a YES vote for gay marriage, Ray Lesniak was pushing marriage equality through the Senate. And when Phil Murphy was eavesdropping on German Chancellor Angela Merkel, Ray Lesniak was passing the strongest anti-bulling laws in America. Raymond Lesniak progressive for Governor.” [Cue “Born This Way” by Lady Gaga and imagery of attractive lesbian couple with mixed-race baby strolling the Jersey Shore at sunset]

Who Gets the Line?
There’s only one thing more important than actual principles in a New Jersey primary: the much-coveted party line on the ballot. Whoever gets it almost always wins that particular county.
Maybe it’s those tea leaves (or maybe coincidence) but Mercer County (pop. 377,000) was extremely well-represented chez Lesniak.
Assemblymen Reed Gusciora and Dan Benson were on hand. They’re both among the most progressive legislators in NJ and also happen to represent Mercer’s largest cities (Trenton and Hamilton, respectively.)
“Lesniak is running for Governor,” stated Gusciora as though it were as obvious as the nose on my face.
“And he should be taken seriously,” added Benson.
Jeannine LaRue, the grande dame of Mercer Democratic politics also held court. In addition to toasting equality, it was her birthday. LaRue, a long-time equality maven could have celebrated her special day anywhere she wanted. But she choose to spend it with us because equality and longevity go very together.
Rounding out the Mercer juggernaut was mega-lobbist Mike Murphy whose brother (Mercer County executive Brian Hughes) ultimately chooses which democrat gets that whole ballot placement thing I was talking about.
The vote to choose which democrat might replace Chris Christie is nearly two years away. And a bunch of Mercer people showing up at Lesniak’s to mark this historic occasion could all just be random. But the optics strongly suggest Mercer is lining up behind Ray Lesniak’s run for governor at this point.
“Full Circle”
No matter how the battle to replace Gov. Chris Christie ultimately shakes out, Lesniak’s place in Garden State gay history is secure. And if he manages a primary victory, it’ll be on those rock-solid progressive bona fides. After all, he lacks the kind of regional support of Sweeney or Murphy’s immense personal wealth. Or even the population demographics which favor Fulop.
Given those obstacles, Lesniak should be courting liberal Democrats every chance he gets. And if he needed political cover to throw a big gay beach party, the Supreme Court’s YES ruling gave him just that. It seemed fitting, especially watching Lesniak hoist the rainbow flag to fly beneath Old Glory all Independence Day weekend.
“Marking history at Sen. Lesniak’s home closes the circle on our struggle for marriage equality,” said Marsha Shapiro, who along with wife Louise Walpin were the first gay couple to be married in New Jersey (in Senator Lesniak’s home to boot.)
“Raymond, along with Loretta Weinberg were the original champions for marriage equality in NJ. Watching the American- and rainbow flags fly together brought tears to our eyes. We couldn’t have dreamed of a more perfect way to celebrate the Fourth of July Weekend. We are free at last!”
Jay Lassiter is New Jersey’s original State House blogger. Best known for his work reforming our Nation’s marijuana laws. Jay’s latest adventure was a trip to Ireland to campaign for the (winning) Marriage Equality referendum. He’s on Twitter @Jay_Lass. 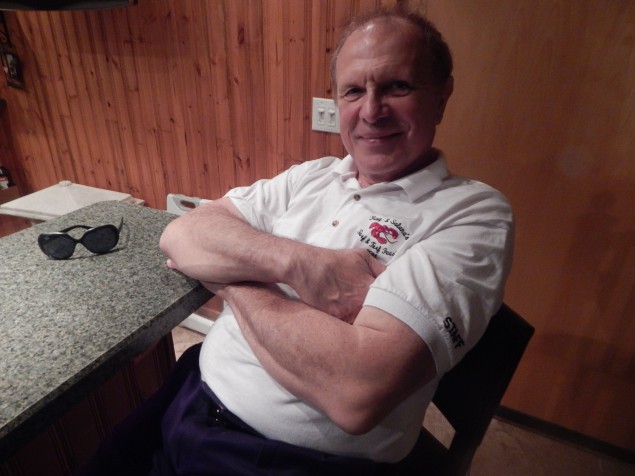