Public Advocate Letitia James and advocates today filed a class action lawsuit in federal court against the New York City Administration for Children Services and the New York State Office of Children and Family Services, accusing them of “causing irreparable harm” to the 11,000 children in the city’s foster care system.

“Too many of these children are suffering physical, emotional and sexual abuse because the system is failing them,” Ms. James said at a press conference outside the federal courthouse in lower Manhattan this morning. “Children living in New York City under these deplorable conditions spend over twice as long in foster care as children in the rest of the country.”

The suit, filed with ten foster children, alleges that children face harm in foster care as a result of both ACS and OCFS failing to properly address “structural deficiencies” in the city’s child welfare system. Ms. James noted that day-to-day foster care is handled by 25 different agencies, but that often ACS does not have jurisdiction to oversee those agencies.

The system, she said, is failing to reunite families, to place children with family members who could foster them, to keep siblings together, and to create permanent plans for children. Case workers aren’t adequately trained, she said, and attorneys aren’t ready—resulting in adjournment after adjournment in court, putting off the prospect of adoptions and normalcy for children.

At her press conference, Ms. James rattled off cases cited in her suit, using pseudonyms for the children. Tyrone, 7, came to foster care with severe dental problems and sleeping in his clothing every night because nobody had taught him to change into pajamas. Anne Marie, 4, saw her sister abused in foster care—and after ACS was notified, Ms. James said, they did nothing “except heavily medicate Anne Marie to deal with her trauma.” An infant, Damien, was removed from his abusive mother at 9 days old and has spent all of his four years in foster care—but now has a foster mom who is ready to adopt him.

“Unfortunately, their case has been adjourned constantly in family court,” Ms. James said.

After a string of tragic deaths of children in foster care, the city has undertaken measures to reform ACS— including a $6.5 million department staffed by retired detectives aimed at ensuring children safety. But Ms. James said that while ACS Commissioner Gladys Carrión had her heart in the right place, children couldn’t wait for reforms.

But ACS argued it is unfair to compare the city to other jurisdictions, because family court must approve of any action ACS takes, dragging out the process, and because parents and children in foster care cases in New York all have attorneys—which is not the case elsewhere. The agency also noted many children are in foster care at the request of their own parent.

“The de Blasio administration is deeply invested in improving the lives of vulnerable children, and working very closely with many partners to improve our foster care placement system. The City has made great strides in reducing the number of children in foster care from a high of 45,000 in the 1990s, to just over 11,000 currently, and in the last 18 months ACS has taken significant steps in preventive work designed to keep families together and avoid placing children in foster care in the first place,” the agency said in a statement provided by spokesman Christopher McKniff. “We are committed to working with our partners throughout the system—the courts, attorneys, advocates, providers, parents and children to ensure we continue to improve outcomes for families who are involved in the child welfare system.”

The lawsuit was also met with some other detractors.Tamara Steckler, the attorney-in-charge of the Juvenile Rights Practice of The Legal Aid Society, which often faces ACS in court as an adversary, said the suit was “short-sighted” and that its lead attorney, Marcia Robinson Lowry, did not have experience representing children in the foster care system.

“The filing of this lawsuit is short-sighted. As the organization that represents almost all the children in New York City foster care, we have been working very closely with the current commissioner to improve outcomes. This lawsuit is being brought by attorneys who have never represented clients in New York City’s foster care system, yet purport to know how to fix it, at a time when foster care numbers are at an all-time low and collaboration is at an all-time high,” Ms. Steckler said. “We are concerned that this development may stall the progress being made by those of us actually working with these families and children to improve the foster care system.”

A source in Ms. James’ office argued that it was factually incorrect to assert Ms. Robinson Lowry had not represented clients in the city’s foster care system. They pointed to five lawsuits in which Ms. Robinson Lowry sued the city or its foster system on behalf of children—all of which sought to change laws or obtain damages from the city, sometimes in a class action, over the city’s actions in foster care cases. 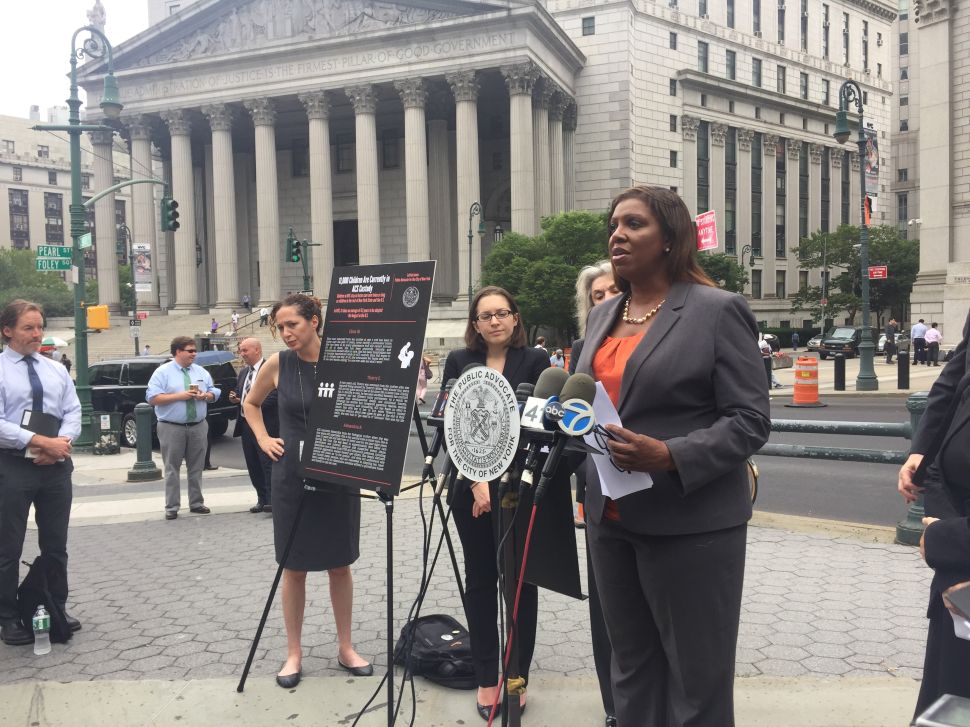