In an apocalyptic opinion piece for the New York Post, Mr. Podhoretz goes into panic mode about three very bad things he saw recently on the Upper West Side, which remind him of a “pre-Giuliani” era:

Because Mr. Podhoretz, the editor of Commentary magazine, clearly understands the first law of journalistic dynamics, which states that three mildly similar things constitute a trend, he declares that civil society in New York as we know it is “decaying.”

“I’m not offering an explanation for why this has happened,” Mr. Podhoretz writes. “I’m only describing a change in mood.”

He then goes on to suggest that Mayor Bill de Blasio may be responsible for what Mr. Podhoretz perceives to be the end of times. Even though the empty storefronts and growing homeless population (or people who, like the ice cream man, could be homeless) that so repulse Mr. Podhoretz would seem, at least on the face of it, to stem from Mr. de Blasio’s bête noir: income inequality. (Mr. Podhoretz admits that the empty storefronts, at least, are the result of greedy landlords who drove out the previous tenants.)

In his next column, perhaps Mr. Podhoretz could look inside himself and consider the tension that occurs as the result of vast inequality in a city whose homeless population is the highest since the Great Depression.

But that’s not the New York Post’s line, is it? 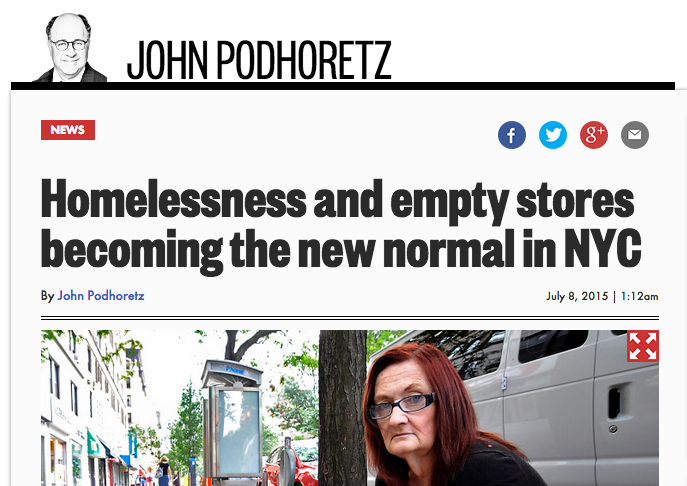