This is the first installment in an occasional series we’re calling Aptonym Alert. An aptonym—also known, for some reason, as an aptronym or a euonym—is, according to the Oxford English Dictionary, “a name regarded as humorously appropriate for its owner.”

And sometimes aptonyms are worth pointing out. (Jim Romenesko used to do this kind of stuff, but now that he’s “retired” to tweeting and the occasional memo leak, it’s unlikely he’ll continue to seek them out.) Noteworthy aptonyms we’ve noticed recently include Michael Wines, a reporter at the Times who wrote about a bloody vineyard dispute in France; the recently departed Don Featherstone, who invented the plastic pink flamingo; and Julie Weed, who’s on the marijuana beat at Forbes.

On Wednesday, Jacob Brogan wrote a piece for Slate about the agony and the ecstasy of grilling. Which would not have immediately qualified him for aptonymous status. But Mr. Brogan spent most of the essay worrying about “unintentional masculine cliché,” and we couldn’t help but wonder if the fact that he was perseverating over the bro-iness of cooking meat might have had something to do with his broey name.

“Gathered around the coals with beers slung low, we’re all but enacting a myth of the American man, telling a story in postures and poses,” Mr. Brogan wrote. “No longer mere Ph.D. students, we have become bros.”

This concludes the first installment of Aptonym Alert. 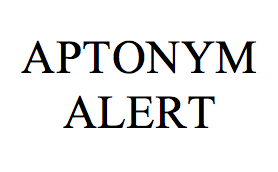