Despite oft-heated rhetoric surrounding immigration issues in the United States, Council Speaker Melissa Mark-Viverito said today she was still hoping other cities around the nation might follow New York’s lead in providing lawyers to undocumented children arriving in the country without their parents.

Ms. Mark-Viverito was standing with attorneys, advocates, and young children who had fled from violence in nations like El Salvador to New York. Thanks to a program she rolled out a year ago, those children—and all unaccompanied minors arriving in New York—are receiving legal help to allow them to fight deportation and apply for asylum based on the violence they ran from.

The speaker has worked to make immigration reform—locally and nationally—a central focus, and the struggle of undocumented children, which she deemed “heartbreaking” after a tour of court proceedings last year, has been a key issue where the city was able to take its own action without the federal government. Children without attorneys are much more likely to be deported, and before the program was launched, there was no guarantee of legal representation.

Ms. Mark-Viverito has also knocked Republicans for comments about immigrants, most recently calling Donald Trump the GOP’s “head clown” for saying rapists and criminals were entering the U.S. illegally from Mexico. But she despite such comments, she thought New York’s efforts were already having influence in other cities.

“A lot of times voice is given, too much voice is given to those that hate,” Ms. Mark-Viverito said. “I don’t think that’s the overwhelming sentiment of this country.”

Ms. Mark-Viverito, who recently traveled to Phoenix to talk immigration and has vowed to energize Latino voters to make it an issue in the 2016 race, said she was looking into ways to help other municipalities understand how New York’s program was structured—spending $2.5 million in Council funds and leveraging partnerships with non-profit legal service providers and groups like the Robin Hood Foundation.

“There are other areas that do have an influx of unaccompanied minors and those children need help,” she said.

But in New York, the influx of unaccompanied minors has greatly slowed, she said, and there was no evidence immigrants would flock here to avail themselves of legal services.

“In terms of the surge that happened last year, we don’t see anything near that this year,” Ms. Mark-Viverito said.

Nonetheless, she said the program would remain active to deal with any additional unaccompanied children who do arrive—and to continue working on behalf of those already here.

Jojo Annobil, Attorney-in-Charge of the Immigration Law Unit, said the case of every child arriving in the United States was different—but dismissed the idea from some that they were arriving simply because of President Barack Obama’s executive order on immigration (on hold in the courts at the moment) or other U.S. policies. He said when someone is willing to jump onto a moving train and risk death to get here, it’s for a good reason. 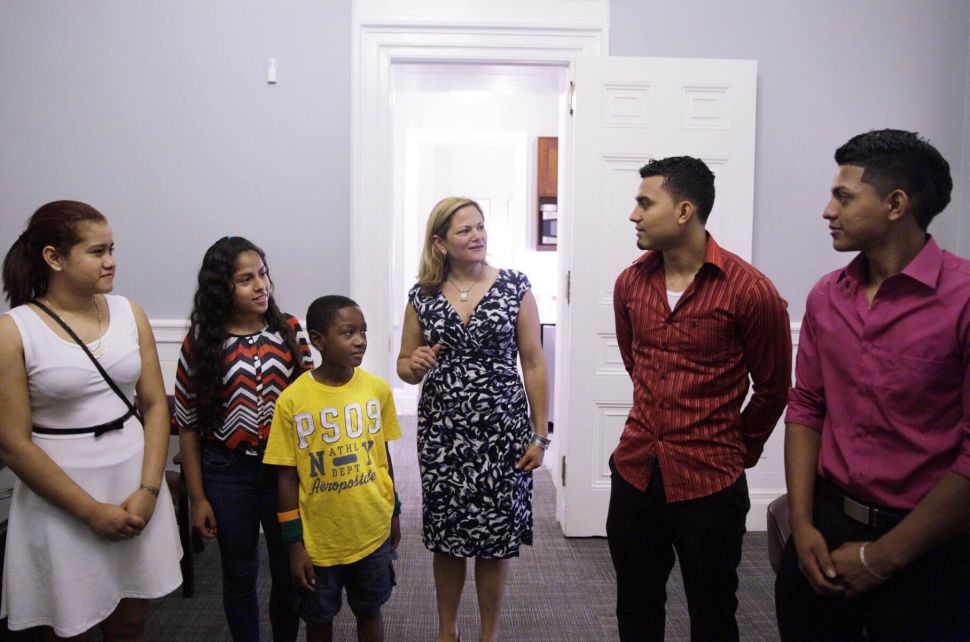