They say imitation is the sincerest form of flattery. Since about halfway through its second season, Masters of Sex has flattered its foundational figures by making bold leaps into the future — literally, rather than philosophically, in the form of time jumps. The biggest of these, of course, came in the transition from Season Two to Season Three, a span of nearly five years. (Though if you go by the age of Virginia’s inexplicably grown-up children, that’s a looooooooong five years.) But less dramatic fast-forwarding can be just as impactful. Take “Three’s a Crowd,” tonight’s episode, for example, in which a nine-month pregnancy is collapsed into a single hour of television. The proper response to this act of time travel is one of gratitude: Thank God that’s over with.

Precious little about the storyline that dominated tonight’s episode either plays to the show’s preexisting strengths or breaks new ground in going offroad. Finding out that she’s pregnant with a third child by ex-husband George causes problems for Virginia at work? You don’t say! It makes Bill, who’s jealous of their relationship and worried about appearances for his life’s work, uncomfortable, and Libby, who knows her husband will be fingered as the father by the public at large, even more so? Get out of town! There’s a plot point where it looks like she’ll get an abortion but the show, ahem, I mean she changes her mind at the last minute? Stop the press! Her newly troubled teenage daughter Tessa tells Virginia that her bad decisions disqualify her from delivering moralistic lectures by saying, in literally so many words, “You’re the last person who gets to lecture me on anything”? Well, I guess it’s a step forward from “You’re the worst mom ever,” an actual honest-to-god line from earlier in the episode! The birth is a screaming crying sweaty mess like every other birth that’s ever been shown on television? I could have a heart attack and die from not-surprise! It’s difficult to overstate how rote and uninteresting every aspect of the idea and the execution wound up being. The most you can say for it is that it only ate up one week of screentime.

And would you believe this was completely the writers’ choice? In reality, there was no narrowly avoided scandal that threatened to overshadow the release of Human Sexual Response, no shotgun re-marriage to George,  no third Johnson baby at all. Even on a show that plays so fast and loose with the facts in its historical fiction that it requires a disclaimer at the end of each episode stating that the child characters bear no resemblance to their real-life inspirations, the invention of a child out of whole cloth is something else. Masters has now done it not once but twice: Both Bill & Libby’s and Virginia & George’s third kids are completely made up, brought into this world by showrunner Michelle Ashford rather than the people the show is ostensibly about. Nothing Masters has done with these wholly optional additions so far has justified the investment.

Indeed, both the bogus baby boom and the sudden swerve into teen-drama territory have steered the series away from its primary points of appeal. Gini and Bill’s used to have chemistry to burn; now it’s tough to remember the last time a scene between them was enough to get any viewer hot and bothered. The labcoat eroticism of their sex study itself was, in the show’s early episodes, a long-overdue payoff on pay-cable’s potential to parlay Nudity and Strong Sexual Content into something as smart as it was smutty; now that element is completely absent. I dunno, maybe there are people out there who’d rather watch a show about hysterical women getting coached through contractions or arguing with their daughters about the borrowing the car, but Growing Pains is available on Amazon for just $1.99 an episode.

Fortunately, Masters has too much talent involved to deliver a completely stillborn episode. Mather Zickel has long been a lively presence as George Johnson, Gini’s boisterous but occasionally insightful ex, and his confrontation with Gini prior to their sham marriage airs out old grievances about her callous attitude toward him, her affair with Bill, her obsession with a project he finds troubling, and his own sense of inadequacy in a convincingly ugly way. On the flipside, Michael Sheen gets to display the awkward sense of humor he used so brilliantly in his unforgettable creepazoid cameo in HBO’s mockumentary 7 Days in Hell when he blusters his way through breaking the news to Libby that Virginia’s pregnant, and later when he tries to get Gini through painful contractions by singing “Danny Boy,” badly.

Finally, the writing starts taking real risks when, in a further attempt to comfort his crestfallen partner, Bill gives voice to the notion that full-time mothers do their kids a disservice by sacrificing their own goals, careers, and dreams on the altar of motherhood. “Oh, you poor things,” he imagines future generations saying to their homemaker forebears, “Look at how much more you could have been!” This echoes his earlier contention, to the wife of the Shah of Iran (don’t ask), that desire and respect form a truer bond between men and women than having a child together alone. These are harsh indictments or declarations of liberation, depending on how you look at them; Masters, to its credit, lets viewers decide for themselves. If it had stayed in this challenging mode instead of frog-marching characters and audience alike through bad family drama, that would have been a blessed event indeed. 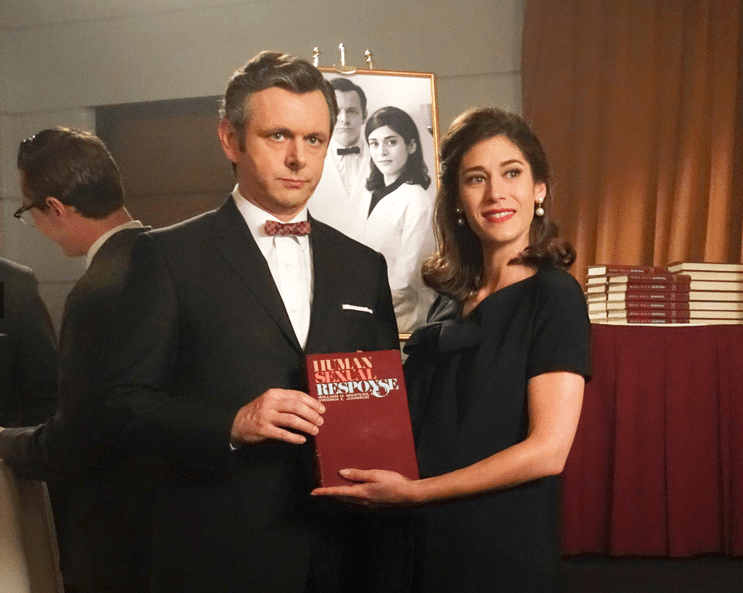