Masters of Sex, at its best, is a lot like Arizona: extremely dry and extremely hot. When it works it’s fueled by the R-rated Rosalind Russell vibes of Lizzy Caplan’s Virginia Johnson, the strength of its premise — a historical battle the eventual victor of which is obvious everywhere you look today — and its tasteful yet provocative clinical eroticism, which is another way to say it’s super fucking sexy to watch people fuck for science. When it doesn’t work it’s weighed down by its protagonist’s lack of charisma, its supporting cast’s ‘90s-network-drama two-dimensionality, its repetitive relationship dynamics, and its use of throwaway characters who exist simply to spout the prejudices and since-rejected conventional wisdom of the day. Tonight’s Season Three premiere, “Parliament of Owls,” most definitely did not work. What does this tell us? Let’s make like Masters & Johnson and observe & report.

Masters of Sex’s main problem is its title character. Bill Masters is a singularly unappealing figure, bold and forward-thinking about precisely one thing, his sex research project, and a drip in every other way. Imagine if Don Draper were just as good at advertising as ever but weren’t also charming, frequently kind, and unbelievably handsome, and you’ve pretty much got the good doctor covered. This makes a show about a small army of people who rearrange not just the entirety of their own lives but also science and society in general around the guy a tough sell indeed.

It’s not that Michael Sheen is bad in the role. On the contrary! Sheen’s skill in playing Masters as an asshole who oscillates between headache-inducing self-repression and volcanic rage renders him unpleasant to spend more than two minutes with at a time. And rather than enrich or complicate him, his backstory as a victim of child abuse is portrayed—well, in the clichéd and uninteresting way it was tonight, with Bill on the verge of socking his son in the jaw before getting ahold of himself like something out of a Very Special Episode of an ‘80s sitcom. (Or a Tim & Eric sketch.) It’s just not a character with the range to sustain a series, which is why so much of Masters winds up feeling like this:

VOICEOVER: Previously on Masters of Sex…

BILL: [visibly mangling own dick in a bicycle wheel] Wrong? Nothing is wrong. What could possibly be wrong?

BILL: [blood leaking from eyes, skin sloughing from torso, hair catching fire] There is not now, nor has there ever been, a single solitary thing wrong with anything, ever! Except the medical establishment!

So perhaps the best way to describe an episode based on the idea that Bill Masters can’t last on an idyllic summer vacation for more than two days before his presence drives everyone around him batshit insane is Masters of Sex steering into the skid. That doesn’t excuse the results, though — a melange of foregone conclusions. He and nature don’t get along. The randy teenage daughter gets drunk and hits on him. The truculent son recreates his father’s own patterns of defiance and abuse. Virginia and Bill’s wife Libby tapdance around his obvious infidelity, treating his long-running affair with his business partner and Libby’s closest friend like a hothouse flower. Shit, at one point he just stares up at the stars — insert profundity here! We’ve already gotten the message that Masters his a mess everywhere but the examination room. There’s no need at all to open a season by belaboring that point for an hour.

The episode’s other anchor points were equally mislaid. Libby Masters is an utterly thankless role, though Caitlin FitzGerald does as well with it as anyone could; her sole purpose, from the start, has been to be the odd woman out, and though her awareness of exactly what she’s been excluded from has grown over the course of the show’s two seasons and counting, her ability to articulate and address her unhappiness remains in the exact same place. And like Bill, she simply doesn’t have the charisma of, say, a Betty Draper or a Skyler White or a Carmela Soprano, women scorned but not defined by that scorn, characters with rich, demanding inner lives of their own. A Far from Heaven–style affair and a few mother’s-little-helpers to get her through the day don’t cut it. Her civil-rights-era-induced PTSD freakout when Libby’s son gets hit by a car and her out-of-character kiss with Johnson at the end of that night are the closest she’s come to throwing curveballs since the start of the show.

For her part, Virginia spends the hour bogged down in the least interesting aspects of her own character. Balancing a thriving career with a stalled education, a troubled family life, and an illicit romance, can she truly have it all? What a dull question! It presupposes that this struggle, not her autodidactic mastery of the work nor her magnetic sexual self-confidence, is the most interesting thing about her. But it’s a damned sight more interesting than the two plot twists she’s served with: her teen son enlisting and her cliffhanger pregnancy revelation. If I never see a show do that again it’ll be too soon, but the use of pregnancy as an all-purpose life-fucker-upper in a show about breaking free of shame and stereotypes about female sexuality is especially unforgivable.

Then there’s the Vietnam thing, part of Masters’ regrettable penchant for getting the audience on its side by introducing issues history has shown us in hindsight to be one-sided. Can the saga of Virginia’s son tell us anything about war, masculinity, and coming of age we don’t already know? Can a journalist who shouts moralistic boilerplate at a press conference for a book as famously seismic as Human Sexual Response be good for anything other than cheap-shot antagonism, or perhaps a last-minute reversal where he’s not such a bad guy after all? In a weak episode like this it hardly matters, but this stuff can do real damage: Think of how badly the boxing-match episode from Season Two, a potential masterpiece, was undermined by the irredeemable neanderthal father of the baby born with two sets of genitalia. Elements like these are the styrofoam packing peanuts of drama: They get the story where it needs to go in one piece, but all they really do is take up space before getting tossed in the garbage. I’d stake my reputation, Masters & Johnson–style, on the idea that the makers of Masters of Sex have it in them to do better. 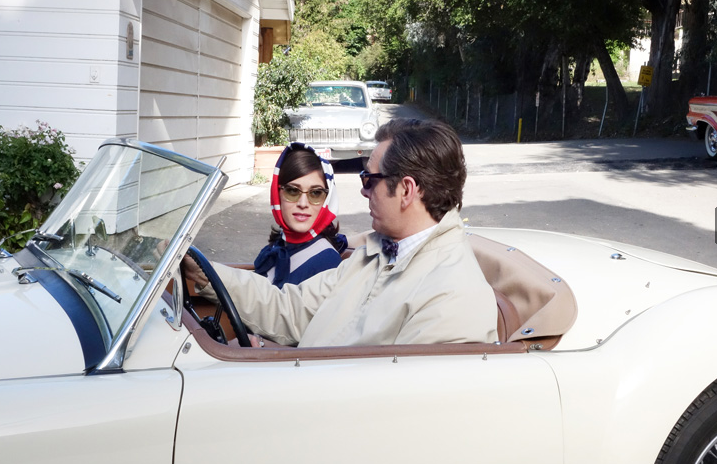