“New York, if you’re different we love you. Come!” Edward Tricomi, co-founder of the legendary Warren Tricomi salon, hollered over coffee in his salon at The Plaza Hotel. Mr. Tricomi believes that one year in the city is all it takes to become a New Yorker because to him, this is a city built on people’s differences.

Edward Tricomi and Joel Warren, both NYC natives, first collaborated with business guru Roxana Pintilie in the late 1980s; she is a third and equal partner and the driving force behind every facet of their salon business. Collectively, they debuted the first salon in midtown Manhattan in 1990, and in 2008 they opened their luxurious Plaza Hotel flagship location. Since before they opened their own salon, a celebrated clientele including Christie Brinkley, Jerry Hall, Cindy Crawford, Sarah Jessica Parker, Julianne Moore and Zoe Kravitz has passed through their mane-taming hands.

As for New York City, a town known for setting the trends, Mr. Warren told the Observer that there is no one “look.” “I’ve seen so many trends come and go, from short pixie haircuts to long hair and bobs. All the different varieties of hair from very curly to super-straight, make up the looks of this diverse city.” As for the different neighborhoods, he claims that looks vary from uptown to downtown, Brooklyn to queens. “If you’re on the Upper East Side you have one look and if you’re on the Lower East Side, you have a totally different one.” Despite the onslaught of celebrity looks upon the city, such as Jennifer Aniston’s “Rachel” hairdo from Friends, Mr. Warren maintained, “New Yorkers love to be unique. There is never one trend, really.”

The duo continues to develop and understand their markets. “The Japanese are so into hair color,” Mr Warren said, after the duo recently opened a salon in Tokyo. “They feel like they look alike and the one thing that can distinguish them from one another is by changing their hair color, so you tend to see more of the blues, purples and greens.”

When it comes to inspiration, Mr. Tricomi recalled his start as a session hairdresser on fashion shoots. “When I started my career I worked with a lot of French photographers, so I was always back and forth to France. The photographers I worked with really inspired me. A city is nothing but buildings; the people make a city.”  Mr. Tricomi’s first roommate in Manhattan was Janice Dickinson, who provided a classic introduction to the big city when he was only 18 years old. He recalled fighting with her for the shower every morning on his way out to work with Polly Mellen and Vogue. He went on to work with Valentino, Helmut Newton, Avedon, Irving Penn and Lou Turbeville.

As a kid, Mr. Tricomi always dreamed of owning a piece of the city and years later he views his achievements in that respect with pride. “The icons in New York City are the Empire State Building, Chrysler Building, Statue of Liberty, and then there’s the Plaza Hotel. It’s pretty incredible to have a salon in such an iconic building here.”

“I was dating a hairdresser while finishing beauty school in Upstate New York. One day she said, ‘We have to go to New York City  to get a job!’  We drove into the city in an orange beach buggy and then went up and down 57th street until I found a salon, ran in and asked for a job. Just as quickly as I got the job, I lost it. Then I walked into La Coupe and they hired me on the spot. That was where I really started learning, under Louis Licari.”

As for becoming a New Yorker, Mr. Warren claims it takes two years, but Mr. Tricomi stuck to one. He said, “You can be in France for eight years and they won’t invite you to a dinner party. After about a year, New York really lets you in.” 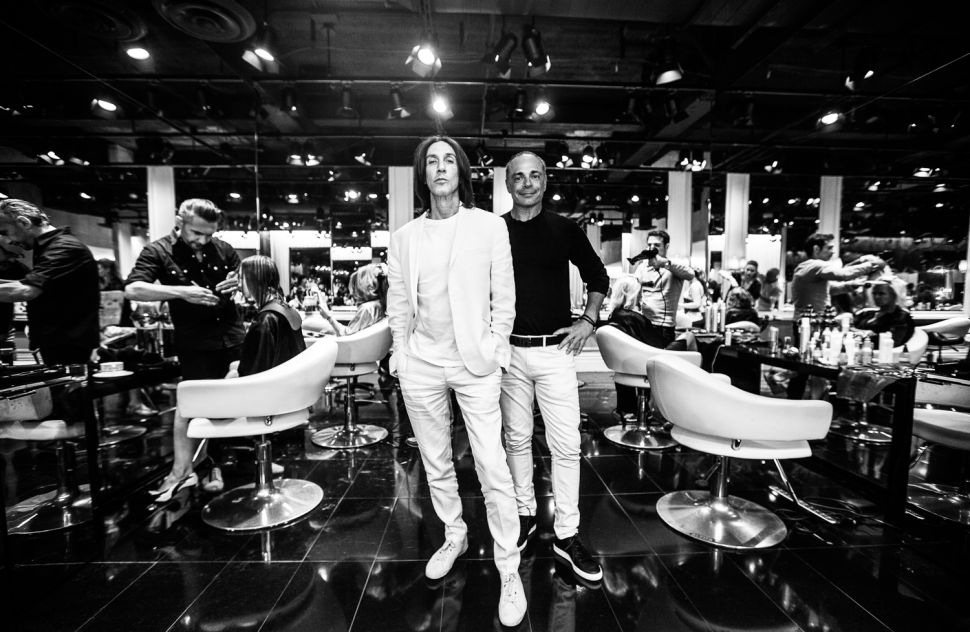