On the second floor of Industria Studios, tucked away in Studio 4, a cluster of models sulked in front of vertical stripes of blue fluorescent light. They looked blissfully unaffected, as swarms of amateur and professional photographers tried to capture the perfect ratio of tousled hair, fitted blazers, colorful sneakers and of course, rows of blue lights.

The creative behind this particular show at New York Fashion Week: Men’s is Carlos Garciavelez, who was there to debut his second-ever menswear collection. With a name borrowed from the designer’s last name, the line offered a healthy mix of athletic-inspired sweatshirts, finely tailored shorts and playful versions of button-downs. In hues of navy blue, interspersed with shocks of neon orange and gradients of bright green, this Spring/Summer collection focuses in on the concept of light, something that Mr. Garciavelez – who is also an architect and an urbanist – knows plenty about.

The show notes that accompany Mr. Garciavelez’s collection explain that he ties his designs back to four core ideas: reflecting, concealing, diffusing and capturing the ephemeral qualities of light. It also mentions two art installations he was inspired by, Dan Flavin’s fluorescent creations and Donald Judd’s 100 pieces of untitled work, both of which were curated by the Chinati Foundation, in Marfa, Texas. As if that’s not impressive enough, it turns out that this designer also dedicates his part of his weekdays to Harvard, where he lectures architecture students. Seeing as he is a busy guy, we took exactly two minutes to chat with this designer who fully deserves his up-and-coming title.

What’s the story behind your Spring/Summer 2016 collection?
The idea of this collection is the idea of light, so the ephemerality of light and how to capture that in clothing. Some of the pieces are a bit more playful and some of them are dark. But it’s really this idea of clothing that will perform with you, across the day, that has little sparks of light. Some of the linings are really bright and if you peek around you’ll capture these little details. I like to ask, how can you play with color in your life? And how much can you add? That’s where the color came about.

Do you think New Yorkers, who love to wear black, will embrace this collection?
I actually think this is a good New York collection. When you go out in the morning, you go to SoulCycle, then to work, and then at night you go out to a dinner. This is the clothing that will perform with you throughout the day, up until the end of the day.

And what about the shoes?
We collaborated with Diemme, to make printed shoes with the same idea of gradients and light.

Aside from designing your men’s collection, what do you do?
I’m in architecture, well I do academia now; I teach at Harvard twice a week and I commute to come back and work on [this].

Do you ever find inspiration from the students that you are teaching?
Oh, completely! I think it’s a place where I develop my best work through the dialogue with [the students] and their projects. And then I ask: ‘How do I translate that into my own?’

How did you approach casting this show?
The casting is a broad spectrum of reality and multiplicity. We cast guys with very long hair and girls with very short hair. It goes back to my original idea of blurring the light, conceptually.

So technically, is this a unisex collection?
No, but it will eventually move to that. This season is about the idea that women can wear menswear and still look cool. 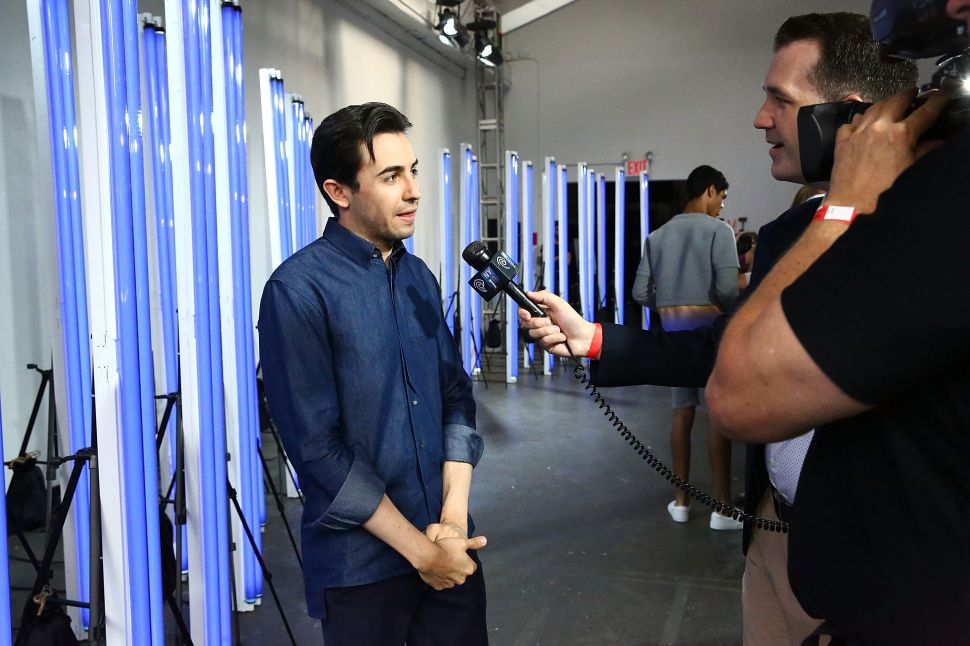