SpaceVR’s product, the Overview One, will bring space into the emerging virtual reality market (SpaceVR)

At some point in our lives, we briefly aspire to the idea of “hanging in the void” of space and realizing first-hand, Earth’s role among the stars. That kind of wonder and dramatic change in perspective may soon become accessible to all mankind via San Francisco startup, SpaceVR.

The company aims to bring live, 360 degree, 3D video to the consumer market from the International Space Station and beyond. Their virtual-reality camera, the Overview One, will be mounted aboard the space station to provide you with an ‘inspiring’ effect only previously experienced by Astronauts.

SpaceVR’s philosophy is inspired by Carl Sagan’s “Pale Blue Dot” and Apollo Astronaut Edgar Mitchell’s “Overview effect.” Combined, they form a vision of what the product should ultimately deliver to the consumer: A shift in thinking. They want Earth’s political boundaries and conflicts to disappear for users immersed in their content, while helping them realize the urgent need to protect it.

During NASA’s last cargo launch to the ISS from Kennedy Space Center, I ran into SpaceVR’s founder, CEO and chief product architect Ryan Holmes who was accompanied by the startup’s Director of Business Development, Kelley Holmes. They presented a prototype of the Overview one, which is six pairs of modified GoPro cameras mounted onto a custom 3D-printed core. The team has already received the green-light from the only commercial laboratory operators and payload specialists on the space station, NanoRacks. 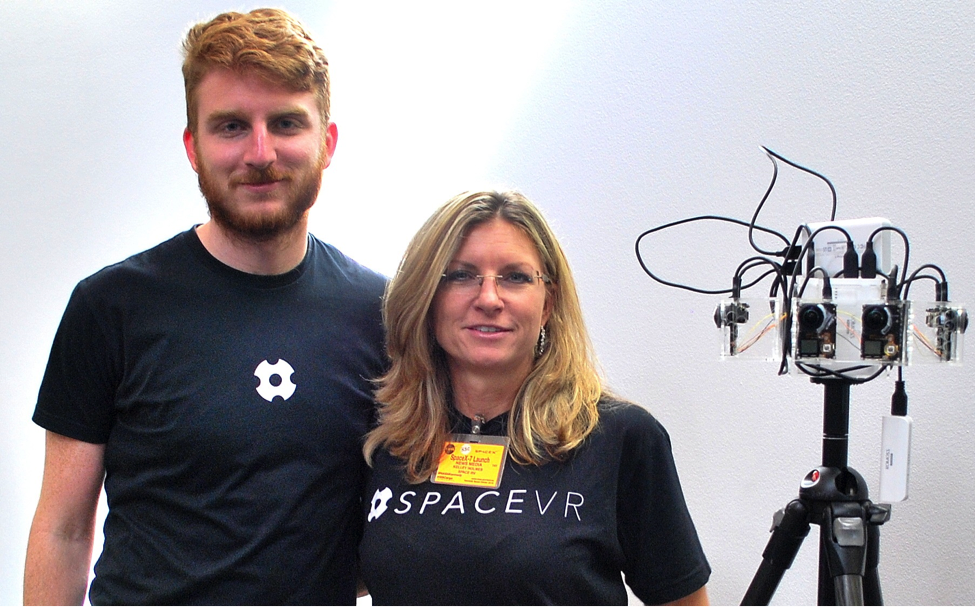 The SpaceVR team with the Overview One prototype at NASA Kennedy Space Center. (Robin Seemangal)

While the launch we attended ended with the explosion of SpaceX’s Dragon capsule, destroying all of its tech and supplies (Including Microsoft’s Hololens), SpaceVR’s team remained enthusiastic about getting their product to the ISS on a future cargo resupply run later this year. They’ve since attended the ISS Research & Development Conference where Ryan Holmes made an impromtu pitch to SpaceX CEO Elon Musk, who responded with intrigue and hope for Virtual Reality in space.

Following the event and while on the road to build buzz for the company’s upcoming crowdfunding effort, Holmes answered a few questions about SpaceVR and what the startup is hoping to accomplish.

1. What inspired you to create this project?

After watching the Overview documentary by Planetary Collective it was extremely clear that the most valuable thing to do for our society would be to bring everyone to space to see the earth. So my co-founder Isaac DeSouza, and I set about creating an affordable experience that we could share with the world through virtual reality. Currently more than 2 billion smartphones exist that are capable of being virtual reality players bringing up significantly the number of people who can experience the Overview effect from 536 to 2 billion in months. With current developers like Oculus, Fove, Valve, and Samsung among others we are also ready to deliver immersive and breathtaking experiences.

2. The first camera is called the Overview One. Is your products goal for customers to experience the ‘Overview’ effect?

Absolutely. Our initial mission is to bring the overview effect to one billion people. In addition to this the footage is valuable to all space agencies for training and Operations providing unique opportunities in space exploration. There is also opportunity for educational uses such as teaching kids geography of the planet by looking at it from space as well as STEM subjects. The potential is endless and we are creating new applications and content plans everyday.

3. How much will it cost them and through what mediums will they be able to experience the content?

A consumer program will feature access to the content for $10/month which includes all content and access to the live stream (when it’s setup). Along with special licensing options for educational and media applications.  Availability will be through all VR devices.

4. How far ahead is your vision for what SpaceVR can accomplish? Do you have a general timetable?

Our long term vision is to allow people to instantly interact with space in whatever ways possible. This is a new industry we hope to build called consumer space.

Our current timetable is to put the Overview One in the ISS in late 2015 and to expand into space walks, rocket launches,  re-entry VR spacecraft, and content basically anywhere there are space related activities. In 2016, we plan to upgrade to live transmissions. From there we have missions planned for the next decade where we will take our virtual reality  astronauts to beyond low earth orbit and into the moon, asteroids and Mars. Providing even extreme experiences like skydiving in Jupiter and direct control of spacecraft in LEO through virtual reality.

SpaceVR’s ambitious timeline for  where they envision their product to go over the next 11 years. (SpaceVR)

5. With your Kickstarter launching in a couple of weeks, how much is SpaceVR looking to raise  and what are some of the largest expenses for getting the Overview One to the ISS?

Our minimum goal is $500k, this will allow us to launch a basic camera and capture the minimum amount of content. The more funding we have the more amazing capabilities we’ll be able to build out, this includes upgrades for spacewalks, reentry, and our communications link.

6. Besides your quick pitch to SpaceX’s Elon Musk, have you received any response or feedback from NASA or related parties?

When we were communicating with Elon Musk, we had a booth at the International Space Station Research & Development Conference. Here we met and spoke with some amazing people at NASA and CASIS. They all reacted with overwhelming support for the project and have been very encouraging supporting the project in a more traditional manner.

A digital concept of how the Overview One will be mounted on the International Space Station. (SpaceVR)