After accusations of racism and cultural insensitivity, the Museum of Fine Arts in Boston has cancelled its “Kimono Wednesdays” program, the museum confirmed.

In honor of Claude Monet’s La Japonaise, one of the museum’s most celebrated pieces in its permanent collection, the MFA had organized an event where museum goers could try on traditional Japanese kimonos that replicate the one Monet’s wife dons in the painting and take photos, called “Kimono Wednesdays.” But not everybody thought a game of dress up in traditional garb was appropriate.

The impressionist piece highlights France’s infatuation with Japanese culture during the 1860s-70s, known as Japonisme.

Katie Getchell, the deputy director of the museum, told the Observer that the Kimono Wednesdays program was an offshoot of similar events that were offered in Japanese museums—The Setagaya in Tokyo, The Kyoto Municapal Museum, and The Nagoya/Boston Museum of Fine Arts—while La Japonaise was on loan there. Trying on the kimonos—or more specifically, uchikake—was a huge hit in Japan, so the MFA adopted a similar program.

The idea was to give visitors a “tactile experience” with the kimonos made in Japan “to understand and experience the painting in a new way,” Ms. Getchell told the Observer.

Since Kimono Wednesdays launched on June 24, the program has run twice. Three protesters holding signs came on the first night, and two on the second. Ms. Getchell said they were quiet and did not engage in discussion with visitors.

On a Facebook event description for Stand Against Yellow-Face @ the MFA, the protestors made their objections clear:

“There is no education on the garment’s origin, history, uses, or importance in Japanese society at the time. The act of non-Japanese museum staff throwing these kimonos on visitors as a “costume” event is an insult not only to our identities, experiences, and histories as Asian-Americans in America, but affects how society as a whole continues to typecast and deny our voices today…A willingness to engage thoughtfully with museum employees and visitors on the bullshit of this white supremacist ‘costume’ event are [sic] welcome.”

At first, Ms. Getchell explained, there was an “overwhelmingly positive response on Facebook” to the program from visitors. Ms. Getchell also clarified that there were in fact educators at the museum contextualizing the history of the painting. However due to summer scheduling, they could not attend every Wednesday.

But after monitoring the commotion on social media in the past few days, the MFA decided to alter the event so that visitors can no longer try the kimono on. Now, they can only touch it with their hands. The museum has issued an apology online and also detailed its plan to increase the number presentations of by educators.

“We were surprised by the negative concerns that were raised,” Ms. Getchell said to the Observer. “We clearly would never plan something that would be offensive in that way.”

Some people on Twitter have still not forgiven the museum:

Others think this is just another example of political correctness run amok:

The backlash against the MFA follows suit with the phenomena of political correctness that’s sweeping the nation, especially on college campuses, where trigger warnings are demanded to protect people from potentially offensive history, literature, or any sort of material.

MFA’s amended Kimono Wednesdays will continue every week until July 29. 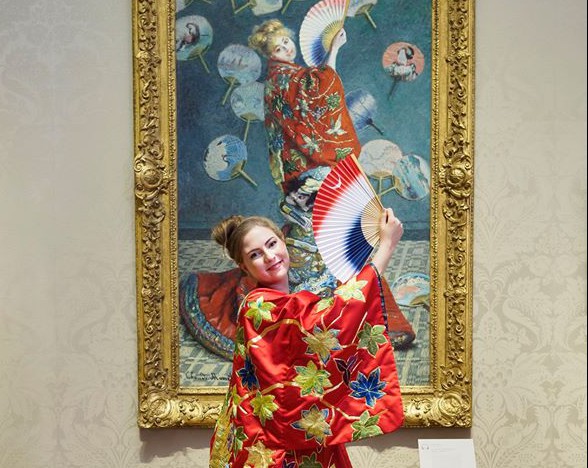