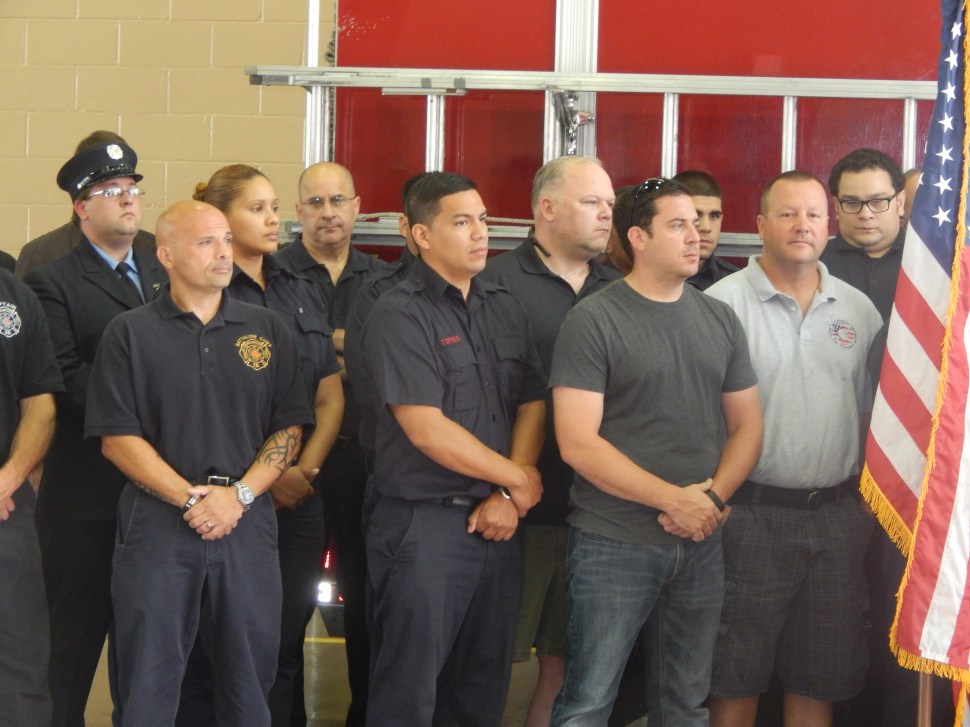 PATERSON – Appearing today at a firehouse to formally announce the awarding of a $7.5 million federal SAFER grant for the hiring of 49 new firefighters, U.S. Senator Bob Menendez (D-NJ) considered a developing US nuclear arms deal with Iran, still maintaining misgivings about the plan as he understands its current contents.  (Pizarro/PolitickerNJ)

Will Clive Owen have to work on his Paterson accent?

First it was King Arthur. (Pizarro/PolitickerNJ)

JERSEY CITY – Last year, Jersey City Police Officer Melvin V. Santiago was killed while responding to a call in the city’s West District. He was shot while in his patrol car in the early morning of July 13, 2014.  (Alfaro/PolitickerNJ)

PATERSON – U.S. Sen. Bob Menendez (D-NJ) and U.S. Rep. Bill Pascrell, Jr. (D-9), chair of the Congressional Fire Services Caucus, stood with local firefighters this morning to call for a greater commitment from Congress to support firefighters and reverse the impact of sequestration cuts on public safety.  The lawmakers also announced that the Department of Homeland Security (DHS) has awarded a $7.5 million federal Staffing for Adequate Fire and Emergency Response (SAFER) grant to the Paterson Fire Department to hire 49 new firefighters.  (Pizarro/PolitickerNJ)

Appearing today at an announcement by U.S. Senator Bob Menendez (D-NJ) and U.S. Rep. Bill Pascrell (D-NJ) of federal funding for the city’s hiring of new firefighters, Sayegh responded to a report concerning the fledgling behind-the-scenes candidacy of his friend turned rival.  (Pizarro/PolitickerNJ)

Booker for VP? Pascrell doubtful about an all-Northeast prez ticket

PATERSON U.S. Rep. Bill Pascrell (D-9) today told PolitickerNJ that it is very early to consider a vice presidential pick for former Secretary of State Hillary Clinton, who must still get through a Democratic Primary next year, but in the context of regional politics  he expressed misgivings about U.S. Senator Cory Booker (D-NJ) as a choice.  (Pizarro/PolitickerNJ)

At a time when many Republicans are racing to distance themselves from Donald J. Trump, Gov. Chris Christie of New Jersey is forging an unusual path: He’s taking pains to emphasize that, although he found Mr. Trump’s comments on illegal immigrants “inappropriate,” the real estate baron is a “friend,” the two are “close” and Mr. Trump is “a good guy.” (Corasaniti/The New York Times)

A New Jersey court on Monday denied a powerful state senator and several environmental groups party status in a case that will assess the legitimacy of Governor Chris Christie’s recent settlement with Exxon Mobil.

The state filed suit against Exxon in 2004 over the contamination of more than 1,000 acres of land in Bayonne and Linden, where the company had refineries. The state originally sought $8.9 billion in damages, but in February announced it had agreed to a $225 million settlement.  (Giambusso/Politico)

A judge on Monday rejected an attempt by environmental activists and a state lawmaker to intervene in New Jersey Gov. Chris Christie’s decision to settle a contamination case with Exxon Mobil Corp. for $225 million, a significant setback in the effort to scuttle the deal.

Superior Court Judge Michael Hogan ruled that the interests of the environmental groups and Sen. Raymond Lesniak were adequately represented by the state Department of Environmental Protection, the original party in the 11-year dispute. (Haggerty/Wall Street Journal)

Menendez: Obama foreign policy based on ‘hope’ not reality

If there is to be a deal to curb Iran’s nuclear ambitions in exchange for the lifting of sanctions, it’ll come over the objections of New Jersey’s senior senator. After an event in Paterson today, Bob Menendez made it clear what he thought of the president’s foreign policy philosophy. (Cruz/NJTV)

In a city with a long history of political corruption, Margie Semler brought to Passaic what every citizen should want in an elected official: honesty, a keen eye for numbers and a willingness to blow the whistle when those numbers didn’t add up. (Cowen/The Bergen Record)

In a case of interest to New Jersey, the U.S. Court of Appeals for the District of Columbia on July 7, 2015 rejected a challenge to a 75-year-ban on campaign contributions by federal government contractors. (Brindle/PolitickerNJ)

The latest Monmouth University Poll of Republican voters nationwide found significant bumps, both in the vote choice question and candidate favorability, for Jeb Bush and Donald Trump since they threw their hats into the rings.  Bobby Jindal has made no headway since he entered the race, and Chris Christie may actually be losing ground since his announcement.  Despite Trump’s surge, the poll also found that many GOP voters are not taking his candidacy seriously. (Politicker Staff)

An historic agreement Tuesday to limit Iran’s nuclear program in exchange for sanctions relief will ensure Iran has no possibility to achieve rapid nuclear weapons “breakout” capabilities for at least the next decade, diplomats said. Obama administration officials described the deal as moving beyond a political framework reached three months ago, and said it met all U.S. requirements for blocking pathways to weapons development with strict inspections and provisions to snap sanctions back into place if Iran violates the rules. The agreement will not take effect Iran is certified to have met its terms — something Iran says will be a matter of weeks — but Western diplomats have said could take at least until the end of the year. By Carol Morello and Karen DeYoung

In a time of polarized politics, Wisconsin Gov. Scott Walker offers no quarter, no retreat and no respite. He is a Midwestern who may lack the charisma of others in the race but whose message is designed to rouse his party’s base in ways others may not. He is a paradox: colorless and unflappable, but a warrior still. He has fought and won in Wisconsin — three elections in four years. He defeated his union opponents a legislative battle during his first months in office in the winter and spring of 2011. His state has been divided ever since. He won again in a bitter recall election in 2012 that turned into a national confrontation between left and right. He won a third time last November in his campaign for a second term. By Dan Balz 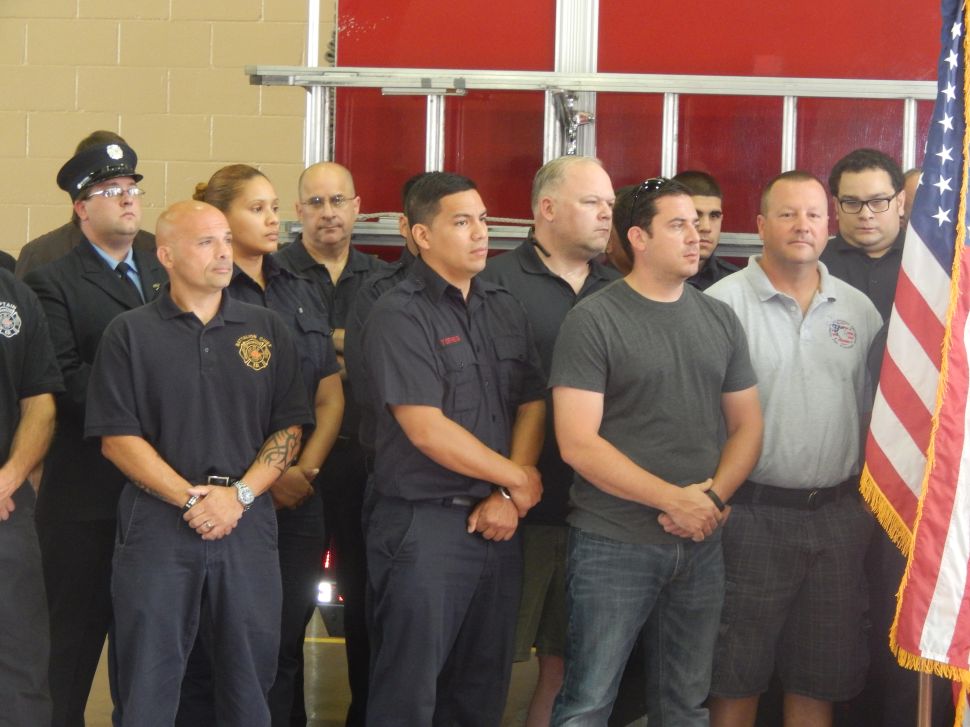