Traier on Murphy Enabling Resolution: ‘I know it looks terrible’

WAYNE – The chandeliers in North Jersey hang like a constellation strung by bosses from one mountain chalet to the next, dead-ending finally in that dreary approximation of democracy otherwise known as the two-party system, where tonight, Passaic County GOP Chairman John Traier presided over a room doubly overseen by the broadly grinning corner presence of former Chairman Peter Murphy of Totowa. (Pizarro/PolitickerNJ)

HACKENSACK—Bergen County Executive James Tedesco says that his seven months in office have, so far, been productive. Using his success last year as a barometer for the upcoming election in November, Tedesco says he believes that the Democratic Party will undoubtedly remain strong in Bergen County. (Alfaro/PolitickerNJ)

Bill Payne, the 1966 South Ward Race, and the Rise of Donald Payne and Sharpe James

WEST ORANGE – Bill Payne, the Newark family patriarch who paved the way for his younger brother, the late Donald Payne, to get to Congress, ran his first ward council race in 1966 against incumbent South Ward Councilman Lee Bernstein. It was an important election held shortly before long buried injustices broke the city apart in a summer of violence. (Pizarro/PolitickerNJ)

Despite a contentious 2014 election that knocked incumbent Republican Kathleen Donovan out of her County Executive seat, Bergen County Republicans are claiming the party is more unified than ever heading into the November 2015 election. (Alfaro/PolitickerNJ)

NJ Watchdog: Security? No one protects Christie from himself

State troopers guard Chris Christie as he travels the nation to run for president, yet no one seems able to protect the governor from his own choices. (Lagerkvist/NJ Watchdog)

NEWARK, N.J. — New Jersey Gov. Chris Christie is calling for changes in the criminal justice system, seeking in part to give nonviolent drug offenders a better shot at rebuilding their lives and to improve frayed relations between communities and police. (Colvin/AP)

Teacher-Evaluation ratings released for schools around the state

Menendez raises over $1.5M for legal defense since indictment

Governor Christie picked up his second presidential endorsement from a sitting governor Wednesday, when Maryland Gov. Larry Hogan announced his support during a diner stop in Annapolis.

Earlier this month, Maine Gov. Paul LePage became the first sitting elected official to endorse Christie, one day after he announced he was seeking the GOP nomination for president. (Hayes/The Record)

WASHINGTON (AP) — President Barack Obama has signed an executive order to create an emergency board to investigate the dispute between New Jersey Transit and its labor unions.

Talks between the transit agency and labor unions broke down last month. The negotiations include all 17 of NJ Transit’s unions that represent more than 4,000 workers. The unions have been working without a contract for four years. (Associated Press)

Phil Murphy, the former U.S. Ambassador to Germany who is in 2017 gubernatorial mode, contributed to the Menendez Legal Defense Fund in May, according to a federal report filed today.

Murphy contributed $5,000 to the legal defense fund, which Menendez’s allies formed to help the senator gear up for a courtroom war.

Jersey City Mayor Steven Fulop – similarly in the 2017 hunt for governor – has also contributed to the fund, according to sources. (Pizarro/PolitickerNJ)

The second quarter filing within the hour for the Menendez Legal Defense Fund reveals that the embattled U.S. Senator raised $1,557,003 between April-June 2015, post-indictment.

“Today’s report reaffirms the broad, deep and unwavering support the Senator has in New Jersey and across the country from those who know him, who share his longstanding beliefs on critical issues, and who want him to continue to fight for those beliefs and on their behalf,” said Michael Soliman, the senator’s political advisor.

In April, the feds slammed Menendez with federal corruption charges, which he is now fighting. (Pizarro/PolitickerNJ)

Suffolk Poll: 59% of Democrats say they would vote for Clinton

Hillary Clinton is far ahead of the pack in a recent poll of Democratic and Democratic-leaning independent voters, with 59 percent of those voters saying they would vote for the former secretary of state in the 2016 presidential primaries and caucuses, according to a national poll from Suffolk University/USA TODAY. (PolitickerNJ)

“I happen to believe that he’s exactly the leader that we need,” said the Republican Governor. “I think that he should be the next President. And I think he will be the next President. And I’m going to do everything in my power to help make that happen. We’re going to work hard for him here in Maryland and any place else that he needs help from us. We’ll go anywhere and do anything.” (Pizarro/PolitickerNJ)

Speaker Vincent Prieto (D-32) emceed the fundraiser, attended by around 30 people in a private residence.

illary Clinton continues to hold a sizable lead over the Democratic field, but not quite as sizable as a few months ago.  The latest Monmouth University Poll also found that Joe Biden could take some of Clinton’s support should he choose to run. (PolitickerNJ)

GOP lawmaker: No cash for campaign arm because it backs gays

Closed committee meetings are typically wonkish, routine affairs. But Friday’s session of Republicans on the House Financial Services Committee broke that pattern in spectacular fashion, laying bare the growing acrimony and sense of disorder within the House Republican Conference. (Politico)

What will local control in Newark mean to Paterson, Jersey City, Camden?

All the stir about the state’s plans to relinquish control of Newark’s schools has raised a collateral question: What does all this mean for the other three school districts under at least partial state operation? (Mooney/NJ Spotlight) 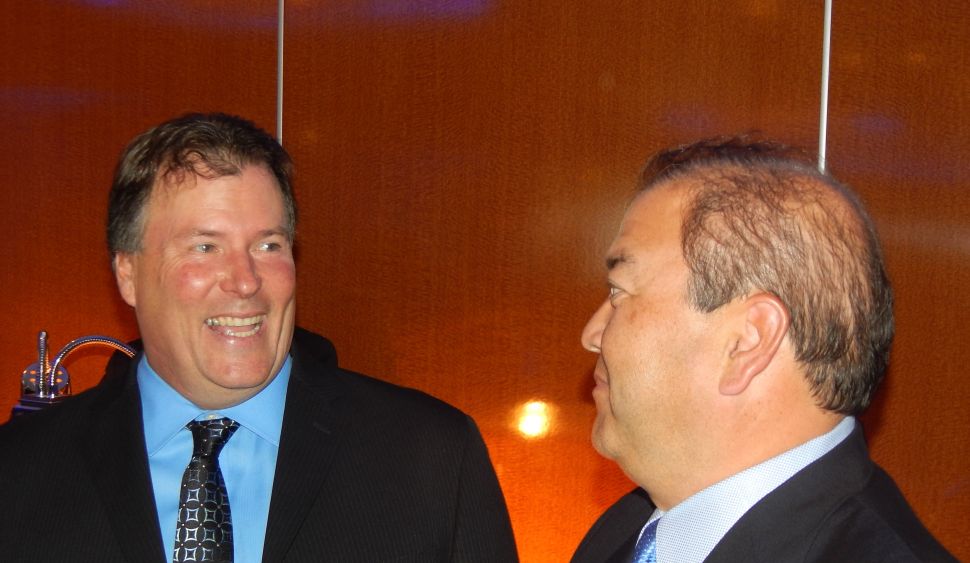