Christie tears into Obama at his prez campaign kickoff

In launching his 2016 presidential campaign this morning, Gov. Chris Christie sold himself as a compromiser, while simultaneously savaging President Barack Obama, whom he once heralded as a federal helpmate at the time of Christie’s greatest popularity in the midst and in the immediate aftermath of Hurricane Sandy.

“Obama lives in his own world, not in our world,” said Christie, who derided the Democratic President’s “weak and feckless foreign policy.  (Pizarro/PolitickerNJ)

Today, Chris Christie announced his New Jersey leadership teams made up of more than 200 Republican leaders and elected officials, as well as business leaders from across the state who are supporting his candidacy.  (Pizarro/PolitickerNJ)

IVINGSTON — Inside was mostly camera flashes and fanfare, a welcoming party of friends and supporters encircling Gov. Chris Christie as he formally kicked-off a long-awaited presidential run.

Outside, though, was a different story — a swarming mass of public labor employees and activists bearing red shirts and blasting the Republican for failing to deliver on a series of policy fronts in the state, from the economy to Hurricane Sandy recovery to a beleaguered pension and benefits fund.  (Brush/PolitickerNJ)

LIVINGSTON — Gov. Chris Christie may have been the subject of heated protests outside the gymnasium of Livingston High School where he formally launched a bid for president here today, but inside, among a crowd of cheering supporters that included the majority of the state’s GOP lawmakers, there was little question of allegiance.

The gushing began as soon as Christie’s mouth shut.  (Brush/PolitickerNJ)

LIVINGSTON – Jeff Chiesa, whose name has been intertwined with the political fortunes of New Jersey Governor Chris Christie for years, stated that on the day his close ally officially entered the 2016 presidential race, he believes that fortune favors the bold.

“It’s an incredible day for the governor and for everybody who has known him for a long time. I’m incredibly proud of him,” said Chiesa, an attorney who met Chris Christie in private practice, served under his friend in the U.S. Attorney’s Office, then was later named the governor’s chief counsel, then state Attorney General and ultimately appointed U.S. Senator by Christie to complete the term of the late U.S. Senator Frank Lautenberg (D-NJ). “He’s going to represent New Jersey and the country in a fantastic way.”  (Bonamo/PolitickerNJ)

Stack at Christie kickoff: ‘He’s been a great friend’

LIVINGSTON  — The crowd at Gov. Chris Christie’s campaign kickoff this afternoon was composed overwhelming of Republican supporters — friends, family, state Senators and Assemblypeople — but there were a few notable exceptions, by PolitickerNJ’s count.  (Brush/PolitickerNJ)

Bramnick on 2016 prez race: “We deserve a leader like Chris Christie”

LIVINGSTON – State Assembly Minority Leader Jon Bramnick (R-21) declared on the day that New Jersey Governor Chris Christie declared his candidacy for President of the United States that the White House run launched by the Garden State’s most prominent Republican will help the state GOP take back the Assembly in the 2015 elections.  (Bonamo/PolitickerNJ)

Carroll says it’s still too early for a prez endorsement

Assemblyman Michael Patrick Carroll (R-25) said his absence from a list of backers of Gov. Chris Christie otherwise known as the campaign team should not be read as a set-in-stone rejection of Christie.

LIVINGSTON – New Jersey Lieutenant Governor Kim Guadagno noted that although every thing has shifted now that Governor Chris Christie has officially entered the race for the 2016 Republican presidential nomination, the more things change, the more they stay the same.

“Things haven’t changed at all. I’ll fill in when [Governor Christie] needs me to,” said Guadagno on Tuesday amidst the packed crowd inside the Livingston High School gymnasium to watch Christie announce his White House bid in the town he grew up in. “That’s my job, and I’ve been doing that job for six years now.”  (Bonamo/PolitickerNJ)

Guadagno on Christie 2016: “I’ll fill in when he needs me to” | New Jersey News, Politics, Opinion, and Analysis

GLEN ROCK – Backed by a platoon of labor leaders and a posse of Bergen Democratic politicians, Jersey City Mayor Steve Fulop rode into the Glen Rock train station on Tuesday to decry a proposed nine percent increase in NJ Transit fares that would be accompanied by service cuts. Fulop then also made sure to slash New Jersey Governor Chris Christie on the day that the Garden State Republican announced his 2016 presidential bid with words that cut close to the bone.  (Bonamo/PolitickerNJ)

LIVINGSTON – Steps away from the stage where New Jersey Governor Chris Christie is on the verge of declaring that he is running for President in 2016, state Senator Tom Kean Jr. (R-21) confirmed that despite reports that he was supporting former Florida Governor Jeb Bush among the scrum of Republicans running for the White House, he is now firmly in step with Christie.  (Bonamo/PolitickerNJ)

JERSEY CITY – Democrats from around New Jersey rolled on to the left bank of the Hudson River on Monday night to put money in the bank for Jersey City Mayor Steve Fulop, a potential 2017 Democratic gubernatorial candidate, who demonstrated that he can raise the cash needed if he chooses to launch a statewide office bid.  (Bonamo/PolitickerNJ)

LIVINGSTON, N.J. — The breakup has been a long time coming. For two years, he has spent more and more time away, openly flirting with others in what looked a lot like a trial separation. At home, he got an increasingly chilly reception.

Gov. Chris Christie’s entry into the presidential race moves his strained relationship with New Jersey voters into something looking a lot like a divorce. And it would probably be uncontested.   (Zernike and Corasaniti/The New York Times)

LIVINGSTON, N. J.—New Jersey Gov. Chris Christie made his long-anticipated plunge into the 2016 Republican presidential race, and immediately began testing whether his approach as a tough, straight-talking leader can win over centrist primary voters in a crowded field.  (Haddon/Wall Street Journal)

A federal judge in New Jersey has dismissed a class-action lawsuit filed by people stuck in traffic in the 2013 George Washington Bridge lane closings, a scandal that has dogged Governor Chris Christie in his bid to run for U.S. president.

The ruling came on Monday, a day before Christie announced he is seeking the Republican presidential nomination in 2016.

The White House bid is seen as an uphill run for the 52-year-old governor, whose image took a hit in the scandal dubbed Bridgegate.  (Wulfhorst/Reuters)

Bon Jovi: I ‘absolutely’ gave Christie permission to use my songs

Chris Christie got permission from fellow New Jersey native Jon Bon Jovi to use his songs during his presidential campaign, the rocker confirmed to POLITICO through a publicist on Tuesday.

Americans are deeply conflicted as to what, if anything can be done with new gun legislation in the aftermath of the murders of nine people in a Charleston, S.C., church, according to a Suffolk University/USA TODAY nationwide poll.  (PolitickerNJ)

Acting Attorney General John J. Hoffman announced that two suspended supervisors for the North Bergen Township Department of Public Works were convicted at trial today of official misconduct and other charges for assigning municipal employees to work on election campaigns and to complete personal chores or projects for them or their boss, Superintendent James Wiley.

Troy Bunero, 48, of North Bergen, and Francis “Frank” Longo, 49, of Ridgefield Park, were convicted by a Hudson County jury of second-degree charges of conspiracy, official misconduct and pattern of official misconduct, as well as third-degree charges of theft by unlawful taking and misapplication of government property.  In addition, Bunero was convicted of third-degree tampering with public records and fourth-degree falsifying records for submitting false timesheets.  The verdict followed a seven-week trial before Superior Court Judge Paul M. DePascale.  (Pizarro/PolitickerNJ)

New Jersey Governor Chris Christie has announced his candidacy for President of the United States, and voters across the nation will be looking to see how New Jerseyans feel about him. Fairleigh Dickinson University’s PublicMind finds that the governor’s approval ratings are upside down, with 30 percent of New Jersey voters saying they approve of the job he’s doing as governor, and 55 percent saying they disapprove. Over half (57%) express concern over the direction the state is headed, with around a quarter (28%) content with its trajectory. Additionally, few in the state believe the quality of their lives have improved in any meaningful way since he was elected governor in 2009.  (PolitickerNJ)

Gov. Chris Christie kicks off today amid sinking ratings, unflattering perceptions, and skepticism about his presidential chances from home state voters, according to a number of Rutgers-Eagleton from the past year.

Discontent among New Jerseyans has been fueled by Bridgegate and other allegations against Christie and his administration dating to January 2014. While Christie was an early frontrunner for 2016 due to unprecedented post-Superstorm Sandy ratings highs – at his peak, Christie had a 70 percent favorable rating in February 2013 – his announcement of a presidential bid comes during his lowest point in public opinion to date as governor.  (PolitickerNJ)

Livingston High School, Bill Clinton, and obstinacy, vision, or both?

The year was 1992, and a certain Governor was in Livingston High School intent on turning the presidential tide in his direction in New Jersey.  (Pizarro/PolitickerNJ) 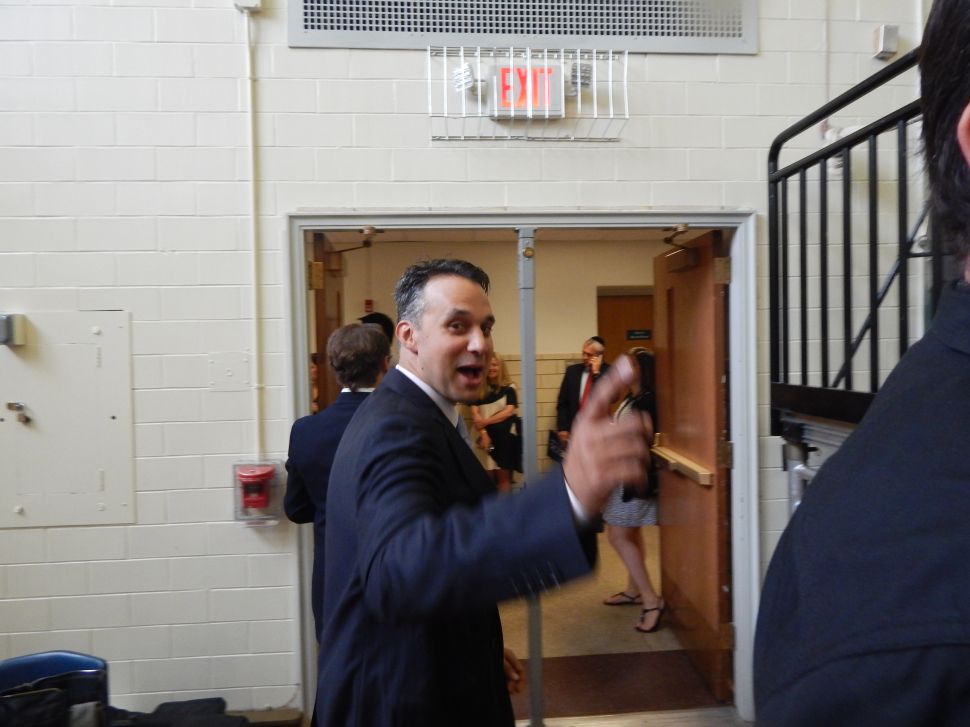