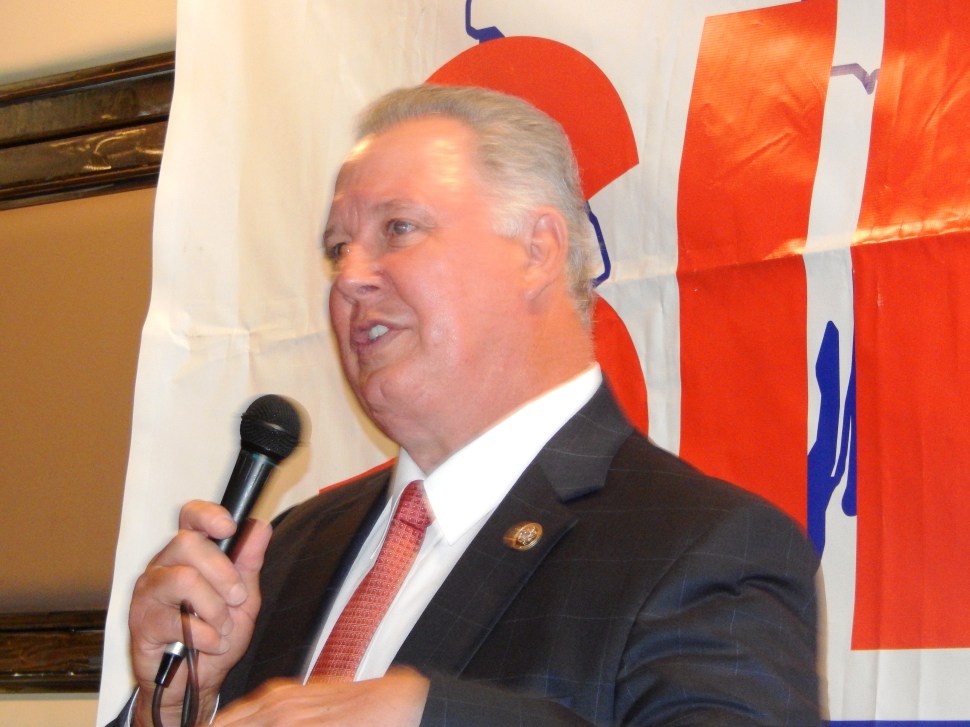 JERSEY CITY – You can see the Statue of Liberty out here but those who have spent years on this decrepit pier evidently turn inward after a time, to that close-knit circle of fellow bone-tired inheritors of a tradition that once prompted the French to offer their gift apparently out of recognition of democracy, all but a distant halogen now among this machine crowd of hardnosed, self-interested Hudson pols. (Pizarro/PolitickerNJ)

State Senator Ronald L. Rice (D-28), Newark, this morning grilled the charter school representative from the Christie Administration, urging a slow down of charter school approvals in New Jersey’s urban areas until a wholly transparent, rigorous and uniform structure exists on the state end of the process. (Pizarro/PolitickerNJ)

NEWARK – On the 15th floor of 1 Washington Park, Audible CEO Don Katz talked over the heads of a packed group of politicians, liberal arts nitwits and assorted press people as he calmly laid out a technological vision for the City, a few of those present jerking to attention when he noted “the hip new bars” his $50 million investment will undoubtedly draw to the area, right around the former from the New Jersey Performing Arts Center. (Pizarro/PolitickerNJ)

Dana Wefer is one of the challengers for Hoboken’s Fourth Ward council seat. (Alfaro/PolitickerNJ)

LYNDHURST—While U.S. Rep. Bill Pascrell (D-9) says he has not yet had the time to fully review the Iran nuclear deal, the congressman says that his initial response to deal is that it is “moving in the right direction.” (Alfaro/PolitickerNJ)

Lawyers for Sen. Bob Menendez and co-defendant Salomon Melgen urged a judge to set aside their corruption indictments on Monday, arguing improper conduct by prosecutors and FBI agents led to violations of both the Constitution and Supreme Court precedents. (Jackson/The Bergen Record)

Don Katz wants Newark to be the new Brooklyn. (Aron/NJTV)

Plan for Christie Gun Law Changes Not Put Forward Yet

Three weeks after Governor Christie said, in a late-night email on the eve of his presidential campaign, that he would propose “common-sense” changes to New Jersey’s gun regulations, no plan has been put forward. (Racioppi/The Bergen Record)

More than 300 people with developmental disabilities will no longer be forced to leave out-of-state residential programs under a deal announced Monday between the Christie administration and Senate leaders. (Akin, Racioppi/The Bergen Record)

The news is in for Christie, and it’s not good. (Mulshine/NJ Advance Media for NJ.com)

Chris Christie in Davenport on Friday

For an ambitious, surging politician, Chris Christie’s desire to run for a second term as Governor, and to win in a landslide, would have been irresistible — but in retrospect it may have been a defining mistake. He would be positioning himself far more viably as a presidential hopeful now if he had taken the counter-intuitive, but ultimately more shrewd decision to step down after a single, successful term. (Sheppard/Huff Post)

MOUNT PLEASANT — New Jersey Gov. Chris Christie kept rotating 360 degrees around a restaurant here, fielding questions about terrorism, the economy and Social Security — almost everything except the other GOP presidential candidate from his region who has dominated the news as of late. (Behre/The Post and Courier)

Lawyers for Sen. Robert Menendez accused federal prosecutors and FBI agents Monday of lying to win a corruption indictment against him this spring, saying the Justice Department would “stop at nothing” to try to convict the powerful lawmaker. The allegations are included in more than 400 pages of legal arguments filed to try to persuade the court to dismiss the case against Menendez (D-N.J.) and a longtime friend and donor, Florida eye doctor Salomon Melgen, who is accused of buying favors from the senator with gifts and vacations. The joint filings by lawyers for the two men demonstrate the aggressive legal strategy that Menendez, 61, has adopted as he readies for the fight of his life to save an enduring career that helped him rise from a childhood in a tenement apartment as a son of Cuban immigrants to become one of the country’s most influential senators. By Carol D. Leonnig/WaPo

A&P, which went from being the largest food retailer in America to a regional supermarket chain struggling against nimbler, more innovative competitors, will no longer exist if a bankruptcy protection and sale plan unveiled by the company Monday proceeds as expected. (Verdon/The Bergen Record)

A pair of projects that could profoundly change Atlantic City’s Chelsea section edged closer to construction Monday, as the Casino Reinvestment Development Authority gave zoning-related approvals for developments at and around the former Atlantic Club. (Kramer/The Press of Atlantic City)

Businessman Donald Trump surged into the lead for the 2016 Republican presidential nomination, with almost twice the support of his closest rival, just as he ignited a new controversy after making disparaging remarks about Sen. John McCain’s Vietnam War service, according to a new Washington Post-ABC News poll. Support for Trump fell sharply on the one night that voters were surveyed following those comments. Telephone interviewing for the poll began Thursday, and most calls were completed before the news about the remarks was widely reported. Although the sample size for the final day was small, the decline was statistically significant. By Dan Balz and Peyton M. Craighill/WaPo

Ohio Gov. John Kasich is poised to join the 2016 presidential race on Tuesday morning, carrying a message of fiscal conservatism and social welfare compassion that he hopes will shake up the Republican Party and vault him into contention for the party’s nomination. The two-term governor will make his intentions known at a rally on the campus of Ohio State University. There is little mystery to what his decision will be. For months, he has traveled to the early primary and caucus states, sought out prospective donors around the country and assembled campaign and Super PAC staffs that include longtime advisers and veteran strategists who are newcomers to his inner circle. By Dan Balz/WaPo

The Monmouth University Poll of likely Iowa Republican caucusgoers finds Scott Walker in the lead and Donald Trump in second place.  The poll did not find any significant change in support for Trump in interviews conducted after his comments about John McCain’s military service.  The poll also found that Bobby Jindal makes his way into the second tier of candidates, doing better in Iowa than in the national polls. (Politicker Staff) 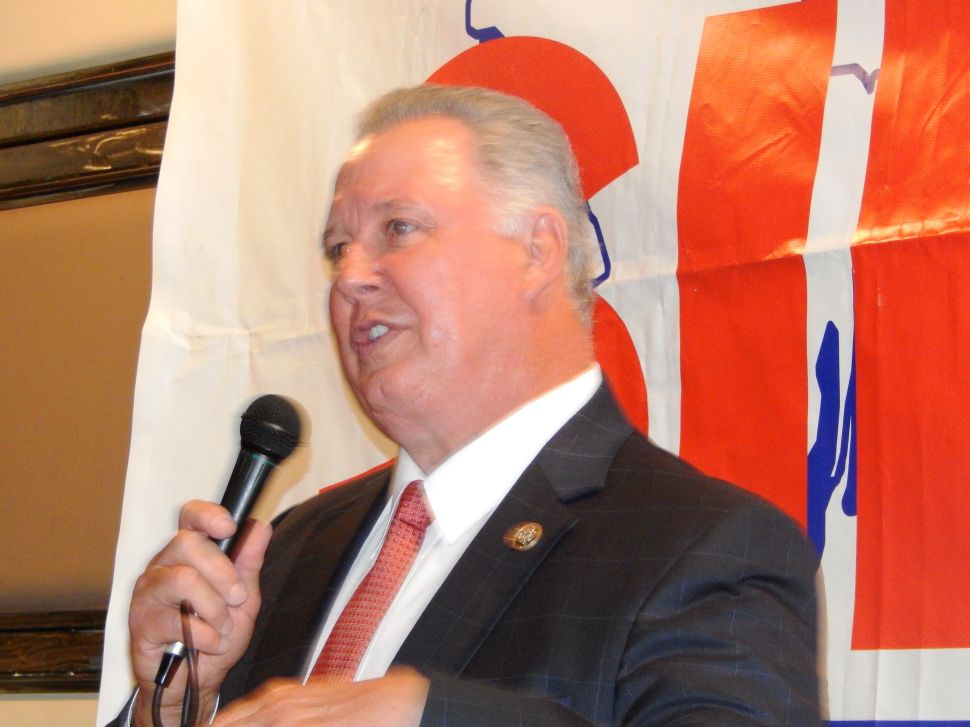