In April, an earthquake devastated Nepal, killing more than 8,500 people and destroying some of the country’s most important cultural sites. Now, New York’s Rubin Museum of Art has obtained never before seen images from Kathmandu-based photographer Kiran Man Chitrakar of Nepal’s ruined cultural heritage sites, among them a UNESCO World Heritage site in Bhaktapur, a Vaishnava shrine in the Kathmandu valley, a significant Buddhist shrine complex in Kathmandu City, and the iconic Kasthamandap Temple in Durbar Square.

On a special section of the museum’s website it has, as of this morning, posted photographs of Nepal’s hard-hit cultural sites before the earthquake along with recent images taken by the photographer in the event’s aftermath.

The Rubin is currently presenting a special art installation in its lobby, titled “Honoring Nepal,” featuring a selection of the institution’s 600 Nepalese objects. The online portal for “Honoring Nepal” includes information about concurrent programming and events, as well as a list of charities and humanitarian relief organizations for those who wish to support rebuilding efforts.

In a June 11 statement, UNESCO raised concerns over the reopening of damaged sites, which it has been evaluating closely in the week’s following the April-May earthquakes. Today, several of the sites have reopened to visitors, even as recovery is ongoing.

Durbar Square in Bhaktapur, which is included on UNESCO’s list of significant cultural heritage sites, was an ancient city state, and its Batsala Devi temple built between the late 17th and early 18th century collapsed during the quake. Below, an image of the plaza from 2014, before the disaster.

The photographer, Mr. Chitrakar, is the third member of his family, following his father and grandfather, to serve as a royal court photographer in the country. In 1930, the photographer’s grandfather snapped a photo of the world famous wooden pavilion—said to be made from a single tree—which gave the city of Kathmandu its name. In 1934, the temple survived an earthquake, and in 1966 underwent a major renovation.

Swayambhucaitya is considered one of the most important complexes for Newar Buddhists in the Nepalese capital. It is located on a hill in the western part of the city. Below is the site in 1970, photographed by Mr. Chitrakar’s father.

Changu Narayan temple dates to the fourth century AD, and include inscriptions belonging to the ruler of the Licchavi dynasty who lived between the end of the fifth and early sixth century. The site underwent renovations in the 16th century, and was damaged by fire in 1702.

Today, the main temple still stands, but its walls have suffered major damage.

Another view of the country’s significant cultural sites comes via a May 6 post from the museum’s blog, highlighting iconic locations through artistic depictions from the collection. 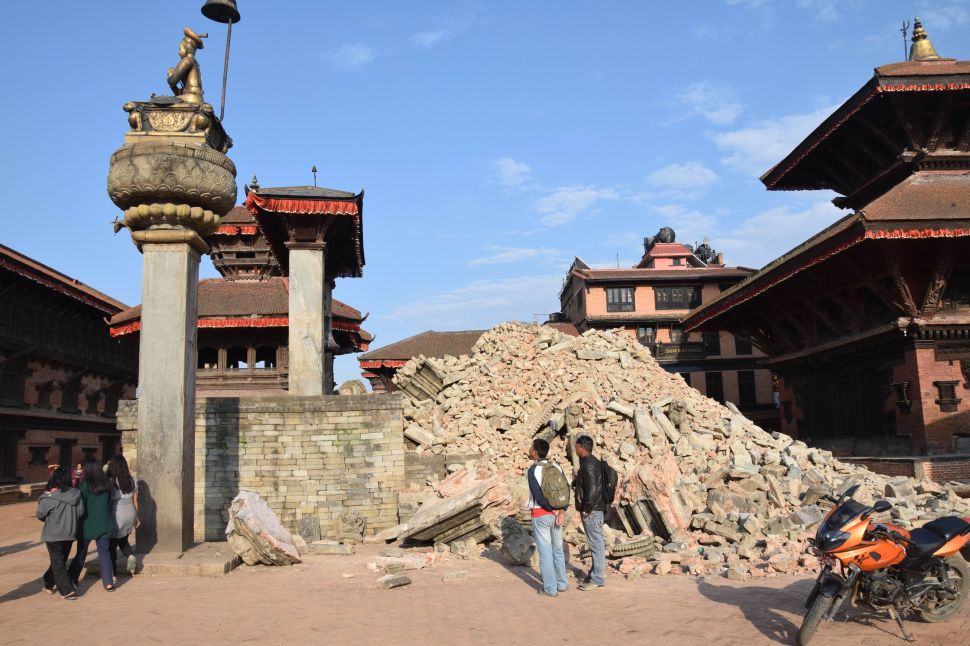