Just when it seemed like The New York Post couldn’t get any more ridiculous in its furious campaign against the homeless, the tabloid made a reporter go undercover as a homeless man and walk around Gracie Mansion.

The reporter, Kevin Fasick, was dressed in dirty clothes and wore a raggedy blanket around his neck. He held a garbage bag in one hand and an old coffee cup in the other, and, just in case that was too subtle, hung a sign around his neck that said “help the homeless.” Photos show Mr. Fasick rummaging through the trash, lying on the street and pretending to sleep on a bench. All in the name of journalism! Eventually, a compassionate bystander gave the journalist her lunch, which he ate.

The most embarrassing stunt in the history of journalism was meant to prove that a homeless person asking for money outside the mayoral residence would be asked to leave. According to the story, it took 45 minutes to get a reaction from the cops. Eventually, Mr. Faskick was asked to leave by a couple cops. But he wasn’t forced to leave or anything. One police officer asked him if he was sick and wanted to go to the hospital, which seems like what a cop should do.

Over the weekend, the cover of the Post was taken up both Saturday and Sunday with the story of a homeless man named John Tucker on an Upper West Side street near where Post editor in chief Col Allen lives (something today’s headline seems to allude to). As Gawker reported, the more than 16 journalists who were assigned to work on the story were, not surprisingly, not exactly thrilled that they were being forced to torment a homeless man because he peed on a street near where their boss lives.

But making a reporter actually pretend to be homeless and root through the trash? Well, things in journalism can always get worse. 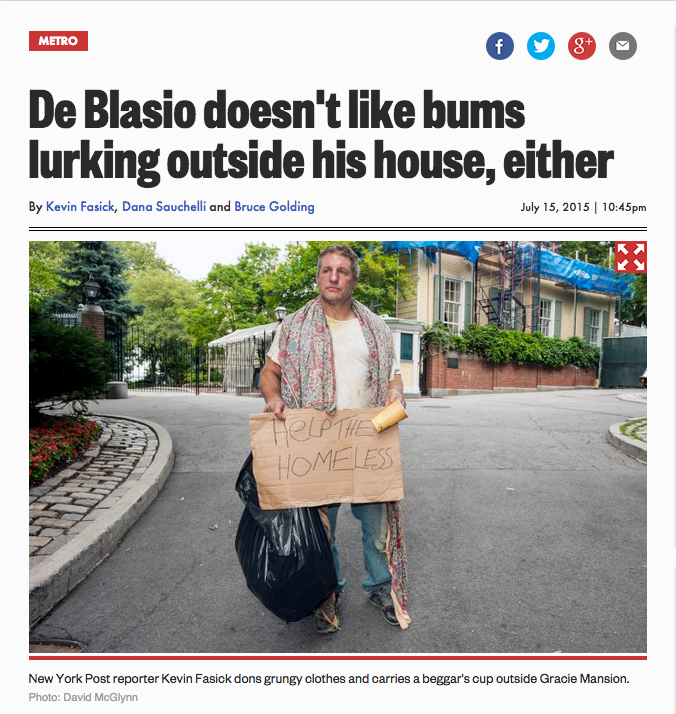