PATERSON – Bill Pascrell of the 6th Ward was 16 when his uncle took him to a meeting of the Paterson Democratic Party. Someone threw a chair at that event.

“I thought to myself, ‘This is interesting,'” recalled Pascrell earlier today in his downtown district office.

Pascrell won his first race in 1987 and would serve five terms in the Assembly, his legislative career overlapping into local elected office when he ran for mayor in 1990.

Paterson Mayor Frank Graves died in Mach of that year. Pascrell had been out of town at a basketball tournament and returned to Paterson on a premonition. Bill Flynn at the fire department called Pascrell and told him Graves had died.

Then serving as chairman of the Passaic County Democratic Committee, Pascrell wasn’t supposed to run for mayor, but he wanted the job. Mike Adamo, the Rev. Albert Roe and Roy P. Griffin also got in the race.  Graves had handpicked Assemblyman John Girgenti to replace him in the senate, and when Girgenti secured Pascrell’s backing for that seat, Pascrell hoped for his running mate’s support in return for mayor. But Girgenti backed Adamo.

Pascrell won that 1990 race big, with over 51% of the vote, clobbering his party rival Adamo (18.35%) and doubling up second place finisher Roe (24.80%). Pascrell said he won the election in part owing to a vigorous outreach in the Latino community. In that four-man contest, he ended up with 75% of the Latino vote, the citywide difference maker.

Political adviser Don Alois had a plan for Pascrell from the start, going back to when Pascrell ran for the assembly for the first time. Alois told him “You’ve got to go out in order to come back in. “He had this picture,” the congressman said. “I didn’t understand it at the time but I went with it.”

Pascrell left the party chairmanship in 1990 when he became mayor. In his 1991 assembly reelection campaign, he ran on the Democratic ticket with same-party frenemy Girgenti. Trying to maintain what Graves had handed off to him, Girgenti ran against former Paterson Mayor Pat Kramer, a Republican.

Kramer and Pascrell were personal friends. Pascrell told Democratic ticket-mate Girgenti he wouldn’t be part of any negative attacks on Kramer. Girgenti pulled out the election after GOP Passaic County Sheriff Ed Englehardt backed him in the closing days.

People talk about Pascrell always craving Congress, the same way Menendez telegraphed his interest in federal office when as mayor he mounted a framed portrait of then-Senator Bill Bradley in Union City Hall. But for years now Pascrell’s talked nostalgically about his stewardship of City Hall.  “There’s no bologna when you’re mayor,” he said.

Sitting Mayor Jose “Joey” Torres put it this way to PolitickerNj last month: “Some guys sit on a couch and click through the channels on the TV set,” he said. “As mayor, you’re making decisions every second and every minute, and you must make them quickly, trying as best you can to appreciate the fullness of their impact. But often you must make them as fast as someone else might change the channels on a TV set.”

Pascrell’s reelection campaign in 1994 pitted him against hard-charging challenger Marty Barnes, whom he had already defeated in his 1991 assembly reelection bid. “He made it a very racial kind of thing,” said Pascrell. “The argument he made seemed to be along the lines of, ‘It’s my time.’ I told him, ‘if I think I’m understanding you, your time was a long time ago.'”

Pascrell beat Barnes with 46% of the citywide vote.

A Republican, Barnes would run for mayor and win when Pascrell vacated the seat to get sworn into Congress two years later. He was Paterson’s first African-American Mayor and the only African American to serve as mayor until Jeffrey Jones’ election in 2010.

That was a big race.

In his reelection campaign, Martini tried to paint the urban mayor as the corrupt guy from Paterson. He threw pictures of dilapidated buildings from Silk City into mail pieces. In much the same way as Joe DiVincenzo would ask for intervention from then-U.S. Attorney Chris Christie, who wrote a letter dismissing charges of corruption made by DiVincenzo’s Democratic Primary rival campaign, Pascrell appealed to then U.S. Attorney-Faith S. Hochberg for relief. Hochberg responded with a letter specifying that Pascrell was not being investigated and had never been investigated. Pascrell admonished Martini and accused him of playing on the worst stereotypes of Italian Americans for political gain.

Pascrell’s close ties to the Clintons goes back many years, but although then-President Bill Clinton didn’t get involved in the 1996 election, U.S. Rep. Dick Gephardt, who at the time chaired the Democratic Congressional Campaign Committee (DCCC).contributed.

U.S. Rep. John Lewis (D-Ga.) came to Passaic High School to campaign for Pascrell, presaging his 2012 statements on behalf of his old friend’s candidacy in 2012.

Asked if he implemented any special campaign tactics to defeat Martini, “This is arithmetic,” a grinning Pascrell said. “You gotta be able to add. Most politicians can’t add. My whole thing is early registration.”

Matt Kiernan, who was close to then-Essex County Executive Jim Treffinger, took a run at Pascrell in 1998. The incumbent won with 62% of the vote and solidified his standing in the district.

In 2009, Pascrell was not on the ballot, and although he supported former Governor James Florio for U.S. Senate over Goldman Sachs newcomer Jon Corzine in 2000 and himself flirted with undertaking a gubernatorial bid against Corzine when the latter ran for reelection, Pascrell – along with his House colleague Pallone – played an avid and aggressive role in support of Corzine during the general election. Pascrell specifically cited the U.S. Attorney’s Office’s use of deferred prosecution agreements for powerful and politically connected corporate offenders.

In 2010, Tea Party Republicans targeted Obamacare and Democratic incumbents in New Jersey, including Frank Pallone, Steve Rothman, Rush Holt and Pascrell. The election – which the incumbent Democrat won over GOP challenger Roland Straten, a local manufacturer, with 63% of the vote, gave Pascrell an opportunity to harden his message and stare down a crowd of naysayers at Montclair University. But ultimately that year proved critical in terms of mechanical preparation. The departure of popular Passaic County Sheriff Jerry Speziale from the ticket left Pascrell and his team in charge of getting out the vote and projecting political supremacy over Passaic County. Their efforts on a short campaign runway to get their campaign apparatus fully operational would prove critical as they faced the after-effects of 2011 redistricting, when New Jersey lost a congressional district and Republicans propelled Rothman and Pascrell into each other’s path.

PolitickerNJ asked Pascrell which of his contests he felt most proud of, recognizing, of course, that all of them are connected. He was proudest, he said, of 2012, in which he triumphed over Rothman before defeating a well-funded and well-known Republican, Rabbi Shmuley Boteach.

Right after that primary election, PolitickerNJ talked to the congressman about that campaign, wherein Pascrell brought an old ally, former President Bill Clinton, to Paterson to campaign for him, and counter-attacked Rothman’s challenge of absentee vote totals with a statement from Civil Rights giant Lewis.

“We saw the momentum and we knew what we were going to say and that we were going to stay away from issues that didn’t make any sense,” the congressman said three years ago, speaking by telephone from Washington, D.C. “We made determinations and surgically we moved and they made a big, big mistake by going negative. They were going negative and we stuck to our field operation. We stuck to our plan, which included new voter registration, and they laughed at us. We stuck at it. I knew it was important to register people, to get signatures, because then people begin to invest in the campaign. We started this back in February and March.

“The 60-40 number never bothered me,” he added, referring to the disparity between that part of Rothman’s old district in the newly redistricted 9th versus Pascrell’s carry-over.

“Stop blaming other people. You put people around you who are not ‘yes’ people. I don’t want pigeons around me. They don’t have to be geniuses, just have some common sense and their noses to the grindstone. You accept that you make mistakes because you’re finite. You accept that you’re older and maybe so you proceed at your own peril. I knew they were not going to have the field operation we had. We felt we could motivate ours. We’re used to getting out ground troops, and I don’t ask people to do anything I don’t do myself, whether it’s licking stamps and sticking them on envelopes or hanging door hangers.”

Earlier today, we also asked him which of his opponents over the years he felt was the most skillful. Pascrell thought about if for awhile and then answered. “Martini,” he said. “I had the feeling I was going to win because he wasn’t going to outhustle me. But he was a skillful debater, and made a good presentation whenever he gave a speech. I think he got more than he bargained for. I think in the end we forgave each other.”

Martini subsequently became the United States District Court Judge who heard the corruption trial of Newark Mayor Sharpe James. Then U.S. Attorney Christie prosecuted James. When PolitickerNJ mentioned Martini’s public statement from the bench chastising the U.S. Attorney’s Office for being overzealous in its pursuit of a James takedown, Pascrell said, “I thought Martini did an excellent job.

“The thing about politics,” he added, “is all of us – all politicians – figure we’re God’s gift to politics, and we’re not. You’ve got to prove yourself. I think my whole career I’ve had my boots on the ground. It’s just part of my personality.

“I have always felt, too, that when I learned an issue, I was going to debate anybody,” Pascrell added. “I love to debate the issues. I love it. I love to debate. It really comes down to this: who do the people trust when it gets tough? Will this person crawl under the desk and hide, or take off the gloves and fight? Many of the people who vote for me don’t agree with everything I say. But they know I won’t back down.” 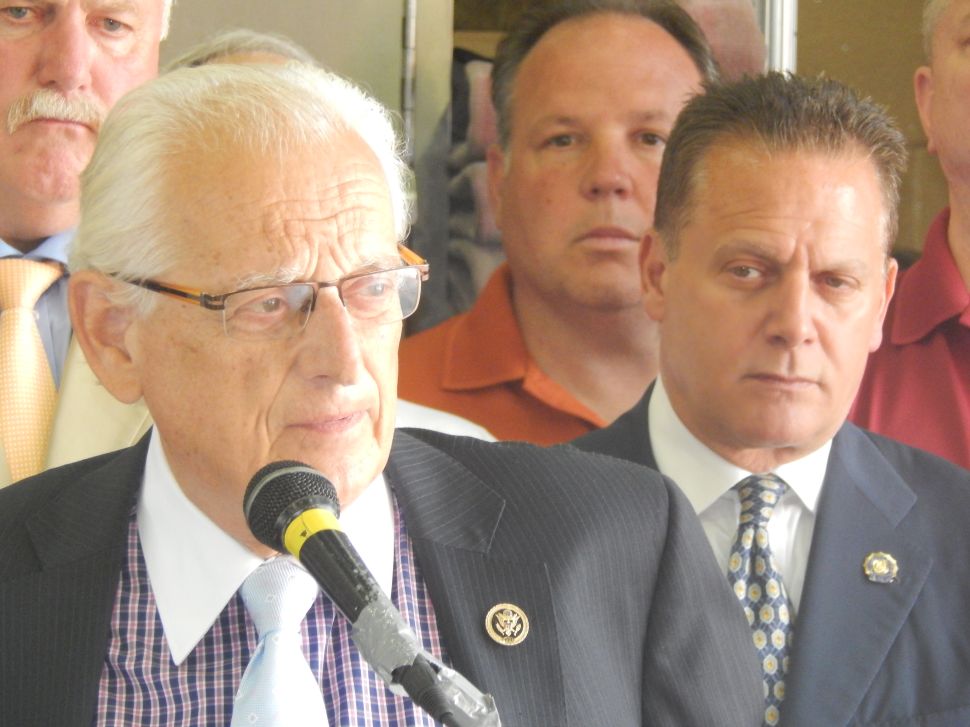