I remember the first time I saw Wet Hot American Summer. It was June of 2002, my own “Wet Hot” summer before I left for college, and I was in the basement of my new friend Justin’s house after a Rufus Wainwright concert. Justin played hockey, and we had gone to third base. This was only notable because I was sandwiched between him and his best friend Jason, who played guitar, and with whom third base had also occurred.

It was awkward, to say the least: not merely because both boys were a little bit strange–though they were, to the extent that I would come home for winter break only a few short months later and learn that they’d both been institutionalized after an FBI raid (or so the legend went) of their tinfoil-wallpapered apartment where Justin had been running a scam to sell “rare pennies” on E-bay that turned out to be just regular pennies–but because, you know, I was sitting with two dudes who had both tasted the inside of my mouth.

They assured me I was about to watch “the funniest movie of all time,” which I hoped wasn’t code for “We’ve decided to do group sex while you were in the bathroom.” In my defense, I had never seen The State, the MTV show that launched the careers of the brilliant minds behind Wet Hot American Summer’s leads (Michael Showalter, Joe Lo Truglio, Ken Marino) and its director, David Wain. I had a lot of learning to do.

Over the course of the movie, which follows the counselors and wards of Camp Firewood, a Jewish summer program in upstate New York, on the last day of summer, I went from nervous giggling to deep, out of control laughter to straight peeing myself from laughing so hard. Not a lot, just a little bit. But still, by the time Coop (Showalter) confesses to Katie (Marguerite Moreau) that:

I was sold. And though I missed the obvious Nora Ephron parody, it didn’t really matter. Wet Hot American Summer was the brilliant kind of satire–up there with Airplane!, really–that didn’t rely on its source material so much as mine it for hilarity. Combining slapstick with absurdism (“THE PHONE, THE PHONE, WHERE’S THE FUCKING PHONE!!“) anti-comedy (the prolonged sequence of Paul Rudd knocking down and picking up his tray in the cafeteria) and insanely baller casting (Bradley Cooper and Michael Ian Black’s uncomfortably intimate sex scene in the shed), this movie hit some special combination of synapses in my brain that at the time would have liked nothing better than to say in a prolonged state of arrested development. It was, no lie, probably the most formative film I had seen up to that point in my life.

So through no fault of its own, Wet Hot American Summer: First Day of Camp, the prequel series out on Netflix today, suffers from the comparison. I don’t know if it’s possible to go home again, but I know it’s harder to find something revolutionary when you’ve seen it before. Nor does WHASFDC try to distance itself from its urtext. Much of the fun in the series comes from knowing exactly where the punchline is going to pay out (spoilers ahead): Abbi Bernstein, the make-out slut of the film, turns out to be not a counselor but a camper who hit puberty early; the random talking soup can voiced by Archer’s Jon Benjamin is now given a mutant backstory; sexy Lindsay who tastes like a burger is actually an undercover reporter who also doesn’t know how much barbecue sauce she has on her face and Gail’s former husband turns out to be Vietnam-scarred cook, Gene.  Much like the Marvel franchise, Wet Hot is populated by origin tales that are piggy-backing on your knowledge of what lies in store for these characters.

Watching Wet Hot American Summer: First Day of Camp didn’t make me pee myself at all (I checked). But that can’t be the litmus test for every good piece of art, or I’d have to wear diapers everywhere. Ultimately, I’m putting the star-studded cameos (be on the lookout for the recently unemployed cast of Mad Men!) and the sometimes-juvenile antics of the show alongside the amazing tertiary material originally deployed by the DVD extras of the film: like the ability to watch Wet Hot American Summer with an added fart soundtrack, First Day of Camp makes for a good addition to the franchise without quite living by its own merits. 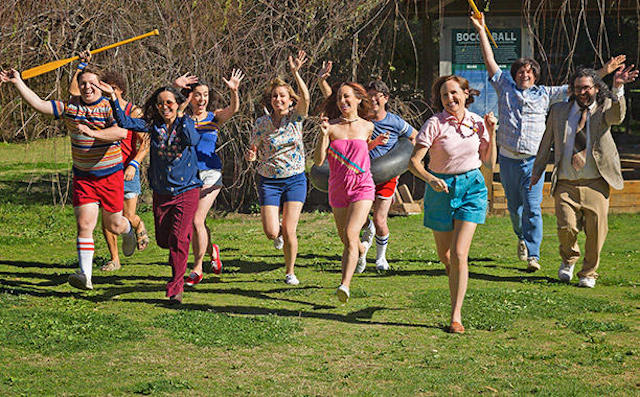