On the heels of announcing his own immigration reform platform today, Martin O’Malley said he could not compare his views on the issue to Hillary Clinton’s–because he does not know what they are.

Mr. O’Malley, a long-shot contender for the Democratic nomination for president, drew some laughter from an immigration roundtable in Manhattan because he appeared to be taking a dig at Ms. Clinton’s sometimes vague policy prescriptions.

“I’m not aware of what her’s might be,” Ms. O’Malley, the former Maryland governor, said when asked how he’d compare his platform to Ms. Clinton’s. “I would if I did but I don’t.”

Mr. O’Malley has been trying to gain traction against Ms. Clinton and Vermont Sen. Bernie Sanders, who has fired up liberal voters unsatisfied with the former secretary of state, by unveiling a series of detailed policy proposals. While Ms. Clinton has used mostly broad strokes to describe where she stands on controversial issues–in May, she spoke out in favor of President Obama’s executive action on immigration and said she’d extend deportation relief to undocumented immigrants–Mr. O’Malley is hoping voters are hungry for more specifics.

At an immigration roundtable hosted by New York Immigration Action Fund, Mr. O’Malley said he would push the “ball further down the field” than Mr. Obama on immigration. He called for an expansion of deferred action, waivers for legal immigrants who are barred from re-entering the U.S. for three to 10 years, expanding access to naturalization and healthcare for immigrants, ending immigration detention centers, and creating an independent agency to set American immigration policy, among other proposals.

Mr. O’Malley repeatedly referred to undocumented immigrants as “new Americans” and spoke of his own Irish descendants who faced discrimination more than a century ago. He boasted of passing the Dream Act, which gives college tuition assistance to undocumented immigrants, when he was governor of Maryland, and became the first of the five candidates running in the Democratic primary to extensively detail how he’d overhaul America’s flawed immigration system.

“We need to reform a system that is callous, irrational, inhumane, and unjust by providing immediate relief to millions of new Americans and fighting for immigration reform to bring our neighbors out of the shadows,” Mr. O’Malley said. “After all, the enduring symbol of our nation is the Statue of Liberty, not a barbed wire fence.”

Mr. O’Malley’s approach to immigration was a sharp contrast to the most conservative Republicans in the presidential field, including billionaire Donald Trump. Mr. Trump drew condemnation from many Democrats and a few Republicans for proclaiming recently that Mexico is sending their “rapists” to the United States.

“I think members of the Republican Party should be very proud of Lincoln and I think Lincoln would be very ashamed of that sort of hate speech,” Mr. O’Malley told the Observer.

Many Republican primary voters, particularly in early voting states, are hostile to new immigrants and consider illegal crossings of the border a top issue. Latino and Asian voters, however, still overwhelmingly vote Democratic, and both parties are expecting an emerging nonwhite vote to play a key role in the 2016 race. 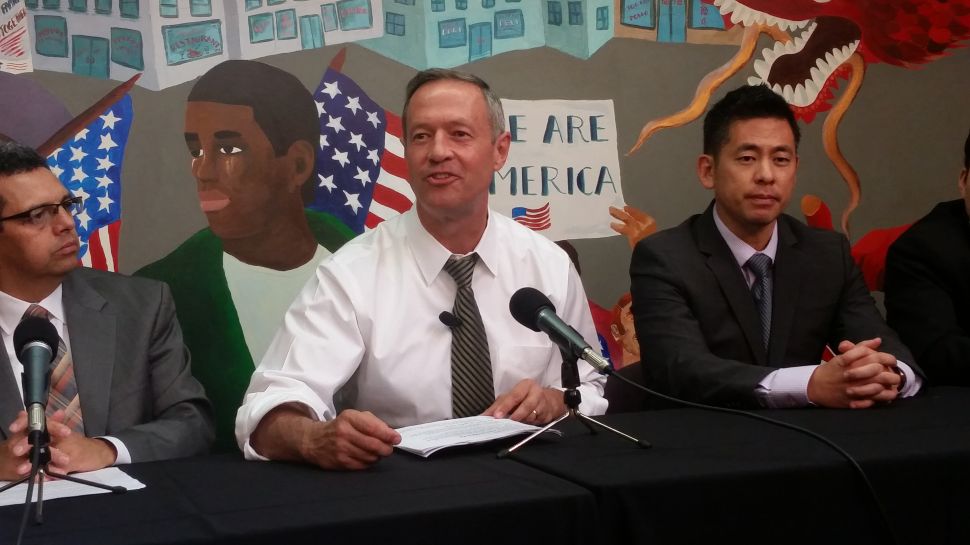